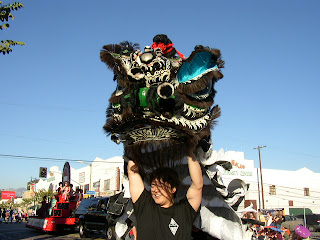 You may or many not have been wondering what the Militant has been up to the past week or so, but to cut a long story short he spent it in his Compound's Sick Bay. Cold weather worsened his condition and he elected not to bore you readers to death by writing posts about the wonders of local HDTV sub-channels, of which the non-television watching Militant was forced to spend his time on while recuperating.

But Saturday was a whole 'nother story. He had gotten well enough to not only step outside the compound, but the 80-degree sunny and smogless Winter day was an instant lure to get his Militant Ass back on his bike and huff it down Sunset to Chinatown. For it's Chinese New Year, and there be a parade goin' on!

Over a hundred thousand people or all sorts of shapes and colors joined the Militant to see the 109th annual Golden Dragon Parade, organized by the Chinese Chamber of Commerce of Los Angeles, is the City's ushering-in of the Lunar New Year, this time being the Year of The Rat.

The Militant arrived in time to park his bike at the Chinatown Branch Public Library and wander about, as the parade was already going on at Hill Street (the rest of Hill across the freeway was where the parade assembled), and would make a U-formation back down on Broadway, so he cut across the street to see the parade in its entirety. 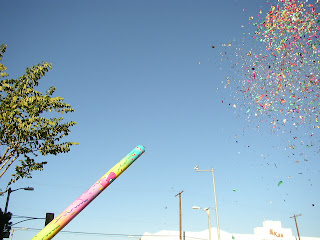 The streets were already strewn with multicolored confetti, and in some places, burned-out red paper firecracker shells. The Militant soon learned that vendors sold $4 bazooka-like tubes of "Party Poppers" which, after a careful twist along its bottom, caused a spontaneous explosion of colored paper and foil bits (pictured left), which got carried by the wind into various directions. Most of the confetti pieces were curly, and the wind blew them into sections of the street where they accumulated over the duration of the parade. 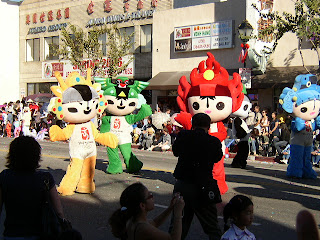 The parade included the usual parade amenities: floats, dignitaries, marching bands, drill teams, but a Chinese New Year parade always has much more: martial arts displays, beauty queens, benevolent associations, drums, gongs and most of all -- lion and dragon dances. An added bonus this year was the inclusion of the Beijing 2008 Olympic Mascots (pictured right - and no one seemed to turn their backs this time).

At one point in the parade a CNN reporter and cameraman went around the crowd. The reporter was instructing the cameraman to film people speaking in Chinese, and was a bit frustrated when she couldn't find too many people speak the language. Umm...why not show the diverse array of Angelenos who were there to enjoy the parade and take in Chinese culture than to show the rest of the world that this parade was just a mere "Chinese thing?"

They did find a few Chinese-speaking people to film (not interview).

It was a great parade, on the best of all possible days, weather-wise. But 3/4ths into the parade it seemed to drag on. Finally, at the end, after the last dragon dancers, the crowd joined the parade and marched south on Broadway to a festival on the corner of Cesar E. Chavez and Broadway. But that wasn't all -- even after the parade, the sound of seemingly endless firecracker explosions and drums and gongs reverberated along the urban canyons of the Chinatown streets, including a group of lion dancers visiting various businesses on North Spring, in the shadow of a very-crowded Chinatown (M) Gold Line Station (Many people went Metro today, nice, nice!).

In years past, the Militant would visit Chinatown in the evening of the first Saturday of Chinese New Year and find nothing but long-burned-out firecracker shells marking any sign of a celebration. But now Chinatown seems more alive, happening and willing to party like it was 4706. 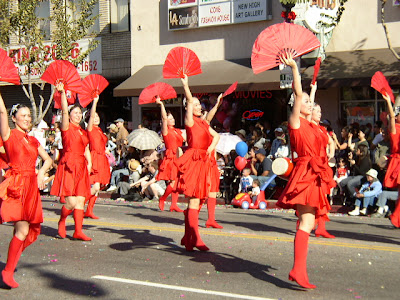 Seeing Red: A dance troupe performs with their loyal fans. 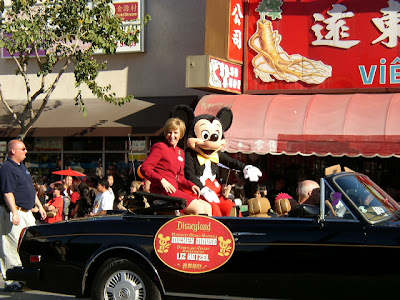 Oh Mickey You're So Fine: Yes, the Disneyfication of a community event is lame, but hey, when it's the Year of the Rat, why *not* have the world's most famous rodent as your Grand Marshal? 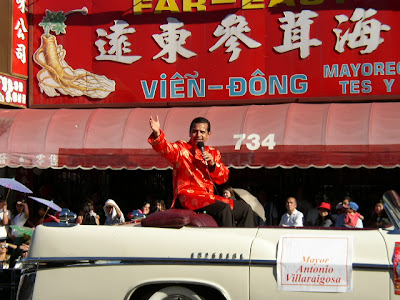 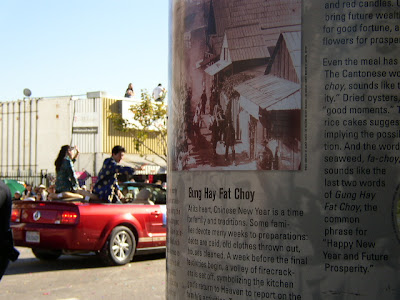 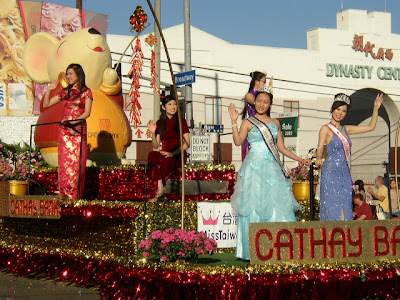 Wave Like This: Miss Taiwan(-Los Angeles, the Militant assumes) and her court greets the paradegoers along Broadway. 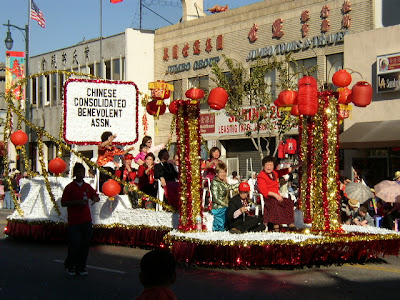 We Built This City: Benevolent Associations like the one above were responsible for building today's Chinatown. 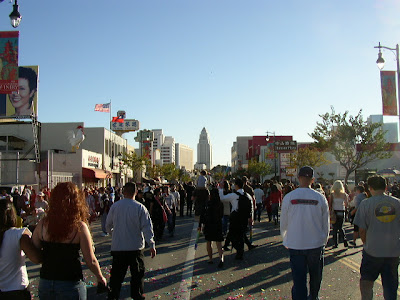 Join In The Parade: The crowd spills onto Broadway at the tail end of the procession. 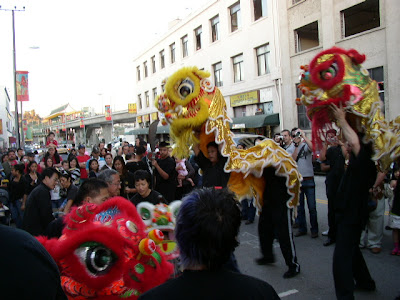 (Lion) Dancing In The Streets: A troupe of lion dancers, accompanied by drums and gongs, overflow onto North Spring Street and tell the evil spirits to haul ass.
Commandeered by Militant Angeleno @ 6:25 PM

You have an extremely fine blog.

great post! the san gabriel valley is having its parade on the 16th. some deets on my blog.

great photos! i can't believe i missed this. :(

I took it for granted you are not a photographer but it seems I am wong...

I too was in Chinatown for the Firecracker 10k & 5k run/walk. My pics were horribly low res and placed in my xanga blog ( if you search (xanga) firecracker you might see my name).

I believe the last Chinatown parade I went to was when Bruce Lee was Grand Marshall....(back in the 1970)