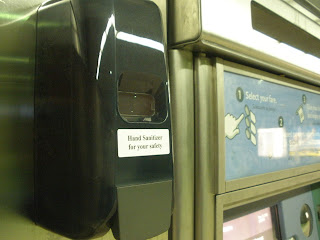 It's been in the news, out of the news and back in the news again, but the Swine Flu may or may not have been on everyone's mind.

At the peak of the disease's fame in late April/early May, the Militant recalled sharing an elevator ride in the North Hollywood Red Line station with a dozen other folks, two of whom tightly covered their mouth and noses with their shirt or a piece of cloth. The Militant started to laugh, but realized that he, too (though for Militant reasons only) was already wearing his camouflaged bandana mask over half of his face.

But the Swine Flu has certainly been on the minds of the folks at Metro, who've recently installed hand sanitizers next to the ticket machines at various stations (pictured). Interesting touch, to say the least, though the Militant wonders how the transit agency will deal with any sort of sanitizer goop, which, as you can see, already forms on the wall. 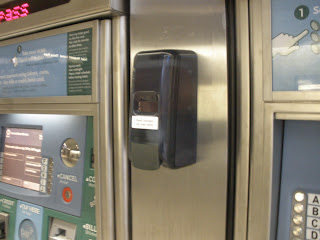 The Militant also wonders how long they will be there, and whether they're only there as long as the Swine Flu thing remains in the headlines or not. It must have cost some money to install them (and to purchase the sanitizer gel) and certainly it's gonna cost some money to remove them, if that happens. Or maybe it's a shape of things to come. If you got dry skin, try the (M)etro (M)oisturizer dispensers at the Red Line stations! And the Militant wonders if Metro already has some sort of health epidemic line item in their budget to provide these. But isn't the TAP system they're trying to fully implement supposed to be a contact-less technology?
Commandeered by Militant Angeleno @ 10:25 PM