SGV Week: The Militant Is On A Mission 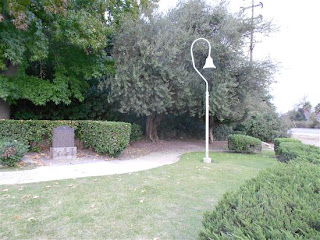 The Militant wanted to start off San Gabriel Valley Week with a post on the eastern glen's namesake and cradle of civili...er...Western civilization - Mission San Gabriel Arcángel, located in its eponymous city.

It was founded on September 8, 1771 - a full decade before the City of Los Angeles was founded.

But what most people aren't aware of, is that the stately mission, which has withstood centuries of earthquakes, and has flown under the flags of four nations, isn't even the original San Gabriel Mission.

The mission is actually the San Gabriel Mission 2.0.

History is a sticky thing. Though the founding of the 21 missions of  Alta California were credited to one Fr. Junipero Serra, the actual on-site founders of the San Gabriel Mission were padres Padro Cambon and Angel Somera. And it wasn't even planned to be in the San Gabriel Valley -- the original location was along the Rio de los Temblores, now known as the Santa Ana River. Yes folks, the SGV could have been located in the OC...

But they founded the O.G. San Gabriel Mission some 20 miles northwest along another river - the Rio Hondo, which, at least in that location, still flows  in its natural state.

The new transplants moved into the neighborhood next to the native Tongva villages of Shevaangna and Isanthcogna (you do know your Na's by now, right?), where they reaped the benefits of the riparian environment and grew crops. Newly-founded missions didn't yet comprise of a large stone church and neighboring adobe buildings -- they resembled forts with temporary wooden structures.

In 1776, a large flash flood oveflowed the banks of the Rio Hondo and flooded their compound. So the padres packed up and moved five miles to the northwest, a good distance from another river - the San Gabriel River - yet close enough to access it. The mission building that we see today wasn't built until the early 1790s.

The O.G. mission site, known as "Mission Vieja" (no, not Mission Viejo) is long gone, but a little-known monument stands on its site -- on a mini-park on the corner of San Gabriel Boulevard and Lincoln Avenue, right at the edge of Montebello. It's a simple landscaped corner with a familiar El Camino Real bell and a stone marker which reads: 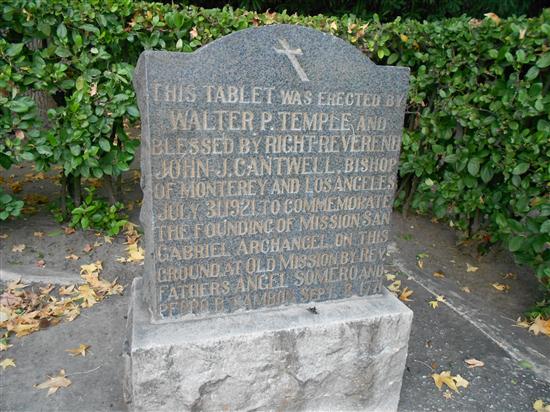 Take note of some of the names, especially "Walter P. Temple." We'll get to that name later in San Gabriel Valley Week! 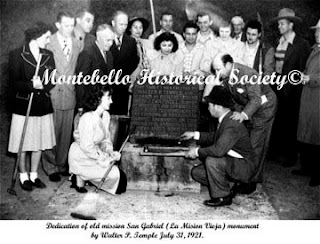 The marker was dedicated in 1921 to mark the sesquicentennial of the founding of the mission. Pictured right is a photo of the dedication ceremony. The site is also a California Historical Landmark (#158). It's easy to miss, and it's nearly impossible to park there, though there's a dirt clearing  just past the Montebello City Limit sign on Lincoln Avenue that could fit a car. Of course, the Whittier Narrows Recreation Area is full of awesome bike trails, and you can ride all over the place, and visit the nearby Bosque del Rio Hondo park just across San Gabriel Blvd, or ride on the Whittier Narrows Dam about a mile to the south along the Class 1 bike path. Score one for bikes in the SGV!

The San Gabriel Valley, built on history, seems to celebrate it, as well as the vast natural expanse of the Whittier Narrows area. There may or may not be more of this...stay tuned!
Commandeered by Militant Angeleno @ 11:27 AM

I had no clue there was an old SG mission site. I guess I wasn't paying close enough attention in 3rd grade when we studied the missions.