The Giant Donut Capital of the World 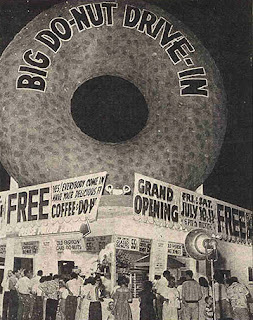 It's the first Friday of June, which means it's time to wish you all a Happy National Donut Day!

Of course, though this might seem like one of those hashtaggable "#National[Food Name Here]Day memes that get bounced on Twitter to provide the social media peer pressure of supporting a manufactured capitalist holiday meant to drive up sales of the said food item, National Donut (or Doughnut) Day has apparently been around since the 1930s.

The Militant noticed something while traveling around the South Los Angeles/South Bay area recently -- there's an awful lot of donut establishments with giant donuts on the roof. In fact, some 80 percent of America's giant donut establishments are right here in Southern California. We are the Giant Donut Capital of the World, and don't you forget it! The world-famous Randy's Donuts is the best-known example, located near LAX, and having the distinction of being the only giant donut establishment in the world to have a Space Shuttle pass by outside its doors.

But there are others, too; namely Kindle's Donuts on Century Boulevard and Normandie Avenue (where The Militant enjoyed a rather large Texas Twist donut with a cup of coffee), and Donut King II on Marine and Western avenues in Gardena.

Why the large concentration of giant donuts?

It just so happens there's a connection. In 1950, a local chain called "Big Do-Nut Drive-In" (believe the hyphens) opened 10 locations across Southern California. It was started by an entrepreneur named Russell C. Wendell, who sold donut making machines. With the rise in popularity at the time of drive-thru burger joints (like this one we all know and love), he felt the same could apply to donuts (or do-nuts). Most of his locations, designed by architect Henry J. Goodwin, had a 32-foot-diameter gunnite donut atop the building, angled towards the intersection. He opened the first location in Westmont (now Kindle's Donuts), followed by one in Inglewood (now Randy's Donuts), Gardena (now Donut King II), Culver City, Compton (now Dale's Donuts), North Hollywood, a second Inglewood location, Bellflower (now Bellflower Bagels), Van Nuys and Reseda. Five of the locations that are not currently in operation under another name have met the wrecking ball.

The Big Do-Nut Drive-Ins lasted a little over 25 years, as Wendell sold the stores to individual owners in the 1970s who continued their use as a donut shop. Wendell continued on in the drive thru restaurant business with another now-gone icon: Pup 'N Taco, which lasted from 1965 until Wendell sold the chain to Taco Bell in 1984.

These are the locations of the 10 Big Do-Nut Drive-Ins: 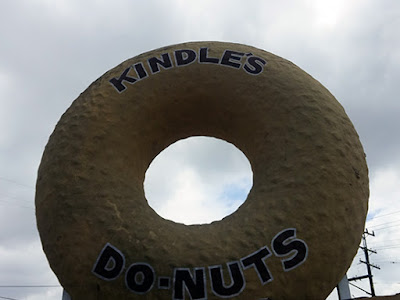 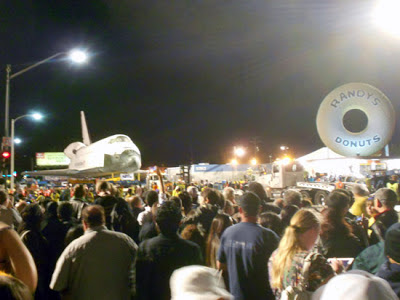 2. Big Do-Nut Inglewood - Manchester (Randy's Donuts)
1953
805 W. Manchester Blvd
Total So Cal icon. Purchased by Robert Eskow in 1976, named it "Randy's Donuts" after his son. In 1978 Eskow sold the shop to his cousins Ron and Larry Weintraub, who still own it today. Open 24 hours. 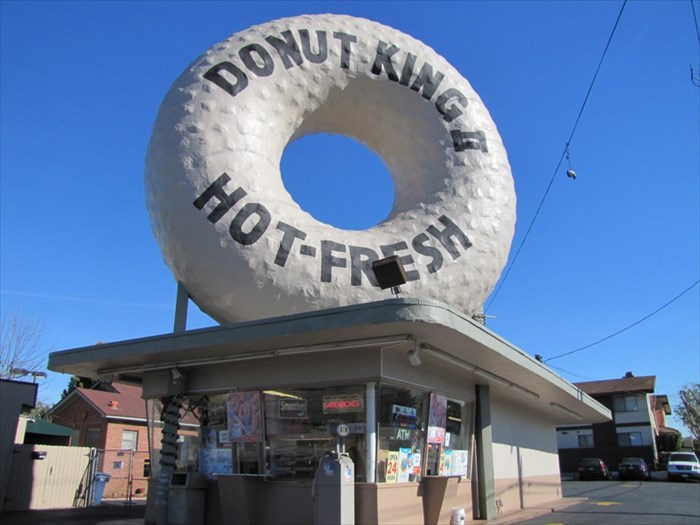 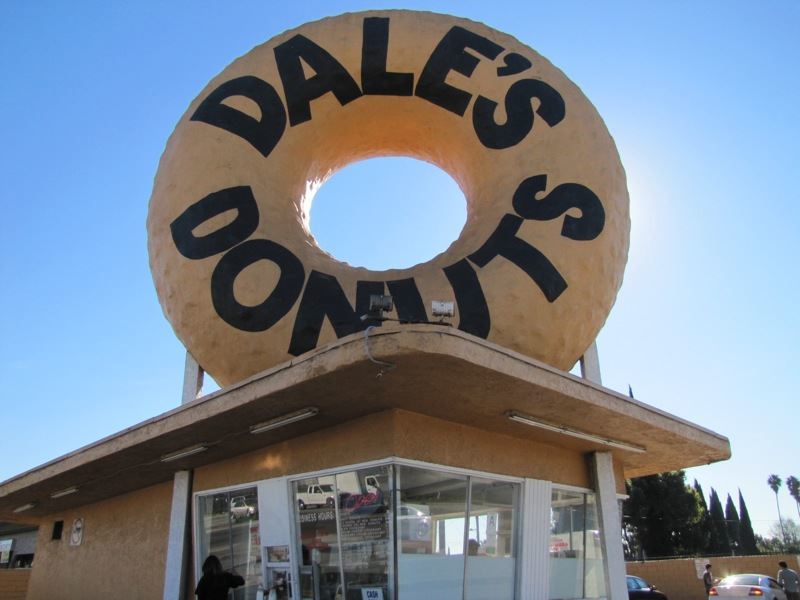 8. Big Do-Nut Bellflower (Bellflower Bagels)
17025 Bellflower Blvd
This location had the smaller, 23-foot-diameter donut. It is the only surviving Big Do-Nut Drive-In that is not operating as a donut shop per se -- although donuts are sold here. 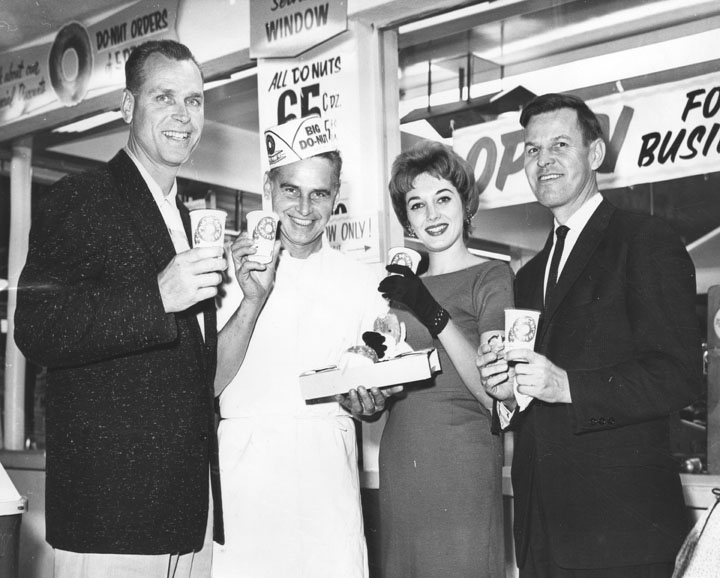 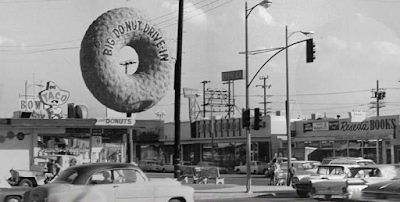 But Big Do-Nut wasn't the only giant donut game in town...There was also Angel Food Donuts which also started in the early 1950s. They boasted over twice as many stores as Big Do-Nut (21), but not all of them featured a giant donut, though most had much smaller donuts than Big Do-Nut. Fortunately,three of the giant donut locations still survive today, with the big-ass donuts intact:

Dunkin' Donuts (You gotta give credit to an East Coast transplant's effort to assimilate...though it was quite a struggle at first)
5590 East 7th Street And while Big Do-Nut was the first drive-thru donut shop, this combo breaker outside of the South Bay area -- in the San Gabriel Valley, of all places, featured a donut shop that you can literally drive through. It was part of a small chain of The Donut Holes in the area, though this one on Amar Road was the only one with a giant donut, which appeared partially buried into the ground, and was a chocolate donut. Anyways, you can still come to this one anytime -- it's open 24 hours.

So for National Donut Day, don't waste your time at just any donut joint, go big! Go grab your donuts at one of Southern California's unique giant donut establishments. And if you do, Tweet a selfie from one (or more) of them with the hashtag #GiantDonut !
Commandeered by Militant Angeleno @ 4:21 AM

Nice post! I was the location scout whose idea it was to have Iron Man inside the Randy's Donuts hole in "Iron Man 2" (the scene with Nick Fury was originally scripted as a S.H.I.E.L.D. facility). This video demonstrates the scout photos alongside the final scene -- https://youtu.be/XOz1hx49tVE (you can skip to around 02:30). Anyway, at one point during prep, we were having some permitting difficulties with the Inglewood property owners (we obviously got it all worked out), so I had the pleasure of scouting ALL of the other giant donut places (every extant one that you mentioned) as back-up options, just in case. That was a fun day of exploring, photographing, and... sampling donuts. TRIVIA: Randy's Donuts does not have a public interior, so we shot the inside scenes at the Yum Yum Donuts in Playa Del Rey, Los Angeles.

What year did the Culver City doughnut meet it's demise?

What year did the Culver City doughnut meet it's demise?