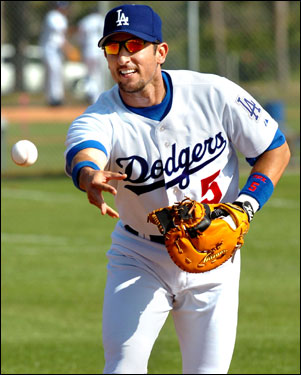 Did you hear? It's the biggest buzz around town. One of Los Angeles' biggest celebrities is moving to a new location. No, you fool, it's not that that herpes-infested attention whore heiress getting out of jail like a game of Monopoly (This Militant knows full well all of that is a conspiracy by the East Coast-Controlled media (remember, the media is not controlled by Hollywood, but by Madison Avenue, NYC) to further bash on its far west colonial outpost in order to make it look culturally inferior to the rest of the country), but that SoCal native Nomar Garciaparra is moving to third base.

The Militant knows that a good number of you who read this are diehard Dodger fans, so I need not reiterate what's been already said. But for those of you lowlifes who proudly wear your Yankees or Mets caps or even insist that the "Bums belong back in Bwooklyn," I'll just say that a popular Los Angeles Dodger and fan favorite has moved his position both on the field and in the batting lineup, making room for young slugger James Loney to start at first base. And for those of you who wear those black caps with the red "B" on it, I'm going to take this opportunity to remind you that Nomarrrr - with rolling r's (not "Nomah") was born and raised in the Los Angeles area and not anywhere near Boston, despite what you all were led to believe all these years.

All I'll add to this discussion is my unyielding thought since late October 2006 that the key to success in the 2007 Dodger season is not "Nomar or Loney" but rather "Nomar and Loney." Nomar is a true gamer, he's going to rock 3rd base and frankly I think he got tired/bored at 1st.
Being closer to his classic position is gonna reinvigorate his playing style and I do believe he will be able to escape major injury this year. Remember when Brad Penny had his sudden, random "owie" back in '04, and how we though he was done? Look where he is now. Offensively, maybe it's because I still like the sound of (native Los Angeles band) WAR's "Low Rider" being blasted in The Stadium, but I think his offensive move to 6th will give him something to prove, after All Star-To-Be Russell Martin has without a doubt earned his lineup spot. And even if he doesn't bash any more game-ending walk-off homers like Nomar '06, Whittier's Wonderboy can still get the hits to get on base for 7th spot James Loney to drive in. I mean, we all want those countless OCD-fueled velcro glove strap adjustments at the plate to mean something, right?

Loney, on the other hand, after spending the past few months in Triple-A limbo and being more associated with "platoon" than Charlie Sheen, can simply concentrate on his game, now that the level of his Trade-ometer has lowered somewhat.

Welp, the game's on in a few minutes on KCAL. I think it'll be another good one. Besides, Gonzo's playing back at the airplane hangar and Andre Ethier is gonna work hard to impress his friends and family out in the Surface, er, I mean Valley of the Sun. Everyone knows how good ballplayers are when they play against their former teams or hometowns...at least it always works against the Dodgers...

Yeah, totally agree with you that Nomar is going to a position that better agrees with his talent. I really respect the fact that he's moving without any whining, that really shows what a valuable team player he is. And I love to hear Lowrider when he's at bat!

Duude. Nomar hasn't had a hit in days. Loney rocks!