My Name Is Los Angeles, And I Am Beautiful 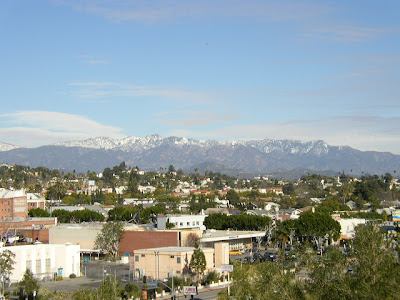 The first day of sunshine after a winter rainstorm is usually the day postcard photographers scramble to take that moneyshot of the Downtown skyline and the snowcapped San Gabriels. When the Militant headed out today to perform a couple Militant duties, he looked northeast and saw them. Beautiful is the word of the day. Later, the Militant biked up Olive Hill at Barnsdall Park, took some pics, and just sat down and enjoyed the view. This was the first time in a long time where he recalled the snow level being so low. 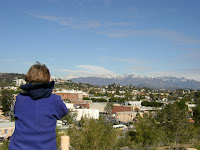 He obviously wasn't the only one armed with a camera (pictured right). He saw at least three other photographers snapping the newly-blanched local mountains, some with fancy gear with telephot lenses, some digital cameras, some simple point-and-shooters.

The Militant found a social atmosphere as those of us who took pictures of the same thing commented on how beautiful they were. The Militant recommended to another photographer an even better vantage point in the park, unobstructed by buildings or trees. He also chatted with the woman above who had just pulled her car up alongside where the Militant was. The woman, in her 60s, commented that she had lived here for nine years and would like to share the pic to her friends in the East Coast, who think that the west is devoid of any beauty, just to prove them wrong.

She also commented on how the mountains to the west (the Verdugos) were more snow-covered than the San Gabriels. She assumed they were taller, but the Militant explained that the San Gabriels face the city, which is warmer because of all the concrete, and that the Verdugos are much closer to the forest, where the distance from the urban heat island keeps the temps down.

As the Militant types this, the grey skies are back. He's glad he had the opportunity to see the awesome splendor that towers over the City.

Sure, it snows in other places, even other cities with mountains, but the contrast of the white snow, the blue sky, the brown lower elevations, the greenery of the trees and the various other colors that make up the City displays a spectacular contrast and chromatic variety, as opposed to a homogenized, monochromatic blanketing of snow as far as the eye can see.

There's got to be a metaphor in that somewhere...
Commandeered by Militant Angeleno @ 3:06 PM

Yes, today Los Angeles was certainly showing off her splendor, wasn't she? I took this picture earlier today from out here in North Hollywood. I can actually see the snow from my bedroom window!

Totally agreed. My pics at my blog if you are so compelled.

The day after it rains is always my favorite. If you ever go up hiking, it's the smell of wet dirt and wet pine that is the best, when the air is super fresh and clean.

LA is beautiful any day of the week, even on overcast days. Check it out:

Yes, I agree Los Angeles is breath taking on good days, and on bad days it can flat out take the breath out of you like a nice punch to the gut (well, at least me). Check out this pick I took on the way back from Lake Arrowhead the week of January 22. http://skomalley.blogspot.com/