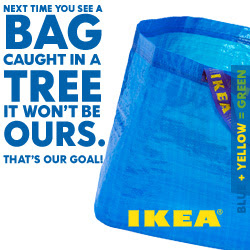 Some of the other local blogs have already reported that Swedish-based furniture retailer Ike...oops, wait, it's all caps...IKEA will discontinue its use of disposable plastic bags by Fall of this year. Since March 15 they have already charged five cents for people who do need the bags, and are encouraging customers to bring their own reusable bags, which they are selling at 59 cents a pop.

The Militant, a frequent reader (and commenter) of rival guerrilla factions, was engaged in commenting to an IKEA-bag post, when he hit the three-paragraph limit and decided to copy and paste the text into Notepad and make is own damn post instead. So here 'tis.

The Militant was at the Burbank IKEA last week to buy an unspecified piece of particle-board material furniture, plus a couple of cheap plastic storage bins (extra kudos to them for having bike parking, and not the cheap-ass wheelbender kind either, though the Militant had to drive there since his purchase weighed over 100 pounds, and that would have been one helluva masochistic bike ride back to the compound). He obviously didn't need any bags but applauded IKEA's effort to reduce plastic bag consumption by 50%. No not because he's some knee-jerk treehugging cliche, but for the obvious fact that those bags are everywhere - on the street, on sidewalks, in alleys, not to mention scattered all over the Los Angeles River. They're also found in our beloved beaches (as any Heal The Bay cleanup volunteer would attest), and worse, they're part of that two-times Texas-sized big-ass floating plastic crap thing (pictured right) currently circulating in the Pacific Ocean.

On a little tangent here, the Militant was eating some imported Japanese chocolate-filled cookies bought recently from a specified Echo Park grocery. The plastic foil package, with a plastic tray inside, contained 10 cookies -- each individually concealed in its own plastic foil wrapping. WTF here? All this plastic just for a few damn cookies?

But as a shopper who has bought reusable bags from other stores, namely Trader Joes, the Militant tends to forget to bring his canvas bag, especially since his TJs trips are mostly spontaneous events. He can leave the bag in his car trunk, but then if he decides to make a bike trip there, he's SOL. Oh well, he settles for paper most of the time, which makes for a convenient container when it's that time of the week to feed the blue bin.

Oh well, its all excuses anyway. But old habits, from both the retail and consumer ends, need to be broken. TJs does give an incentive for shoppers using the reusable bags, usually in the form of a raffle for a gift certificate. Surely the larger chain stores and supermarkets can do it too, and probably will eventually, but what about the smaller mom & pop markets-cum-liquor stores in the hood that all use black plastic bags? What about the local farmer's market or swap meet?

The Militant would love it if there was some rolling clump-like thing that could collect all the plastic crap on this planet (and perhaps result in a plastic mass large enough to function as Earth's second moon). Or maybe some alien Fred Sanfords from outer space would come visit Earth in search of our plastic crap (which would be like gold to them, and toxic waste like diamonds), and declare to the Earth-dwellers, "All Your Plastic Are Belong To Us?"

Oh well, in the meantime, while the Militant monitors his SETI signal feed, its time for us humanoids to fess up and start reducing our plastic waste habits. And not just for total environmental reasons -- plastic is derived from petroleum so the higher price at the pump will affect the price of them bags accordingly. Ergo, you're gonna pay a little more for stuff just because them bags will cost more for stores to purchase.

The Militant already declines to use bags for small purchases. He will commit more to the reusable bag route. Little steps to put this big-ass problem in the bag.
Commandeered by Militant Angeleno @ 3:47 AM

Idea for product I have: A thin but strong bag that somehow can be folded to become a wallet-sized card. This way boys can just carry it in their wallets all the time and never be caught sans bag.

It'd work for girls too, except since we often carry purses, and we already have bags that become small enough to tote in a small purse all the time, it's less urgent a need --

Rumor has it that an unspecified neighborhood council near the Militants secret compound will be offering reusable bags as an outreach ploy!

The Greater Griffith Park Neighborhood Council is giving away reusable bags? The Militant is sooo there.

whoa! I didn't realize those old fogies had a website!