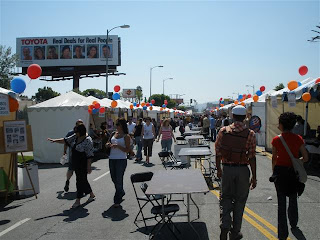 The Militant spent part of Sunday checking out the Armenian Independence Day Festival on Hollywood Blvd, in front of Barnsdall Park. The festival commemorates Armenia's May 28, 1918
independence from the Ottoman Emprire and the creation of a Democratic Republic of Armenia, (which was short-lived after its annexation into the Soviet Union two years later). But hey, any cause for celebration is something the Militant is down for.

In its third year, it's nowhere near the size and scope of the nearby Songkran (Thai New Year) Festival, though an Armenian community operative who was somewhat involved with the festival informed the Militant that previous years had a much larger attendance. 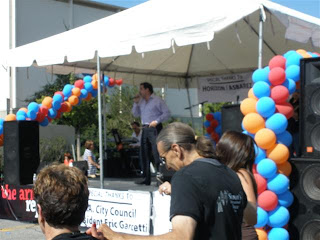 It was largely a chill affair, with an entertainment stage on the east end with traditional Armenian music and a lively line of people dancing along (pictured right), two rows of food, information and product booths in the middle and a kids' area on the west end.

The Militant spent most of the time hanging out with his Armenian community operatives in an unspecified booth as he ate his chicken/lule kebab combo plate from the kebab tent. There weren't too many choices, but aside from the kebab vendor, the soujouk (think Armenian torta) booth was pretty happening.

The one thing that the Militant found intriguing was that a row of tables and chairs were placed in the middle of the street, and many people took to them, just to converse (one of the Militant's operatives was caught up in a 2 1/2-hour socio-political conversation with a local resident) -- a fairly common scene in Armenian cities as they are great users of public space. The Militant noticed that this cordoned-off section of The World's Most Famous Street functioned as a bona-fide public space, if only for a day. 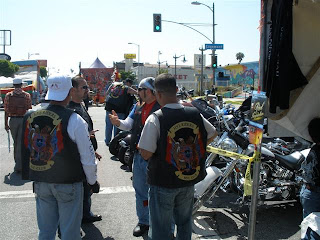 The Militant took a relatively short ride over to the festival, but saw many other people walking their bikes through the festival area and notices a few other operatives doing the same. Speaking of bikes, there was a booth for the other kind of bikes (the big, noisy ones) organized by an Armenian American motorcycle club called the "Hye Riders" (pictured left). Too awesome.

The nearby Hollywood Presbyterian Medical Center had a health info booth and gave away free HPMC t-shirts in Armenian (incidentally the logo of the hospital's Korean owner, CHA Health Systems, bears the same red-orange-blue tricolor as the Armenian flag). One of the Militant's operatives informed him that it just read, "Together we're Little Armenia." And yes, the Militant, ever the lover of free swag, got one.
Commandeered by Militant Angeleno @ 10:56 PM