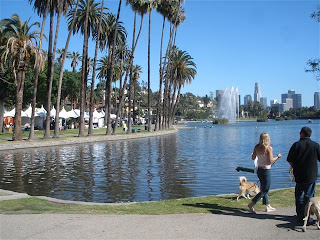 Normally around this time of the year, the Militant heads over in an unspecified direction on his bike to Echo Park to partake in the three-decade-old Angeleno tradition known as the Lotus Festival. After all, he was there in 2007 (all three days, even!) and 2008.

But this year, due to the budget you-know-what and the apparent lack of lotus plants in the lake (see for yourself - pictured right), there was to be no "Lotus Festival" per se in 2009.

Enter the Echo Park Chamber of Commerce, who stepped in and put on the "Echo Park Community Festival" as a surrogate to the great Lotus Festival.

The Militant wanted to check it out. Before anyone did any planning, word was that it would be, by all accounts, a "Scaled-Down Version Of The Lotus Festival."

When the Militant arrived, it certainly sounded like the Lotus Festival - the sound of music coming from the main stage, the combined murmur of a crowd, children playing and the midrangey call from the microphone at the information booth.

There was also some Lotus Festival infrastructure to be found, especially in some of the EPCF's signage, which happened to be the signage used in the Lotus Festival.

The community health and nonprofit outreach booths along n the western shore of the lake looked the way they usually do, with most of the same groups present. The area in the northwestern corner of the lake, which recently hosted crafts and plant vendors, along with the garden exhibition - not so much.

The festival's midsection of crafts and merchandise vendors also looked the same, along with the Children's Area. The central portion, again, not so much. The large performance stage was replaced by a tiny little tent. 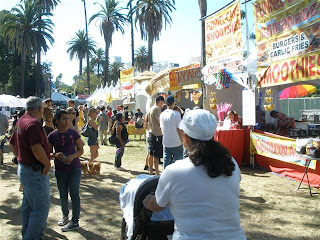 The crowds were noticeably smaller, but not scant. The good thing about the smaller crowd was that it was that the lines for all the food vendors were much smaller, or even nonexistent. The bad thing, well, of course the vibrant human energy that once propelled this park every early July was definitely not there.

The Militant definitely had mixed feelings about this. What was once a cultural festival, enjoyed by all cultures seemed 50% a reproduction of that (the Children's Area stage featured a few Asian/Pacific Islander cultural dance and martial arts performances from previous Lotus Festivals, but the main stage lacked the familiar timbres of Chinese erhus or the rhythms of Japanese taiko drumming. In its place was a DJ playing reggae music and a bunch of indie rock bands (with the expected tight jeans and ironic mustaches abound!). 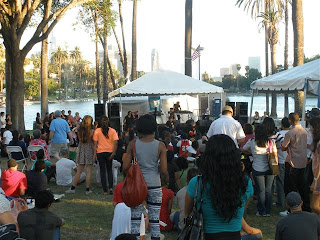 The Militant is starting to get it now -- the gentrified Echo Park (the one that claims this area is "The Eastside") is now staking its cultural claim. You saw it coming.

Of course, the sounds of the gentrified Echo Park already has its own venue, where anyone can go to watch the hip-stars play each and every night of the week, but for many of the artists and performance groups from the Lotus Festival, they have clearly lost a venue and an audience.

To the Militant's surprise, he spotted a handful of Los Angeles City Recreation and Parks staff, who normally run the Lotus Festival, managing the Children's Area stage. When the Militant told them that he didn't expect to see them here, one of them replied, "We didn't either!" The unspecified RAP staffer also explained to the Militant that although the community's Chamber of Commerce was running the show, Mayor Villaraigosa didn't want to let this thing go completely and insisted that a certain number of RAP staff work this festival. After all, the park is still a City facility.

And those of you wondering about the dragon boat races? Despite the symbolism used in the EPCF logo, no dragon boat racing for you! But there will be a fireworks display, albeit on Sunday night and not on Saturday night (the Militant, originally planning to stick around past dark, found this out on Saturday and decided to leave not long after learning about the new fireworks night). So if you wanna get some more of your July pyrotechnics on and listen to the "Echo" in "Echo Park," get here by 8:30 p.m. The Militant may or may not be there.

The Echo Park Chamber should be commended for putting on something, though there was an energy, tradition and anticipation that was clearly missing here. The Lotus Festival may or may not return next year, but if history is an indicator, it has gone off-line before, in the late '70s and mid-'80s. The Militant, and many other Angelenos, anxiously await its return.
Commandeered by Militant Angeleno @ 3:33 AM