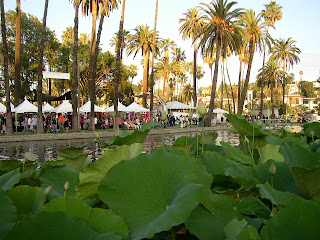 The Militant digs the Lotus Festival because it represents Los Angeles at its best: a cultural festival enjoyed by people of all cultures and ages, under a perfect summer day set to a backdrop of a lake with the Downtown skyline looming not so far away. The Militant only caught the last few hours of the festival on Saturday from 7 p.m. onward, but it was enough to capture the whole feel of the fest. It was a true community event as The Militant spotted in the crowd friends, acquaintances and even local photog extraordinaire Gary Leonard, tripod in tow. The Militant treated himself to a combo meal from one of the Indonesian food booths. Unfortunately missing from this year was the Wok Popcorn (What?! It's not Lotus Festival without Wok Popcorn!) and those loud and crazy USC students selling Okinawan-style dangos. For those seeking the cool and icy, there were booths selling Hawaiian shaved ice, Filipino halo-halo, South Asian kulfi bars and Dippin' Dots, the supposed "ice cream of the future" (Hmm, it's already the future now and I don't see Dippin' Dots anywhere else...). The real ice cream of the future, Nonfat Frozen Yogurt, was nowhere to be seen, but you can safely wager that at least one booth will be there next year (Lotusberry, anyone?). 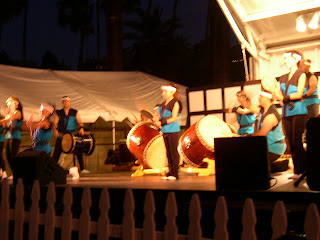 The stunted growth of the lotus bed wasn't too bad of a damper on the day's festivities. The Saturday entertainment program, which focused on traditional Asian/Pacific Islander dance, music and martial arts demonstrations reportedly ran a little late as the first act failed to show up. But otherwise they entertained as well as educated. The Militant caught a Japanese swordfighting demonstration by Westside Kendo Dojo and the perennial Saturday closers, the taiko drum ensemble Yoki Daiko. The multicultural reach of the acts was best exemplified by the latter playing hip-hop rhythms on taiko drums in one number, while an amateur rapper in the audience started waving his arm to the rhythm and spitted out some freestyle rhymes in front of his friends. 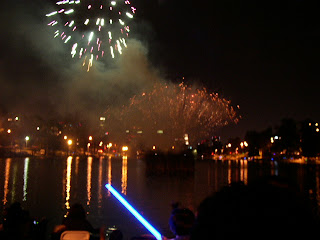 The crowd of some 20,000 people soon formed a ring around the lake as they waited anxiously for several minutes to see the big fireworks display begin. The blue, green and purple glow of inexpensive knock-off lightsaber toys popular with the kids this year provided a ground-level light show in the interim. It only took one echoing "BOOM!" from the display put on by Rialto-based Pyro Spectaculars to amaze the crowd. Their display easily put their previous week's 4th of July Dodger Stadium fireworks show to shame with state-of-the-art pyrotechnics that resembled dancing fireflies and glitter, in addition to more traditional bang-burst fireworks.

Sunday is the last day to catch the 2007 Lotus Festival, if you haven't been there already. The Militant would also like to plug the 2:55 p.m. performance of his friend's band on the main stage. The Militant Angeleno will definitely be there in person. Visit the Lotus Festival website for satellite parking/shuttle information or take Metro Bus lines 2, 4 or 92 to the Park Ave. stop. Or perhaps, you can go Militant-style and ride your bike...

Militant Angeleno Turns One Month Old
This very blog made its very first post exactly one month ago today. In that short amount of time the Militant has made a sudden infiltration into the local blog scene, and theres much more militancy to come. The Militant would like to thank his rival guerrilla factions in the Los Angeles metroblogging scene for their props (and various disagreements over the definition of "The Eastside" -- except for viewfromaloft, who's got it right) and most especially you (No, not you, the one over there...yeah, you!) for your continued readership and interest. Fight The Oppressive East Coast Colonialist Powers, Go Dodgers and Stay Militant, Angelenos!
Commandeered by Militant Angeleno @ 12:04 AM

Congrats on the 1st month. Keep up the good work.

Congrats on the first month.

Yeah congratulations on the first month of your blog. It's very interesting and you're pretty funny.

Has it been a month already?

Wow, how time flies as we travel through life and the blogosphere.

I enjoy your banter very much.