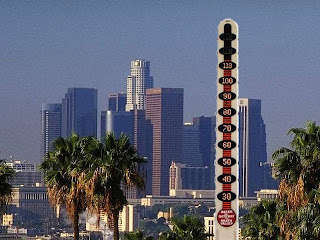 After a Summer of bitching about unseasonably cold temps, after wistfully mourning the end of the Militant's favorite season at the onset of the Autumnal Equinox last week, after biking miles around town listening to Katy Perry's Summer anthem, "California Gurls" spill out of nearly every car stereo on the road, while wearing a jacket, we finally got ourselves a heat wave.

It was hot today.

Boy was it hot.

It was the hottest day ever recorded in Los Angeles history. "113 Dees Grees," as they used to say on KIIS-FM. When they used to play good music.

The Militant fondly remembers the previous hottest day - June 26, 1990. It was only 112 that day. Okay, he hardly remembered that day save for riding home in an RTD bus, which may or may not have had its air conditioning running. He did remember the Bell Biv Devoe tune, "Poison," though. Never trust a big butt and a smile, that girl is...Oh hey! The Militant digresses.

In the year 2030, when the Militant blogs (will they still have blogs then?) about that hot-ass day in 2010 when the weather hit 113, he will no doubt try to recall what he did on that day. And it will be quite a challenge, not because of the onset of old age, but because he spent most of the day...sleeping.
Commandeered by Militant Angeleno @ 9:24 PM

hey militant, where is the giant thermometer in the pic? i've never seen it. love the blog, don't evuh stop!

Tron: Whatup?! Thanks for the props, Tron! LOL, the pic is actually a Photoshopped image of the Bun Boy Thermometer Tower in Baker, CA placed somewhere near Chinatown. The thermometer tower is a familiar sight to those driving on the 15 to or from Las Vegas!