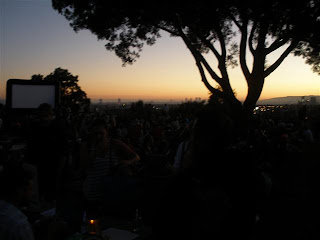 Yeah, the Militant has been blogging about public space quite a lot this week. But hey!

Looking for something to do tonight? Something that doesn't cost too much? Head over to the public space atop Olive Hill known as Barnsdall (Please don't pronounce it "Barnsdale" but "Barns-Doll") Art Park by Hollywood and Vermont before 7:30 p.m. for the third of their Outdoor 'L.A.' Movies series this month, where they screen four films from the past few decades that are set in, and feature the architecture and landscape of Los Angeles.

The Militant was there on the nocturnal outdoor cinema series' first night, coincidentally on Los Angeles' birthday on September 4, and saw 2009's 500 Days of Summer, a film that was shockingly similar to the Militant's life in unspecified ways...But he digresses. It was the perfect climate and vibe up there on the west lawn of Frank Lloyd Wright's Hollyhock House, attended by some 300-plus people. Yeah, there's a few hipsters there (It's just up the hill from Los Feliz Village after all), but the majority are more civilized, educated type folk. Best of all, the move starts right after the sun goes down, and the colorful glow of Hollywood Blvd can easily be seen to the west - the perfect backdrop.

The movie ain't free, but the $10 admission goes to the Barnsdall Art Park Foundation and their programs.

You're free to bring your own picnic a la Hollywood Bowl, or there's about three or four food trucks parked in the lot just north of the Hollyhock House. Parking is crazy since you know everyone else is gonna drive there, but take the (M) Red Line to the Vermont/Sunset station and walk up Barnsdall Avenue to the park entrance stairs, or just bike up there like the Militant did!

Missed tonight's film? Come check it next Saturday for the final screening of the series with 1988's Who Framed Roger Rabbit?
Commandeered by Militant Angeleno @ 4:46 PM

Thank you! It's a pet peeve of mine that perfectly literate and seemingly intelligent people mispronounce the name of the park.

Will: Ya know it!

I know you've been around awhile, but I am rediscovering your charm, wit, digressions, humor, militancy, outrage etc. So I am going to be reading all the posts I've missed, commenting as Mrs. P if I'm so moved, not that you'll prob ever see them (don't know how the comments section works). Anyway, speaking of Australian actors in L.A. set films... have you seen the execrable HBO Mildred Pierce?