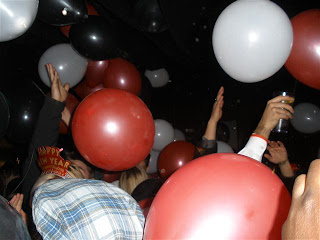 Let's face it, the Militant was a bad Militant in 2010. Not "bad" in the naughty sense (he wishes he were, believe the Militant), but "bad" as in not very prolific. With a paltry less than 70 posts for the entire year, he humbly apologizes to his readers (all 9 of you) for not being a very active Militant in twenty-ten. He didn't even think doing a year-end Militant Year-In-Review post was even worth his time, or yours. Meh. Whatevers.

[The Militant bows his head in shame]

The Militant spent his last few hours of 2010 doing what a Militant usually does, and used Metro's free New Year's Eve rides as reason enough to leave The Militant Compound in his unspecified Central Los Angeles neighborhood and ring in 2011 in Downtown Los Angeles.

Bundled to the hilt in layers so much that none of his camo fatigues underneath were visible, he boarded his Red Line train to Downtown and saw some hyped-up Wisconsin fans, decked in red, in town for The Rose Bowl game (Sorry, kids).

They were wearing shorts.

Of course, with 9-degree temps back in Madison, surely a 40-something night in Los Angeles for them is like 9/27/2010 for us or something. 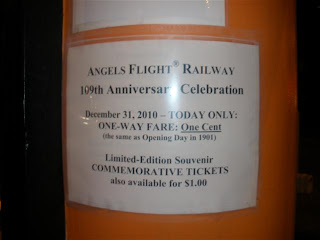 He got off at Pershing Square and soon headed for Angels Flight Railway, which was celebrating its 109th birthday on Friday, its first anniversary since re-opening in March of last year. They celebrated with one-cent rides, commemorative tickets and free prizes at Grand Central Market (dang, missed that one...). As he looked at the clock, it was nearing 10, so he made it up, dropped his penny, and with 10 minutes to go until the funicular closed, intended to be the last Angels Flight rider of 2010.

One car came up, with three ladies inside, who were told by the operator that it was the last ride. He was willing to let them ride back down for the final ride. "Not so fast!" said the Militant, who dropped his penny, and chivalrous dude he is, told the women, "Ladies first..." Muhaha.

The Militant chatted with the ladies, dropped some of his Militant knowledge on the Flight's history and later found themselves partying it up together at an unspecified bar in Downtown Los Angeles to ring in the New Year! Whatup!

At around 11:59 a.m. the TV screens there showed the three-hour-old ABC television broadcast of New Year's Rockin' Eve (this practice needs to stop, Pacific Standard Time people...even the musical performances were taped sometime in November). But behold, it was no longer 2010 but now Twenty Eleven.

Afterward, the Militant and his new operatives all took a stroll through Downtown to see various sights bedecked for the Holidays, such as Pershing Square. We passed total strangers on the street and all of us wished each other, "Happy New Year!" How cool was that?

The Militant headed back to the compound via Metro, which was no longer free, but was running a 24-hour schedule for the night (Too bad the "Next Train" displays were not functioning after-hours - booo!). On Red Line car #543, it sure looked (and smelled) like New Year's: 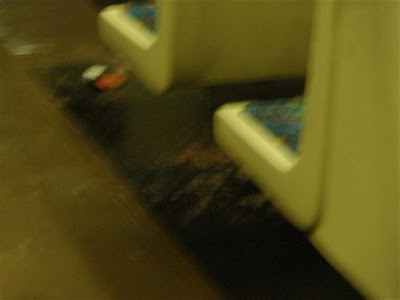 Later in the day, the Militant decided to take his first bike ride of 2010. And like any major holiday in Los Angeles, the streets were pleasantly quiet. He probably passed no more than two dozen cars on his route. It was almost like CicLAvia - he didn't have to wait three months and nine days for it! 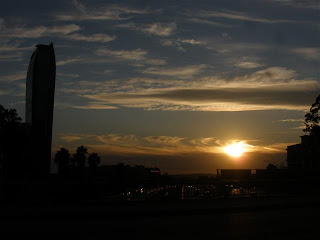 As the first sunset of 2011 approached and back-lit the high-flying cirrus clouds in the cool winter sky, the Militant looked back on a great day, with a new year, new friends and new adventures to come. Where will the Militant be taking you the next 365 days? Stay tuned...and STAY MILITANT!
Commandeered by Militant Angeleno @ 11:18 PM

Happy New Year, MA.If you can come back, maybe even the city nerd can...

Happy 2011 MA! We may or may not have missed each other on Angels Flight by *that* much. Coming back from a show at the Ahmanson Theater I rode it down to Hill Street about an hour before your arrival.

Miles: Don't call it a comeback! The Militant has been here for years! The Militant doesn't wanna speak for the City Nerd, but apparently he may or may not have his own way of doing things...

Will: Actually your Tweet of your 1-cent Angels Flight ride reminded the Militant that he had to head to 4th & Hill before 10 p.m. that evening! So thanks! Hope to run into you again sometime (assuming that you've actually seen the Militant before, that is)!