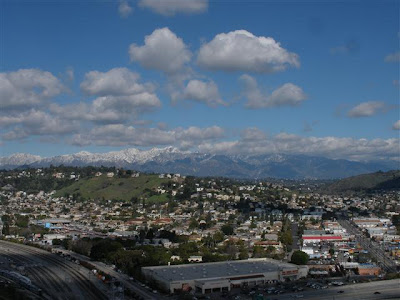 After every Winter rainstorm, and at the first sight of blue sky, it happens.

Yes, It's the sight of snow on the San Gabriel Mountains.

The past few years have seen a light to moderate dusting on the extreme tops of the local peaks, but this morning was different.

The Militant was on the 101 Freeway South headed to an unspecified location, when he saw it.

Here is a transcript:

Or something to that extent. If only he wasn't driving he would have made an exclamatory viral video that would no doubt get him an appearance on Jimmy Kimmel Live or something. But then again that would just blow his anonymous cover.

Later on, the Militant headed to Elysian Park's Point Grandview (no, not this one, or even this one), which he discovered last Thanksgiving but for some reason neglected to blog about it (this happens quite often these days...). Oh well, here it is: 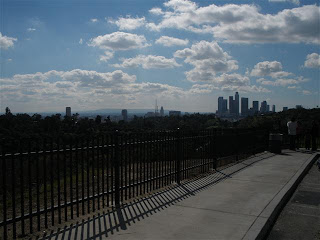 One of the highest points in Elysian Park affords you a kick-ass view of Downtown, and even far south as Catalina Island (ya rly), and to the north you get an awesome view of the San Gabriels, with NELA and the Los Angeles River right below you. It's called Point Grandview, and it's a nearly 2 1/2 mile trek from the Solano Avenue exit off the Northbound 110 Freeway. Here's a map. It's one of Los Angeles' best-kept secrets (besides the Militant's identity), although a few couples, families and individuals were found here to enjoy the view as well.

Anyways, the Militant took a few pictures of the mountains, which admittedly weren't as strikingly awesome as they looked earlier in the morning, with the sun coming from the East and the increased snowcover (it was starting to get warm and no doubt some of the white stuff had melted already).

Good news though, there's another rainstorm scheduled for next weekend. The Militant may or may not return to Point Grandview. Or he might be taking pictures at this place instead...If you see him, raise ya fist!

Some more pics of course: 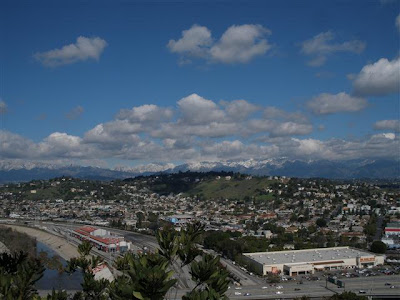 Snow-capped peaks overlooking Glassell Park and Cypress Park, with the Los Angeles River on the lower-left and the leaves of a Hollywood tree in the foreground. 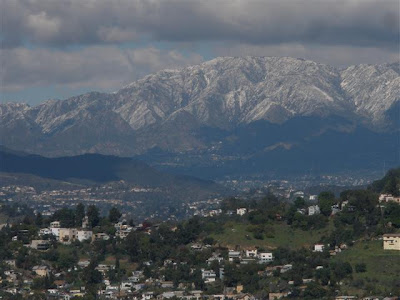 Snow covers Mt. Lukens, the tallest peak in the City of Los Angeles. 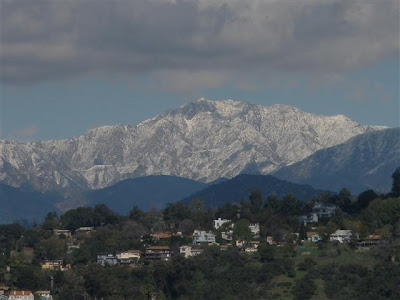 Snow-covered Hoyt Mountain (Yes, you will be quizzed on your local mountain peaks, so pay attention...), with the Angeles Crest Highway running diagonally across the middle.
Commandeered by Militant Angeleno @ 3:22 PM

The view from the foothills made running 21 miles so much more bearable. As I was driving on the 210E and then on Foothill, I was kicking myself for not bringing a camera. Also, is there any day in LA more beautiful as the sunny day after the rain?

cindylu: Not even your cellphone camera? :O Come now!