Ask The Militant: Alsace and Alla That

Whatup, readers! The Militant is proud to debut what may or may not be the first installment of a new feature of The Militant Angeleno blog called, "Ask The Militant," an interactive post where interested readers query The Militant himself on their questions about Los Angeles.

First off, The Militant thought he first did this a long time ago, but after searching the blog archives, he probably didn't after all. See, people ask him questions all the time and he keeps promising to reply to them via a blog post. Guess it never happened after all.

Anyways, no time like the present, right? This particular question was originally asked back in 2012, but it wasn't until doing research on an upcoming epic Pacific Electric project recently that this email popped back into The Militant's consciousness and he finally had a definitive answer. So without much ado, [drum roll] Tun-ta-ru-run! At long last, heere is "Ask The Militant!"

Relatively short time reader of your blog - only been following for the past [couple years] or so. I know you're interested in finding hidden/lost things in Los Angeles, and there are a few little L.A. mysteries in my area myself that I've been trying to figure out, but without much success. I thought you might enjoy trying to figure them out since you seem to be pretty good at it.

The first are mystery towns of "Alla" and "Alsace" that appear on Google Maps: 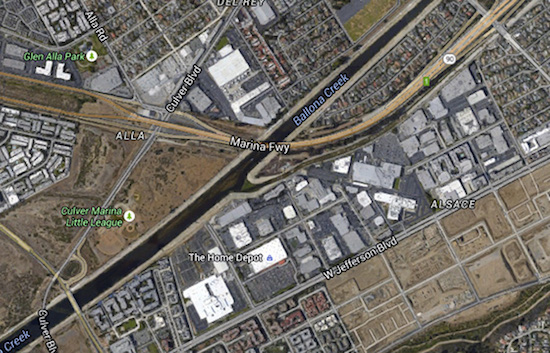 Pretty boring, but then you get into abandoned rails in LA and you start seeing these names as stations on routes. 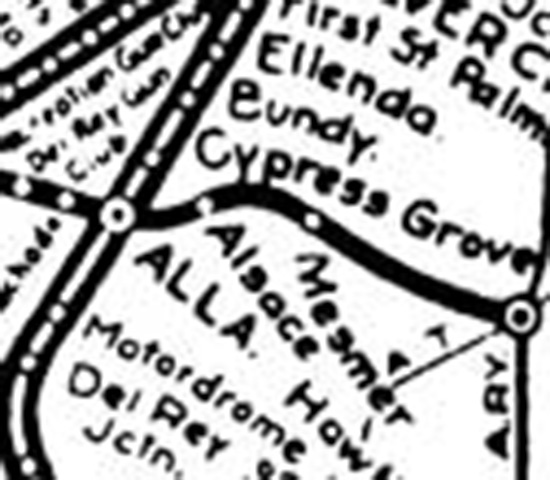 Additionally, there is a park called Glen Alla Park right in the area: http://www.laparks.org/dos/parks/facility/glenAllaPk.htm

So the questions are, were these simply just stations? Were they small towns that didn't end up making it that were annexed by LA or other cities? Who was Glen Alla and why are there things named after him? And where does the name Alasce come from?

Anyways, I hope you find this interesting enough to look into, and even more hopefully you can find out some information about it. I think it would be a great post for your blog.

Thanks for emailing The Militant. First off, he apologizes for taking so long to respond. But hey, it's new to the readers of this blog!

The reason why you find these obscure names in Google Maps is because Google initially populated the maps using multiple map data sources, including historical and old railroad survey maps. As Google Maps became more commonly used, certain places got updated due to user feedback. So for "Alla" and "Alsace," they likely used this historical data to put in names of areas, that have been unknowingly long been out of use.

Anyways, "Alla," as you may or may not have found out already, is short for "Glen Alla." The name "Glen Alla" is not of a person, but a valley in County Donegal, in north Ireland.

Back then, that part of the Westside was basically nothing but marshes and wetlands (the Marina didn't even exist until the 1950s), but if there was something, like the few scattered houses and farms, there was a need to give the surrounding vicinity a name. Naming places after where the property owner came from was popular, like Los Angeles Harbor founder Phineas Banning naming Wilmington after his Delaware hometown. Don't know who exactly named it "Glen Alla," but it most likely was an Irishman (nope, not William Mulholland; he was an Eastside vato) who owned some land out there.


The Pacific Electric Railway made an "Alla" a passenger stop and a junction, right where their Inglewood and Redondo-Del Rey lines met, approximately where Alla Road and Culver Boulevard intersect today. When the old PE right-of-way in the middle of Culver Boulevard was converted into a bicycle path in the late 1990s, the old rail property, which was sold by the Southern Pacific Railroad to the Los Angeles County Transportation Commission (now part of Metro), was referred to as the PE "Alla Branch."
Today, "Alla" is now considered part of the Los Angeles city neighborhood of Del Rey, home of Glen Alla Park and its Del Rey Certified Farmers' Market on Friday afternoons from 2 to 7 p.m.

"Alsace" is also a European location, named after a region in northeastern France. Louis Mesmer (1829-1900), an early American-era Los Angeles land pioneer was a man who came from the Alsace region of France and first worked here as a baker, later making money in real estate, most notably owning the old U. S. Hotel which once stood on 170 N. Main Street in Downtown Los Angeles (It's now the area between City Hall East and the old Parker Center), and playing a key role in the construction of the St. Vibiana Cathedral (now the Vibiana event center). He also bought land in what is now around the West Los Angeles/Culver City/Del Rey area. He was one of the people who first envisioned building a port near the Playa Del Rey/Ballona delta area, which eventually became realized as Marina Del Rey, nearly a century later.

In the 1920s, a developer had large plans for a failed project called "Mesmer City" in that area, and a street named "Mesmer Avenue" remains there, west of the 405.

The area you found as "Alsace" is directly adjacent (west) of this "Mesmer City" development. In fact, on the Pacific Electric's Inglewood Line, heading east, it was the stop after Alla and before Mesmer. So it's safe to assume "Alsace" was named by Louis Mesmer, perhaps because the broad plain surrounding Ballona Creek might have resembled the Rhine River plain of his homeland.


In 1940, 20th century tycoon Howard Hughes purchased 380 acres of the wetland area known as Alsace to build the privately-owned Hughes Airport for his Hughes Aircraft company. Famous former Long Beach resident, the Spruce Goose airplane, was built on those grounds.

Today. historic Alsace is now Playa Vista (where you live now!), the planned residential and commercial community that was developed in 2002 along the westernmost stretch of Jefferson Boulevard.

So now you know! You can now say that you're a proud resident of Alsace!

If you have a historical, cultural, current curiosity or any sort of question regarding Los Angeles people, places or things, shoot The Militant Angeleno an email at militantangeleno [at] gmail [dot] com (make sure you put "Ask The Militant" in the Subject: line) and he may or may not answer you!
Commandeered by Militant Angeleno @ 12:00 AM

What a great history. I just read the Louis Mesmer obit from 1900 in the LA Times and wanted to know more. Used to work at Belkin in Playa Vista.