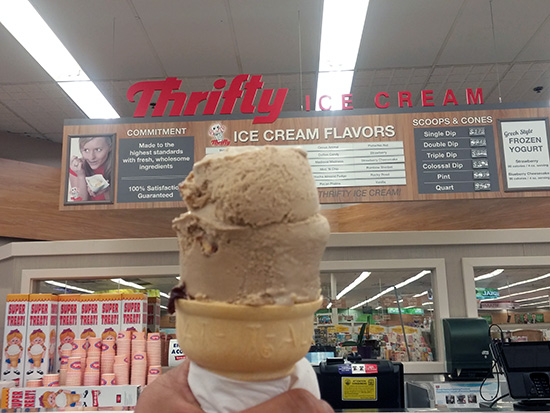 The biggest financial news headline on Tuesday was the announcement that the Chicago-based Walgreens drugstore giant will be buying its rival, Rite Aid Corporation for $17.2 billion.

Now for most people in the United States, that simply meant another corporate acquisition. But for those of us here in the West Coast, specifically Southern California, that meant the future of our beloved Thrifty Ice Cream was in question.

Now if you're too young, or too new to these here parts, here's a little 'splainin'. 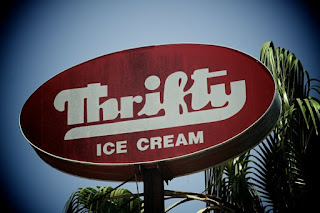 Thrifty Ice Cream is the last vestige of the Los Angeles-based Thrifty Drug and Discount Stores, which was purchased by  the Pennsylvania-based Rite Aid Corporation back in 1996. Back then, the biggest concern was also the fate of the beloved award-winning ice cream, made locally in El Monte and sold by the cone and by the pint in Thrifty counters, as well as in prepackaged form in the stores' frozen goods section.

The ice cream was -- and still is -- a part of Southern California life (as well as West Coast life, as Thrifty stores stretched to Arizona, Nevada, Idaho, Oregon and elsewhere in the Golden State), originally conceived as a way to attract more customers into its discount stores.

The Thrifty (though many a local used the possessive-but-not-correct possessive form "Thrifty's") chain was a local institution, which started in Downtown Los Angeles by the Borun Brothers in 1919, becoming Thrifty Drug and Discount Stores in 1935. The chain grew, particularly in the post-war era as suburbanization flourished throughout Southern California. The stores were initially drug stores, but they sold other types of merchandise, from clothing to toys to sporting goods. In fact, they very much resemble today's Target stores, albeit in a smaller footprint (though Target itself has recently announced some smaller-sized urban stores opening in the near future -- what comes around, goes around).  In the early '70s, Thrifty even purchased Big 5 Sporting Goods. Thrifty was the king of the world as far as drugstores were concerned. The only other drugstore playaz in town were Sav-On Drugs, Longs Drugs (both of which were assimilated into the CVS borg in 2007) and much smaller dealios like Horton & Converse (which still exist today).

The Militant grew up close to one unspecified Thrifty store. They had everything. He got Star Wars figures, board games and even his first stamp collecting kit there. They even sold bikes and baseball gloves. Before Militant Papa took the family out to fishing trips to Long Beach or the Salton Sea (before it got nasty), he not only bought his rods, line and bait there, but his fishing license as well.

Things changed in the 1990s, though, as pharmacies -- the mainstay of Thrifty stores since its inception -- were being more integrated into supermarkets and department stores. Thrifty also took a hit during the 1992 Riots as many of its stores were burned, looted or vandalized.

Ultimately, the beloved ice cream was retained by Rite Aid and turned into a subsidiary, as the new corporate ownership understood the cultural and nostalgic value of the frozen treats (though they make you pay for your double scoop of Rocky Road at the regular check-out counter).

Now there is some hope: Walgreen's purchased NYC drugstore chain Duane Reade in 2010 and the Big Apple is full of Walgreens-owned, DR-branded drugstores. Maybe, just maybe, they could possibly take things to the next level even revive the Thrifty Drug brand like dinosaur DNA encapsulated in molasses, but knowing full well how other local institutions have been treated by their own Chicago-based corporate overlords, don't hold your breath.

In the not-so-distant future, there will only be two: Walgreens and CVS (of course, many intersections already sport those two chains across the street from each other). All we're saying, oh mighty Walgreens Corporation, is this: You keep our Thrifty Ice Cream and we won't shop at CVS. It's as simple as that. Deal?

In the meantime, let's use the power of social media and shame let Walgreens know what one of the largest consumer markets in the country wants: Tweet to @walgreens #SaveThriftyIceCream (or RT The Militant's tweet), or let them know on their Facebook page!