It's A Beautiful Day For A Ballgame 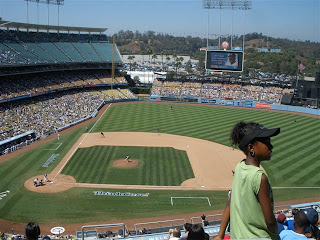 While the rest of Los Angeles was at work (or just out of town on vacation), the Militant got an opportunity to experience a weekday Dodger day game at the Stadium on Thursday by joining an unspecified group of people who had tickets to the game. Hey, being a Militant on a Militant's schedule does have its perks...

Unlike Wednesday night's loss, the Dodgers handily beat the Colorado Rockies 3-1 (The Militant's record at the Stadium is now 4 wins, 1 loss - still not bad). And although MANNY didn't knock one into the stands, he did manage to steal second in the fourth inning - his first of the year. There was a home run, though, courtesy of James Loney, who shot one into the All-You-Can-Eat pavilion.

The large crowd of kids in bright blue and green t-shirts from South Los Angeles' Camp Expo in the aisle adjacent to the Militant seemed to have a lot of fun as well, cheering for Manny, but cheering even louder for Snoop Dogg and teen heartthrob Zac Efron (yes, the Militant is so old, he had to Wiki the guy...but not so old as to not know who Snoop is!), who were also watching the game and featured on the Diamondvision screen.

Though he carpooled to the game, the Militant took the Dodgers Trolley shuttle bus after the game. The fare is free, and the social impact of the shuttle is priceless. After seeing a pair of baseball fans dressed in Minnesota Twins gear roaming around the parking lot, and who rode on the same shuttle as the Militant, the answer was revealed by a Dodger fan towards the front of the bus who explained that he and a friend rode the Amtrak train up from San Diego where they ran into the Minnesota ball fans on the same train. Turns out, they went to Los Angeles to just to watch the 12:10 p.m. Dodger game and visit the Stadium, then take the train to Anaheim to watch their boys play the Angels at the Big A. If you're gonna make a day out of nonstop baseball, might as well!
Commandeered by Militant Angeleno @ 12:54 AM