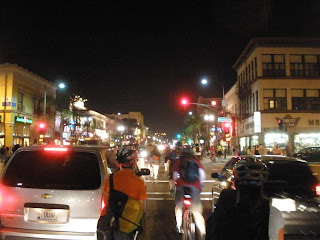 On Friday night, the Militant took to the two wheels again, and, after a quick pit stop to hang out with some operatives in Silver Lake, the Militant dashed on over through Riverside Drive in Frogtown and onto Cypress Park, where he hopped on the (M) Gold Line to Old Town Pasadena.

For when he disembarked, he already caught sight of the 200 or so cyclists, including a few of the Militant's own operatives, participating in this month's Ride-Arc nocturnal, edjumakational bicycle ride, this time through our classy little satellite of Pasadena. The pack assembled in that city's Central Park and rode down Green Street, which sort-of set the tone for the night. As this ride was organized by Sci-Arc alums, architecture is the main focus of these rides, and the work of brothers Charles and Henry Greene, who were influential in designing many Pasadena architectural icons. 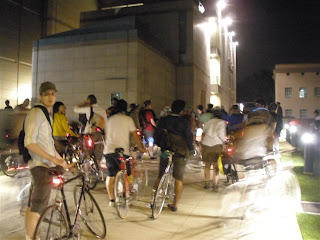 The ride passed by the Pasadena Playhouse/Paseo Colorado, the Pasadena City Hall, through Old Town Pasadena, the Norton Simon Museum, the Colorado Street Bridge, the Gamble House, the Rose Bowl, the bridge-like structure of the Art Center College of Design, the former Bullocks (now The Shops at South Lake), Cal Tech and finally Art Center's South Campus, with its rooftop garden. One of the Militant's operatives works in Pasadena, so he came along to learn more about his day job's town, though the ride didn't go anywhere close to his workplace.

Most impressive were the hidden gems that Pasadena had to offer: The dominating influence of craftsman-style architecture, biking through the Colorado Street (Street? Isn't it Blvd? Oh, it used to be street...) Bridge, riding around the Rose Bowl after dark, climbing the hill (and being serenaded by crickets and smelling the aroma of flora) up Lida St. towards Art Center, filing through the Cal Tech campus and passing through the interestingly traffic-calmed El Molino.

At one point on the route, while riding through Woodbury Rd. in Altadena, some of the cyclists spotted a man's body lying down on the road. Fearing the worst, the pack headed over. Apparently it wasn't a hit cyclist but a man who fell out of a window of a moving car, attempting to egg someone, or some cyclists. Whatever the case may be, 9-1-1 was contacted and as the group sped away, the wail of an ambulance could be heard. It was certainly a strange part of an otherwise fun night.

The ride ended far past the normal operating hours of the Gold Line (and it would have been a looong ride back to the compound), so the Militant ended up riding his bike to an unspecified part of NELA, where he sought refuge at his siblings' pad for the night.

Just when the Militant though he knew the entire area...along comes some new places to discover. It's never-ending, folks, and that's part of why the Militant will never move from his hometown.
Commandeered by Militant Angeleno @ 11:53 AM

Glad you made it out MA! It indeed was a late night. The group I rode back to L.A. with didn't get home until 3:30 a.m. (but that included a stop at Astro for patty melts and lemonade).

Small point of order: the structure across from Paseo Colorado is the Pasadena Civic Auditorium. The Pasadena Playhouse is a little further east on El Molino... but you knew that and were just testing us.

Thanks for the correction, Will! It was also cool to have or not have seen you there!

The Militant is not ashamed to admit he did not know that fact about the Playhouse/Civic Auditorium. After all, he's the Militant Angeleno, not the Militant Pasadenan!