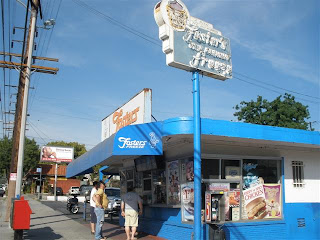 In case you didn't know it, IT'S HOT today!

Never fear, for the Militant is here!

As long as the temps stay high, the Militant will run special posts on how and where to STAY COOL! He's done something similar, like his Pulitzer-Prize Winning** series on Ethnic Iced Desserts, which are still very much valid today.

The Militant doesn't like to reveal very much about himself, but he will let you know this little fact: He was a Foster child. 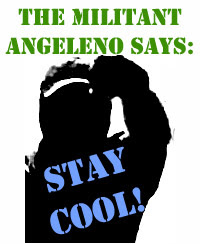 Okay, it may or may not actually have anything to do with the category of his parentage, but more to do with the type of ice cream he was most familiar with while growing up. See, down the street where the Militant grew up, there once stood a Foster's Freeze stand. It was the focal point of many childhood memories. He would pass by nearly every summer day on the way home from school (his classes were on a year-round calendar...) and buy either a regular soft-serve cone (25 cents) or the chocolate-dipped cone (35 cents). They also made pretty damn good hamburgers, too. The place had the iconic neon sign with the smiling "Little Foster" ice cream cone mascot, and was clad in blue paint, with wooden benches that had arm-desks on the side. The side of the building even had a lonely little water fountain (which always leaked on the side) that the young Militant would sip off of to or from school. The planters behind the waiting area grew sunflowers that towered high above Lil' Mil, and the entire location will forever become a focal point of memory for the Militant and his childhood Operative who grew up across the street. A recent reunion of the two yielded this conversation:

Childhood Operative: Remember the Foster's Freeze down the corner?

C.O.: Remember the day a car crashed into the side?

(The driver, coincidentally a family friend of the Childhood Operative, was okay, btw...)

Sometime in the early 1980s, the old Foster's Freeze in the unspecified neighborhood where the Militant grew up in was bulldozed, and replaced with an ubiquitous local icon of retail banality. Sigh. Paved paradise, and put up a mini-mall.

Today, while passing along Fletcher Avenue in the AWV (that's "Atwater Village," in Militant Code) he saw a familiar-looking blue building with a neon sign with the smiling ice cream mascot. The Militant felt like he was 9 again.

Mommy? Mommy? Where are you, mommy? 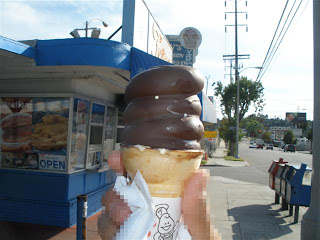 So the Militant's first reaction was to walk up to the window and ask for a medium (vanilla - ya gotta specify the flavor now), chocolate-dipped cone, just like back in the day.

Regardless, he was a happy "Lil' Mil" again, sinking his teeth into the thin chocolate shell, revealing the soft, cool, vanilla soft-serve goodness inside.

According to the company's website, there are still 101 Foster's Freeze locations still in operation across the Golden State, including the very first location on La Brea Avenue in Inglewood, still in operation since Mr. George Foster opened it in 1946. And no, those joint-venture Foster's dispensers installed inside nearly every El Pollo Loco do not count.

But still, for the Militant, and many other Angelenos who grew up within walking distance to one, a Foster's Freeze is now a rare icon of the past, unabashedly displaying its postwar-era, Route 66-ish image. When the Militant passes by one, and the temperature is right, he will stop by.

** In his dreams.
Commandeered by Militant Angeleno @ 8:32 PM

I too grew up near a Fosters Freeze. Often times, after school, I would stop for a dipped cone on my way home. I've since moved away, but I know that the Fosters Freeze in my old neighborhood is still there.

I haven't been to the AWV Fosters Freeze, but I have been to the Burbank location on Glenoaks.

Sean: You lucky fool! The Militant envies you!

Another FF location the Militant may or may not stop by often is the one on Reseda, a little north of Sherman Way, whenever he's out there on the other side of the hill.

Not to make you jealous, Militant, but Franklin Avenue HQ is close to not one (Eagle Rock) not two (Atwater Village) not three (Glendale) but FOUR (Burbank) branches of Foster's Freeze within a short drive. (Actually, the first two are a close bike ride away.) The Blogger Preschooler, in other words, has become very well-versed in Foster's soft serve.

I grew up in New York. We had Carvel. (There is one in Santa Monica, by the way.)

I like FF because they have soft chocolate ice cream, which DQ does not have.

Note that the outlets in the El Pollo Loco stores DO NOT have chocolate ice cream, and thus are evil.

Ed: When the Militant was growing up, there were a few more Carvel's here as well; he remembers those ice cream cake commercials very well.

Chocolate-flavored soft serve is a relatively recent thing at Foster's Freeze. When Lil' Mil went to his neighborhood FF, it was vanilla only, or vanilla with the chocolate dipping. He's old school like that.

We're within 2 short blocks of the Atwater branch and they do make mighty fine burgers. Though, the open air fixed taco stand a block away and the pupusa stand across the street are open later and more delicioso!