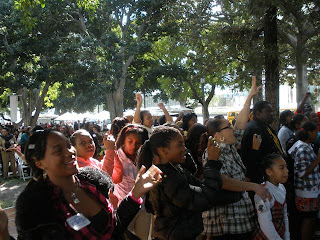 Say it loud! The Militant's black and he's proud! Okay, keeping his ethnic identity (or identities) ambiguous to his readers, he may or may not be. But he still didn't want to miss the City's African American Heritage Month celebration at City Hall on Friday.

After council got back to usual business, the attention went straight to the South Lawn of City Hall along 1st St where there was a mini-festival featuring entertainment, info booths and of course food. The host of the festivities was KABC 7's Leslie Sykes (who grew up in Compton). 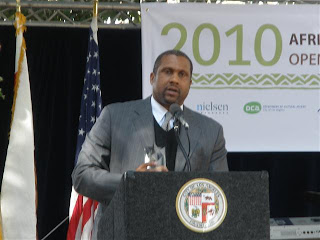 Tavis Smiley (pictured left) got up and spoke for a couple minutes, speaking about being honored earlier in the morning and mentioning that he once worked for the City as an aide to Mayor Tom Bradley (America's first African American mayor of a large city who headed Los Angeles City government from 1973 to 1993, for all you n00bz) back in the 1980s.

Incidentally, working at the Mayor's Office wasn't
Smiley's only experience with City government. He ran for Los Angeles City Council in a 1991 special election to fill the vacancy by the death of longtime 9th district councilman Gilbert Lindsay, which was ultimately won by Rita Walters (The Militant, by the way, knocked on doors in South Central Los Angeles as a campaign volunteer for an unspecified candidate in that election). 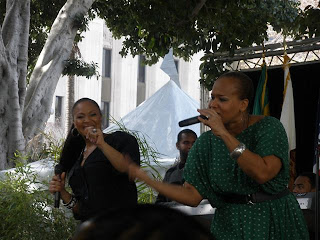 Afterward, the crowd was treated to a 5-song live set by Grammy-winning gospel duo Mary Mary, (pictured right) who rocked the crowd with their tunes, which get heavy airplay on KJLH (one of the Militant's favorite local radio stations, in fact). The two sisters (literally, they're siblings) from Inglewood even got some members of the crowd on the dancefloor in front of the stage. 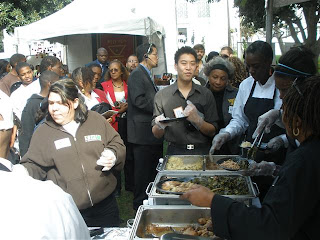 But a good portion of the crowd was on the other side of the South Lawn, queuing up for summa dat free soul food being served up for all guests. Unfortunately, the Militant had an appointment to make at that time and couldn't partake in the free lunch. But it sure smelled good.

The Militant did find out some info he'd been meaning to pass on to you readers for sometime. A group called the Our Authors Study Club, Inc., dedicated to preserving African American history and literature in Los Angeles, puts on an annual Black History Bus Tour of Los Angeles around this time of year. The Militant and one of his operatives took the bus tour a few years ago and learned a ton about the rich history of African American Los Angeles.

This year's tour is next Saturday, February 6, and the tour buses leave at 8.a.m. from the Consolidated Realty Board of Los Angeles, 3725 Don Felipe Drive (off of Stocker St.) in the Leimert Park/Baldwin Hills area. This tour is FREE and is by all means MILITANT APPROVED. Got that? The tour lasts until 4 p.m. and covers the area stretching from the Crenshaw District to Hancock Park to Downtown Los Angeles to South Central (the real South Central, that is). The tour covers houses of famous black Angelenos, community institutions and even places that don't exist anymore (the old Sugar Hill district, now obliterated by the Santa Monica Freeway). If you're into Los Angeles history like the Militant is (or aspire to be), this tour is not to be missed. For more information on the Black History Bus Tour of Los Angeles, call (310) 854-6967.
Commandeered by Militant Angeleno @ 8:57 PM

Just once visit this city.....