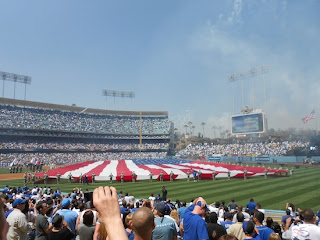 The Chinese may celebrate their New Year in February, the Persians in March, the Thais in April and the Jews in September, but The Militant celebrates his New Year at the start of baseball season, namely, Opening Day at Dodger Stadium.

Like a countdown, a parade and what may or may not be legally-sanctioned fireworks heralding the annual turn of the calendar, you can expect the same rituals every Opening Day: The red, white and blue bunting strewn across the stadium decks, the freshly-manicured turf on the field, the contrasting-yet-parallel flyovers of war and peace icons: the jet fighters and the doves, a ginormous US flag in the outfield and a lengthened lineup call of pretty much everybody on the team.

This year, Opening Day was different, though - for many reasons.

Right off, this was the 50th anniversary of Dodger Stadium, the venue the Dodger franchise has called home for the longest amount of time (All you whiny "Dem Bwooklyn yeahs was da best!/Dey needs ta move back ta Bwooklyn" types need to realize that they only called Ebbets Field home for 44 years, and roost of all, the team only won ONE title with the "B" on their caps, and FIVE with the "LA" on them.  Real Talk!) - The accent has changed: "Dwoajus" has long been replaced by "Doyers." 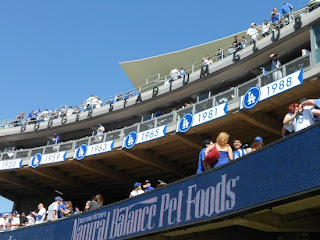 The Militant also noticed a few cosmetic changes in The Stadium: The six franchise World Series Championship signs have been replaced by new ones, only bearing the team logo at the time and the year. Also, the retired numbers hanging under the Pavilion roofs have been replaced with a simpler design.

The beloved, honorable, eminent and almighty Vin Scully was not in da hizzouse on Tuesday -- his first Opening Day absence since 1977 (A good omen perhaps, since we made it to the World Series later that year).

The ceremonial first pitch was done by Terry O'Malley Seidler, a generational surrogate for her mother Kay O'Malley, who did the honors 50 years ago. The O'Malleys are the only former Dodger owners worthy of respect and praise.

Speaking of which, also missing was new incoming (co-) owner Magic Johnson, who is in New York to attend the premiere of the Magic Bird Broadway musical (say whaaat?!)

But wanna know who ELSE was MISSING?

Yes, He Who Shall Not Be Spoken Of is on his way out, a new Dodger ownership era is on its way in, and the Stadium vibe was hopeful, upbeat and as pleasant as the 67-degree sunny Spring day that it was.
Appropriate Dodger gear now includes Lakers #32 jerseys. 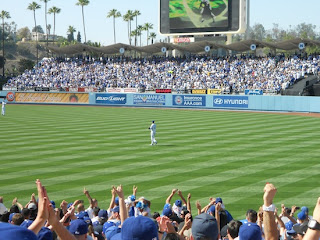 But the real play of the game went to birthday boy Andre Ethier, who hit both 30 and a solo homer into the All-You-Can-Eat Pavilion in the 8th today.  The euro-techno of Zombie Nation gave way to the sunny Angeleno rock of Randy Newman.

And all was good in Dodgertown.

Interestingly, there was the lack of at-bat music for any of the players -- either done to quell stadium violence or as a nod to the retro 1962 style which was being celebrated on this day.

Speaking of which, the specter of the Bryan Stow beating was present, with over 200 LAPD officers in attendance (their presence didn't seem that obvious...or maybe we're all used to it now). There were a few DAPA (drunk-ass punk-ass) scuffles in the stands, but nothing that involved weapons or brain damage. Maybe it's because there were no Pittsburgh Pirates fans present (No, not just in The Stadium, but anywhere on the Earth). Even the Pittsburgh transplants who live here probably think their team is too meh to bother rooting for. 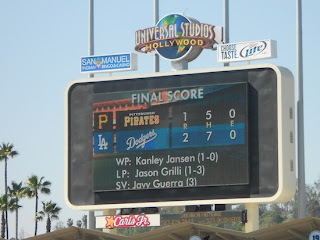 When all was said and done, The score and result was identical to last year's Opening Day: The Dodgers won the game, 2-1. Only this time, after the game, Dodger fans fought traffic and not fans of the opposing team, and they were excitedly looking forward to returning to their beloved 50-year-old palace again soon.

The Militant would like to thank Mr. Frank McCourt for not showing his ass up at the game!

Commandeered by Militant Angeleno @ 5:50 AM