Twenty years ago today, Bill Clinton was president, Richard Riordan was mayor, most of us kind of started recovering from the Northridge Earthquake, Michelle Pfeiffer's Dangerous Minds was the #1 box office hit, and TLC warned everyone to not go chasing Waterfalls.

And the Metro Green Line opened on a warm, sunny Summer Saturday.

Truth be told, The Green Line is probably the overlooked middle child of the entire Metro Rail system (which is celebrating its 25th anniversary this year, BTW...). It lacks the edginess and maturity of the Blue Line, lacks the heavy crowds and underground nature of the Red Line, and unlike the Purple, Expo and Gold lines, doesn't take people to interesting places like K-Town, the Westside or Pasadena and the Eastside, respectively.

The line was given the designated color of green to reflect the green freeway signage along the 105 Freeway, which it runs down the center of, and to represent the "green" environmental concession that created the rail line to the communities impacted by the construction of the freeway during the early 1980s to early 1990s.

The Green Line also never lived up to its planned expectations: Inspired by Vancouver, Canada's SkyTrain, it was supposed to be the first fully-automated driverless rail transit line in the United States. But the transit workers' unions cried foul, and the driverless plan was eventually dropped.

It was also supposed to serve the suburban gateway communities of southeastern Los Angeles County with the aerospace industry jobs of El Segundo...only to see the Cold War end just as the concrete was starting to get poured, which is the main reason why it's been dissed as "The line to nowhere." And we all know it was supposed to serve LAX at some point, what with the large concrete structure next to the Aviation Station veering northward (which will finally see use once the Crenshaw/LAX Line opens in 2019).

So, sympathizing with overlooked middle children everywhere (Or maybe The Militant is just saying that to hide the fact that he wasn't a middle child), The Militant is dedicating today's blog post to the Metro Green Line's grand opening 20 years ago today!

It was the first Metro Rail grand opening The Militant attended via Metro Rail; he may have driven to  an unspecified free parking spot in DTLA (it no longer exists, sorry), and taken the Red and Blue lines to the Imperial Station (now called the Willowbrook or Rosa Parks station), where the Blue and Green lines met.
There they had a dedication ceremony at the park & ride underneath the 105 Freeway with all of them dignitaries, and they had these large colored balloons strewn above the podium area.

The Militant distinctly remembers there was a small Bus Riders Union protest there and he even got into a little debate with a privileged wannabe-Marxist white guy BRU lackey who was trying to proselytize to The Militant -- a person of color of unspecified ethnicity -- that Metro Rail was somehow racist. Yes, the Green Line, which serves lily-white, wealthy communities like Lynwood, Willowbrook and South Los Angeles. Really now. At some point The Militant asked Privilege Boy a "gotcha" question and he couldn't give an answer. Ooh, moted, sucka!

Anyways, the speeches were done and we all got in the long-ass line, up the stairs to the platform to ride the train.

The trains looked exactly the same as the Japanese-made vehicles on the Blue Line. In fact, the trains made their home at the Blue Line's yard near the 405 in northern Long Beach for a couple years before the Green Line got its own yard facility a few years later.

Also, the cars were packed, mainly because for the first few years due to a lack of cars (and lack of riders), the Green Line ran single-car trains. It wasn't until sometime in early 1997 when the new, rounded Siemens P-2000 vehicles entered Green Line service and the line finally had two-car trains.

The Militant and his accompanying operatives rode their first Green Line train from the Imperial station to the "I-105/I-605" station (now just called the Norwalk station).

There, there was basically nothing, except a small fair at the Park & Ride lot where he got some free Metro Rail swag. But then it was straight back in line to the train going the other direction.

The Green Line has been criticized for not going all the way east to link with Metrolink's Norwalk station, which would have been a real awesome thing and connected commuters to places like Orange County and the Inland Empire, but all of the plans and funding for the Green Line was already in place by the time Metrolink was first conceived in 1990, and opened just two years later.

After some monotonous riding in the middle of the Century Freeway, it was time to head to the western section of the line, which The Militant was waiting all day to see. It was nice, sleek, elevated, almost monorail-like, passing over a bunch of sprawling business parks with well-manicured landscaped lawns. 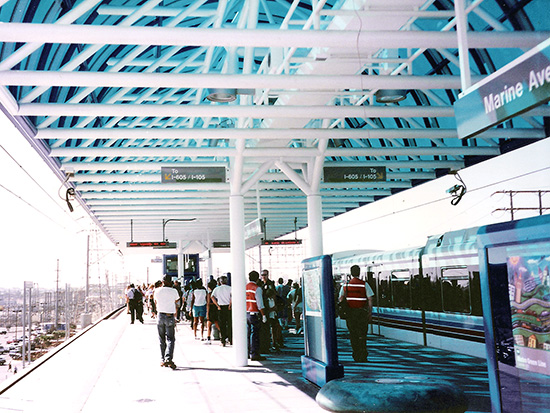 We arrived at the Marine Avenue station, now called "Marine/Redondo Beach," in the extreme northeastern reaches of Redondo Beach -- you can smell the sea, and feel the sea breeze, but you still can't see the sea (unlike in Mar Vista...). How deceptive. The Militant wanted his King Harbor freshly-boiled crab NOW!

It was time to head back to the Blue Line. There wasn't much to see here either, though there was a cool burger joint just a block or so away on Marine. And then there was the end of the line, a yellow bumping post to keep trains from falling off some 40 feet below. Twenty years later, though there's talk of extending the Green Line to the South Bay, there are currently no solidified plans to extend it in either direction.

If the Metro Rail system map is an upside-down stick figure, The Green Line represents the arms. And you can't do too much without arms, so let's give props to the Green Line on its 20th birthday today! Happy Birthday, Metro Green Line!
Commandeered by Militant Angeleno @ 4:22 PM

I really liked this blog!! Such a great news. I wish I could have been there. You know I am also going to attend an opening ceremony at LA venue and I am sure it will be a great party for me. Thanks anyways.

For what its worth, the Green Line always served the airport.
It does indeed arrive at the edge of the airfield.

The Crenshaw line is no different, other than the fact that the required transfer to the "People Mover", in lieu of the shuttle, now enjoys a dedicated right of way, and someone is going to give up more frequent service in order to "serve" the airport.