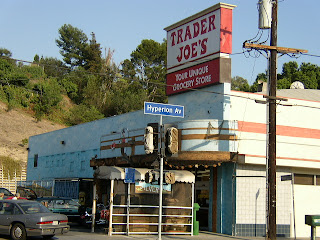 The Militant has often said that driving in Los Angeles is like watching a movie, while walking or biking in the city is like seeing a play. The Militant might have lived in the same city all his life, but he has seen the chronological changes over the years. The people of the city are the actors in the play and the streets set the scenes. Over time, these scenes have even changed their roles, or at the very least have framed different scenes using the same props.

One such street is Hyperion Avenue, straddling the line between Silver Lake and Los Feliz. Both places today are known as hipster heaven (or hell, depending on your perspective), but in the Militant's younger years, they were known as places where older folks lived (Los Feliz was jokingly known back in the '80s as "Menopauseville"). Starting at the end of Fountain Avenue and ending where Glendale Blvd. crosses the river, at 1.5 miles, Hyperion is one of those streets that didn't have to be individually named, but since someone thought up the idea, they might as well have chosen a 19th Century poem by John Keats.

Today the Militant enjoyed his two-wheeled play for today by passing the newly-installed stoplights on the jammed and risky 3-way intersection of Hyperion and Monon St. (pictured above). Though still fresh out of the box and still fragrant with that new stoplight smell, the lights were yet to be put in operation, possibly waiting a large dedication ceremony by area councilman Tom LaBonge, who would no doubt proclaim that such a day would be "A great day for Los-Anga-les." 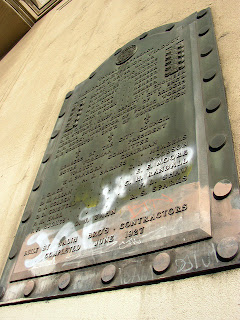 Pedaling north towards the AWV, the Militant approached the famous Hyperion Bridge, or so he once thought it was named so. The Militant recalled, in his high school years, the day the bridge was blocked off for some on-location filming shoot, only to see it a year later in this film which he saw at the Cinerama Dome. But before reaching the actual bridge, there stood a copper plaque on a retaining wall (pictured right). It lists the various politicos and city officials of the day when the bridge opened in 1927. The first three lines of the plaque read:

Of course no one speeding by at 40 miles per hour in their car could read the text on the plaque, much less know it even exists (the two-foot wide pedestrian-hostile excuse for a sidewalk that straddles the retaining wall isn't much help either). Mayor Cryer was best known (at least to the five of us who care about Los Angeles history - Mr. Howser, Ms. Rasmussen, Will Campbell, The City Nerd and yours truly) as the mayor who brought us today's City Hall. But other sources have linked him to an organized crime mob that ran gambling and prostitution rings in the Roaring '20s. Which got this Militant wondering, if Angelenos don't even recall a mayoral administration of 80 years ago, would the Los Angeles of 2087 even know that the mayor of 80 years past banged a television news reporter if they saw "MAYOR ANTONIO R. VILLARAIGOSA" on some heavily-oxidized and graffiti-tagged (the taggers of the future will use lasers (laser-tagged?) -- you heard it here first...) copper plaque? Would they even know what a "television" was? Or perhaps the people whose names are emblazoned on dedicational plaques are keenly aware of such things, and that the plaques are the only objective indicators of their legacy?

Perhaps, this Militant believes, that the common-knowledge ignorance and disregard of Los Angeles history is intentional.
Commandeered by Militant Angeleno @ 8:35 PM

I have always thought that the disregard for Los Angeles history was intentional. I am glad you brought that up. It seems to me to be a combination of factors, partly a high percentage of migrants from other places who don't know or care to learn the history, and a general trend on the part of locals to abandon their neighborhoods over the years. I think all of this is changing, finally.

Thanks, bert green. the newcomers not knowing/caring about our history is obvious, but as for the locals, most have been programmed to head for the suburbs. At the Militant's high school reunion some time ago, only 20% of the entire class moved out of Southern California, but the majority of that 80% left the neighborhood and went suburban. Why fight hard to save your neighborhood when you can be lured to a "better one"; for less money? And with most of the single-family homes in the heart of Los Angeles being income generators for the property owners as rentals, this has set up a transient culture that does not care about its neighborhoods.

I know what you mean, Militant. We live in a city where a huge percentage of people don't even realize they live in Los Angeles. Luckily, there does seem to be a core group of Angelenos obsessed with its history... and perhaps with the growing number of people downtown, that will continue to expand. Going to packed L.A. Conservancy events or witnessing the big reaction there was to the destruction of the Ambassador is at least a heartening reminder that there's definite interest out there. I have several shelves of books devoted to L.A. history that at least are a reminder that the resources are there, should Angelenos suddenly become more interested.

Yes, Ambassador. The LAUSD does not care about Los Angeles history, that is fact not just opinion. Do they even have a local history curriculum?
When this Militant was in high school, he was made to learn more about the history of Boston, MA than his own hometown. Fortunately he got Militant and learned about things like Yang-Na, the aqueduct, the Pacific Electric, Sleepy Lagoon and other things on his own. There is some deeper conspiracy set up in our systems intended to deteriorate this city.

Actually the taggers of the future will deface buildings with layers of decorative bronze memorial plaques.

The original purpose of my site (that now wanders on occasion) was to explore how a city is often reinvented by those who migrate here from the south and the east to reinvent themselves, and in turn reinvent the LA Landscape.

Those in power edit history and influence what others believe, and in turn tell others.

Gentlemen! Behold!
The future is now.

and it's open source.

Jeffro: The Militant shall revise his statement: The taggers of the future...will be 1337 haxx0rz.

Actually, the Militant envisioned a more permanent etching by means of laser beams. And if any fights broke out, they would have to use their Jedi lightsaber skillz.

As an LA native, who grew up on the Westside, moved away to the East Coast and came back, I am here to say not all natives moved to the suburbs. I settled in Hollywood and then moved to Atwater Village and, at this point, would never want to even consider living on the Westside.

The future of LA will be the areas of the city that are densely populated rich with mass transit-oriented development and populated by communities that favor public transit over private.

How right you are that some natives made their bread and butter renting the places that they lived at. Our family continues the tradition, though the aunts have sold their shares of property to live and travel on such income.

Los Angeles history dying? Well who would pay for such a legacy? At the Chinese historical they figured out to make books on biographies and garner a built-in audience with the relatives and friends. If folks are friendless or without relations, maybe a re-write of their history will be a lucrative business?