Hot on the heels of Greg Patillo, a.k.a. the beatboxing flautist, comes Angeleno hip-hop violinist Paul Dateh who gets props for pulling off some really dope chops (arco, marcato, legato, pizzacato and the dynamics bit) on da fiddle, for shizzle. He's accompanied above by DJ Inka One. Most MySpace bulletins usually consist of self-absorbed "why should I care" notices and childish chain-letter like "surveys," but a gig notice for Dateh and Inka One was posted on my bulletin today. I guess there is some value in that. The two will perform 9pm tonight at Cranes, 1611 El Centro in Hollywood. It's free, y'all. This Militant is going to spend his 4th of July practicing his cowbell skillz so I can get to be the first-ever hip-hop cowebellist. I got a fever... 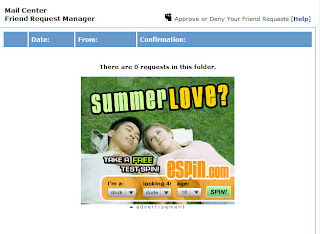 Speaking of MySpace, after performing the mundane task of deleting fake porn whore accounts (You know, the ones who send you a message going, "Hi cutie :) I like ur pic ;)" even though you have a picture of a toaster in your MySpace profile, and you go to their profile, and there's always an outgoing link that reads "Look at my pics here" and she only has one (scantily clad) picture in her profile and every one in her friends list is all guys who were suckered into the scam), an expected ad showed up on the MySpace screen and I skipped ahead to something else, but then I had to do a double-take...Was it what I thought I saw? Naw, It can't be...an online dating site ad picturing a white female...and and Asian male? No, it can't be...This Militant knows that Western society makes it a point to show that the only socially-acceptable interracial relationships are between white males and Asian females. But lo and behold, there it is (screen capture posted above). Sure it's probably two models paid to pose for an advertisement, but wow, how different...how...subversive. Even though there's a long way to go before I see equity in this heavily disproportionate ratio, this Militant is impressed. Now all this doesn't necessarily mean this Militant has a white girl fetish, but I must go on record to say that there's something so undeniably sexy about white chicks flashing gang signs.
Commandeered by Militant Angeleno @ 6:11 PM

Hi, take a look at WeShow for new videos for your blog, u can search by channels, like hiphop or funny videos..

thanks for the shout out! i really enjoy your blog. i'm subscribing to your feed now!