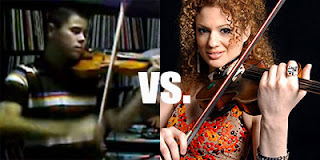 It seems as though the Militant's favorite Hip- Hop Violinist (and LAist's as well) Paul Dateh has been in a bit of legal trouble, as he's been slapped with a Cease-And-Desist Order from the lawyer of NY-based hip-hop violin player Miri Ben-Ari, who apparently has trademarked the phrase "The Hip-Hop Violinist." Ben-Ari has apparently had a bigger brush with fame, having guested on recordings with the likes of Wyclef, Alicia Keys and Kanye West. Of course, the fact that Angeleno artist Dateh is West Coast and Ben-Ari is East Coast is not lost on the Militant at all, which therein, to take a cue from how B-boys, MCs, DJs and graffiti artists determine who's got da skillz, lies the most hip-hop of all solutions to this dilemma: HIP-HOP VIOLIN BATTLE!!!

Though the Militant is obviously geographically biased - the fact that someone has trademarked the phrase "The Hip-Hop Violinist" and has hired suited attorneys to guard the usage of such a phrase - is as far from being hip hop as one can get. I mean, seriously, did DJ Kool Herc ever trademark the phrase, "The Hip-Hop DJ?" In other words, Ben-Ari be wack (Besides, her over-polished ish sounds more at home at 94.7 The Wave than something played on a pair of Technics 1200s)!

Of course, money talks in the industry game...Maybe the more street-cred Dateh can use the phrase, "Da Hip-Hop Violinist" to avoid a court appearance.

But still, a battle would still be mad dope.
Commandeered by Militant Angeleno @ 2:38 AM