Islands In The Street, That Is What They Are 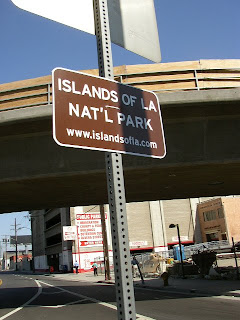 The Militant has to be very careful when writing anything Downtown-based. Why? Because but a few seconds after clicking on "Publish Post," any one of the various Downtown Los Angeles-based bloggers will be ready to pounce on you with a "Been there, done that" and a link to their post, perhaps written decades ago, covering the very same topic. But hey, the Militant is citywide, and means to stake no claim into their urban fiefdom, and his likewise citywide (even statewide, heck, nationwide) readership are there specifically to read about the Militant's take on a little slice of El Pueblo.

So enough of the needlessly lengthy intro...

The Militant, who was in DTLA late last week, took a little jaunt from Little Tokyo to Union Station and happened upon this curious brown sign (pictured above) on a traffic island at Alameda and Aliso streets, right in the shadow of the (M) Gold Line Eastside Extension aerial bridge.

The www.islandsofla.com website explains that it's all part of a DIY idea for, "revitalizing public space by turning traffic islands into territories of art...The intention is to use art as a vehicle to promote community, discussion and cultural interchange as well as explore the use and availability of public space."

Sounds kinda familiar. don't it? But hey, it's a 21st century thing. The Militant, who has roamed these environs for nearly four decades will let you know that this whole public space-public art synergy is something that's only been talked about in the past few years. Back then, "public art" was just a mural, and not anything conceptual or three-dimensional.

The project even has its own blog as well, which exists mostly for the purpose of discussing public art/space issues and add a literary bent to some of the created and proposed traffic islands in the "National Park" (wonder if the U.S. Dept. of the Interior knows anything about this...).

The Militant doesn't have to tell you what he thinks (but he will anyway). This gets the Militant's Seal of Approval. As someone who's dabbled in public art as well, the Militant looks forward to more, and perhaps seeing more of these islands citywide.

Commandeered by Militant Angeleno @ 1:12 AM