The Militant Shopped At HK...Today Was A Good Day 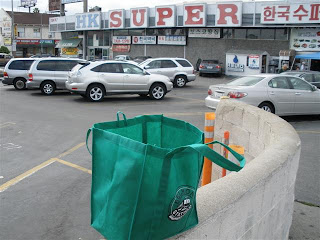 You know it's a slow blogging pre-MemDay weekend Friday when the Militant's topic is something as mundane as grocery shopping. But it doesn't matter, most of you probably won't get to read this until Tuesday, and no one seemed to be interested in the last two posts anyway, and only now has the local blogosphere started to notice a post the Militant wrote over a week ago. Bleah, you people...

...Where was the Militant? Ah yes, grocery shopping. Anyhu, the Militant decided to go pedal on down Oxford Avenue to K-Town and into one of his favorite Korean markets right at 1st and Western, HK Super Market (an acronym which, if it were located in the SGV would stand for something else, but in this case, it stands for "Han Kook" (Han-guk) which in Korean is the commonly-used nickname for the Republic of South Korea, and is probably the main reason why Korean immigrants in the late '60s decided to build their community more or less where it is today - in close proximity to Hancock Park (betcha LAist wasn't even aware of that)).

As the Militant locked up his bike, he saw a Latino grocery store employee playfully converse with a departing female Korean customer in her native language. If that doesn't exemplify Koreatown, the Militant doesn't know what does.

The Militant took along, and for the very first time, his freebie Belmont Station reusable grocery bag he got at a nearby event about a month ago and bought some strawberries and cherries (which cost way less here than in some other markets). But there was something here which the Militant totally dug - FREE SAMPLES! 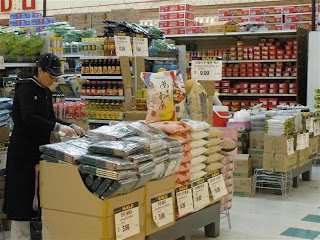 Bookending some of the aisles there were salesladies giving away free samples (pictured right) of tofu soup, udon, soba, sushi, plum juice and many other food items co-opted from Japan. Some of them insisted on speaking Korean to the Militant (which he may or may not be, in whole or in part). Of course it's a marketing ploy, a tasty, delicious marketing ploy. So the Militant bought a soba noodle "kit" and a package of laver (seasoned dried seaweed). Sold!

The Militant rode back to the compound, but the weighty bag, slung through his shoulder as he was pedaling, was a tad bit awkward, as his leg brushed against the bad on every up-pedal. The Militant sees a lucrative future for anyone who designs and markets a reusable grocery bag with backpack straps...
Commandeered by Militant Angeleno @ 5:45 PM

The Militant sees a lucrative future for anyone who designs and markets a reusable grocery bag with backpack straps... you mean, like, a backpack?

Seriously, a standard backpack may or may not crush its grocery contents due to its design. The Militant is talking about something with the physical form of a reusable grocery bag, only one that can be worn on the back for bicyclists or pedestrians.

Click this link to see another option. Just pop a rack on your bike and get one of these. Then you'll take all the weight off your back!

Thanks Anonymous (Wow, the Militant is amazed you can find all that time in between Scientology protests to read this blog!). Sounds like a good suggestion. But $99?!?!? Of course, even if the Militant can easily afford it, he may or may not actually get them for his bike since it'll make it all the more easier to spot the Militant.

"it'll make it all the more easier to spot the Militant."

Easily solved, mate. Just buy one for every MA reader. Then we'll never know which one is the real you.

Yo Militant, is nice to know dude at the supermarket just put the groceries on your bag, out here where I'm at, even after seeing I have a reusable bag with me they still start to pull out plastic and I have to tell them nah, I got it. Then they look surprised and stare at me with an attitude. BTW I started my family using reusable bags as well. And when I know I will go shopping I just ride my bike that has a basket.

Militant, you officially blew my mind away with the whole HK/ Hancock Park connection. Something I never thought of, and yet makes genius sense! BTW, Franklin Avenue fully supports the HK Market... there's a nice one close to us in tha G-Dizzy (er, Glendale). Cheap jap chae and bulgogi? Bring it on!

Thanks, Mike.
But where exactly is the HK in tha G-Dizzy? (The Militant's street cred factor just rose 300%...)

r u korean? unhipla may or may not be korean as well. if the k lady spoke korean to u, this must mean u look asian...

unhippie: The Militant's unspecified ethnic looks are deceptive and misleading, so take that as you will.

Hey Militant,
If your looking to pop your Glendale HK market cherry (sorry, couldn't resist!), it's on Pacific, just north of the 134. Meanwhile across the street, there's a Paris Baguette as well. Who needs Mid-Wilshire, tha G-Dizzy has its own little K-Town!

Mike: Ohhhhhhhhh, *that's* the market that's there. He's passed by it before, but never put two and two together. Very well then. Hey, the Militant hears they have a sale on cherries. Maybe he'll pop on by...

Dear Militant:
For the Record, carnal.
I think I coined and disseminated the "Hankook Park" tag for Larchmont back in 2005-06 to tease my Korean-born girlfriend, "The Mongol Princess."
http://la.curbed.com/archives/2006/09/pepperdiners_lo.php
Peace,
Deke Babamoto

PS My fave Korean markets in KTOWN are Hannam Chain and Assi Farm.