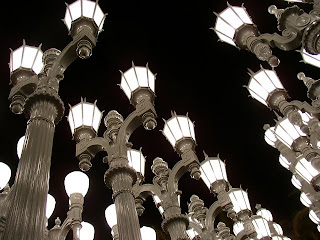 The Militant, who has been rather upset at an unspecified person in his life (or at least someone he wants in his life [WARNING: TMI ALERT! CEASE AT ONCE!]) decided to handle this situation the only way a Militant can...

Besides, he also wanted to test out his brand-new, like totally bright LED headlight, which replaced the one that got stolen recently.

So the Militant Angel-emo, pouting and pedaling, set out on the streets of Los Angeles on a 12-mile, one and a half-hour journey to collect his thoughts (and brought the Militant Cam just in case there was something along the way that would make great blog fodder).

He wanted to cheer himself up with some nonfat, non-berry-suffixed frozen yogurt, so he went off to the Miracle Mile Red Mango (lameberries bow down), making his way from the compound to the vicinity of Western Avenue, where he took his favorite new north-south route of Oxford Ave., which makes an excellent Western alternative between Hollywood and Koreatown).

Then he headed due west on the 4th Street Bicycle Boulevard Bikeway, enjoying the solace of the nearly-car-free street, the aroma of the flora, and the sight of his new illuminated toy creating a flashing oval on the road as he traveled.

He approached his yogurty destination, but alas, it was three minutes to closing time, and the froyo-istas where packing up their containers of sliced fruit, nuts and cereal. No Red Mango fro-yo fo' this mofo. Oh well, time to move on.

So the moping Militant continued west along Wilshire past La Brea, hoping for some miracle to happen along this mile, recalling the time earlier this decade when he may or may not have worked at an unspecified company in the area, now realizing that it only takes about half an hour to get there by bike and that maybe his job might have been a lot less stressful had he pedalled it to work back then. But that was a different era, and the Militant, though still unabashedly Angeleno back then, was reluctant to ride his bike outside of the coastal South Bay Bike Path, much less as a means of commuting. My, have times changed.

It was at that point the Militant finally saw the light.

Or rather a whole damn lot of them. Some 200 of them, in fact. Right in front of the newly-renovated LACMA campus, stood artist Chris Burden's landmark Urban Light (pictured above) installation (looks familiar though), so the Militant just had to take a gander. Awe-inspiring for this urbanite, who walked his bike amidst the field of cast iron soldiers standing at attention on Wilshire. As the security guard minded his own business several yards away, the Militant immersed himself in the illumi-nation, snapped a few photos and continued his journey. 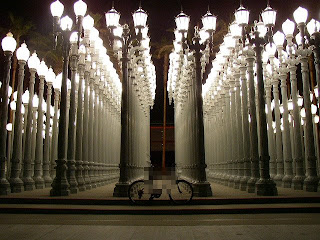 But not before taking just one more pic. Much respect and all apologies to fellow Angeleno blogcyclist extraordinaire Will Campbell, the Militant just couldn't resist getting his own version (pictured right, bicycle partially pixellated for security reasons) of this shot taken last weekend by the Will Cam (Sorry Will, the Militant just had to do it...besides, it was a fitting way to celebrate the Militant's new headlight).

Back on the road, the Militant did reflect back on his little dilemma, and sight puns aside, he did, just a few blocks later, at the ride's aphelion, decide on a course of action towards handling this situation.

Taking yet another Campbellesque cue, the Militant decided to test out the bikeability of Crescent Heights Boulevard, and that he did from Wilshire up to another bike-friendly corridor -- Willoughby Avenue, which he headed due east back to the general vicinity of the compound.

Back at the compound, the emo-ness had worn off, he had taken in some new sights and routes and felt somewhat better about himself. The fro-yo can wait another day. The physical exertion of the ride melted away summa dat stress. And most importantly, the Militant had something to write about.

So take a ride sometime. It's good for the mind, body and soul.
Commandeered by Militant Angeleno @ 1:47 AM

It's an honor to be pixel-ly emulated by the Militant!

P.S. Next time be sure to check out Crescent Heights Blvd. south of Wilshire.

P.S.S. I'll have to give Oxford a try one of these days. Good north/south corridors are the new black!

We are calling it both 4th Street Bicycle Boulevard and 4th Street Bikeway. I love those signs he made and asked to have one with the bicycle boulevard in it as well....

no need to cross out "Bicycle Boulevard"

but i guess if you are Militant, then so be it.

Ingipet: Well well well, The Militant knew you would come sniffin' round here. All he has to do is enter the words "4th Street Bike Boulevard" and you seem to magically appear :)

The Militant prefers "Bikeway," if only because it sounds less confusing and there's less syllables involved. It also has a hint of futuristicness in it. If the thoroughfare were called "4th Boulevard" then no problem. Might as well call it "4th Street Bike Boulevard Avenue Lane Road Way."

But aside from the nomenclature semantics, the Militant is 110% with you for living the dream. He also digs the fact that the signa are not green, that way they stand out instantly and motorists do not take them for granted.

i'll tell you my secret....my page has a stats feature that says where people got to the 4SBB from... :)

i like to think of those original signs as a "note" like, "hey, look at this road! great candidate!" and the evidence is the photographs.

the dream then grow when lovelier signs are made...i really like the blue 4th street bikeway signage at:

so i want to help him pass along the designs to the freshly updated toolkit....