Everybody knows the Militant loves Los Angeles, loves the Dodgers and loves the Los Angeles Dodgers. This year, although many hardcore Dodger fans lamented the team's closing of the Dodgertown training facility in Vero Beach, Fla and moving their Spring Training home to Glendale (no, not that one) Arizona, the upside was that Don Francisco McCourt has brought Dodgertown...to Los Angeles.

This year, Chavez Ravine has become "Dodgertown" itself, complete with its own zip code, and their "This Is My Town" ad campaign has spawned some billboards (both typical and atypical), as well as a way to get certain demographic groups to sell out some of the crappiest seats in the Stadium.

But after some Militant thought, "Dodgertown" has a deeper meaning: Perhaps it's been here all along.

There are hundreds of streets that crisscross this City (the fact that many of them are colored Dodger blue notwithstanding) and they can reveal some of the Dodgers themselves. Thus began the Militant's new on-going series, "The Real Dodgertown." 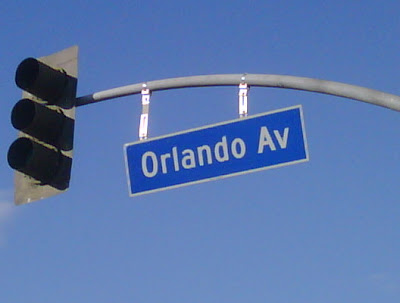 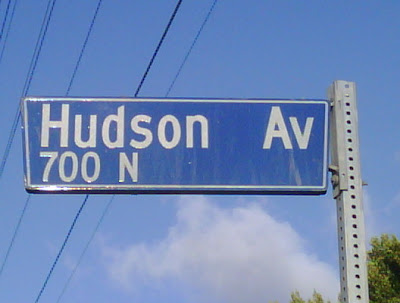 The former Arizona Diamondbacks all-star was signed by the Dodgers over the offseason, coming off an injury with something to prove. It didn't take him long, as on Opening Day this year, he became the first Los Angeles Dodger to hit for the cycle at Dodger Stadium. Aside from his on-field skills, he's been a class act off the field as well.

The Militant took both of the above pictures on a bike ride along Melrose Avenue in Hollywood, where both Orlando and Hudsdon avenues intersect. He may or may not know whether there's some connection, but if O-Dawg is ever spotted shopping at, say, Crooks & Castles or having dinner at Osteria Mozza, the Militant would love to get a pic.
Commandeered by Militant Angeleno @ 11:40 AM