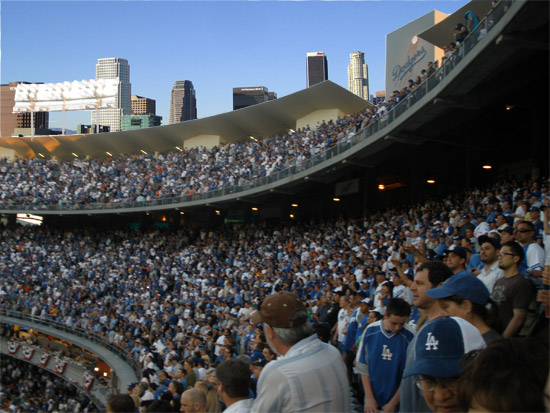 The biggest Dodger story of the week aside from Kemp, Kershaw and Ethier's All-Star appearance in the 5-1 NL win was news (or speculation) that the Dodgers may or may not move to a new stadium in Downtown Los Angeles. After Tweeting about the 30-year injustice of the Dodgers not hosting an All-Star game, The Militant joked that we'll have one -- at the proposed Farmer's Field. But in reality, that might not be that far off after all.

Whether the proposed NFL stadium will yield a fruitful Autumn harvest of a football franchise in Los Angeles remains to be seen. But the proposed site or adjacent land may very well be the Dodgers' third Los Angeles home.

Naturally and understandably, True Blue fans will balk at the idea, citing nostalgia, sentimentality and that killer view of the San Gabriels. But this warants serious discussion. We may or may not like this idea, but it may very well be an inevitability.

Dodger fans have long complained about the lack of dedicated mass transit options to The Stadium, the lack of nearby pre- and post- game hangouts, fans not showing up until the 4th inning, exponentially increasing costs of stadium parking, fans leaving after the 7th inning to beat traffic and the infamous hour-long queue out of the parking lot after the end of the game for those of us who do stay until the end of the game (i.e. The REAL Dodger fans).

And add to that Dodger Despot Frank McCourt's proposed scheme to retain ownership of The Stadium and parking lot in the event he does sell the actual franchise.

A new Downtown stadium may very well get rid of those problems forever.

There are other benefits as well: A mega-sports corridor along Figueroa from MLK to Olympic may very well be the kicker in Los Angeles being awarded a third Summer Games. The classic "L.A. is too spread out" whine of the transplant may very well lose more of its meaning. It would also strengthen the desire for non-Metro Rail served communities and areas to get linked up to the system.

The Militant will be the first to tell you that it's hard to picture The Dodgers play any place else. The same mound where Koufax fastballed was the same one Valenzuela K'ed from and is the same one that Kershaw throws today. Four of the Dodgers' five titles in Los Angeles (which, the Militant should point out, is still fivefold more than the one title the hated Frisco Giants loooove to boast about) were fought and won on Chavez Ravine's turf. The Militant can go on, and so could you.

But Los Angeles sports fans have done it before. Laker fans once thought a move from their longtime home court at The (Fabulous Great Western) Forum was inconcievable, but the past 12 seasons have shown us that Figueroa Street is just as FTW as Prairie Avenue, and aside from a couple exhibition games For Old Time's Sake, the Purple & Gold faithful have never looked back.

The Dodgers, who only have two years' seniority over the Lakers in this City, can do the same. The game, the team spirit, the history and tradition of any sports franchise is larger than any building it happens to play in.

The Brooklyn Dodgers moved five times during their first life out east. That never stopped the fans there from suporting their team, did it?  And speaking of which, the team got its name from its fans dodging trolleys near its then-home venue of Eastern Park, which was located in between two streetcar lines.

With the (M) Blue (how appropo) and Expo Lines all running along nearby Flower Street, not to mention an additional streetcar system proposed for DTLA, our Los Angeles Trolley Dodgers can finally live up to their name again (which is more than the Lakers can do, unless it's flash flood season).
Commandeered by Militant Angeleno @ 3:36 PM

Excellent piece! I too love Dodger Stadium and the memories it has given me, but it may be time to move on, and I dont think that its a bad thing. A modern stadium in DTLA would be awesome, and rather than cause a loss in attendance, would probably generate MORE attendance!

You are the Dodger guru, Militant. I never knew how the Dodgers got their name (not really a baseball fan).
This should be good for earning a free beer from some faux Dodger fan who just likes the jerseys, however!
(by the way, it's interesting that the Captcha that Blogger is giving me contains "stfu"!!)

That would be too much awesome to handle...If this goes through. I always liked Dodger Stadium's location, but a new place downtown, with a football team to boot? Not to mention light rail, and all kinds of places to walk around when a game is over.

I agree that a downtown location for a stadium would have definite advantages in terms of public transit access, but Dodger stadium is a classic, in terms of its architecture and its views, as well as its history. Again, it seems we are always too eager in L.A. to tear down our old architecture in search of some elusive "new and improved" city. MTA currently has the Dodger Stadium Express service from Union Station, which makes the stadium accessible via public transit. It could be improved with the simple addition of bus only lanes in and out of the stadium. This would make it faster and encourage more people to use it. And, it's a lot cheaper than building a new stadium.

An abandoned Dodger Stadium is too emotional an issue for me to even consider.... second only to the inevitable day when Vin won't be calling games anymore.

I shudder horribly at both thoughts.

Now that I've quit shuddering, I have more to blather:

We are by and large a city built and driven by the visions of transients and transplants. So many of us seem to have little or no vested interested in preservation or protection, be it landmarks or resources natural or man-made.

Los Angeles is composed of sedimentary layers, one on top of another's historic bones. We entombed our river in concrete. We leveled off Bunker Hill to grow a crop of skyscrapers. From the Ambassador Hotel rises a school. CC Brown's famed ice cream parlor is now a souvenir shop just like any of the dozens of others that exist on Hollywood Boulevard. We drained the Ballona wetlands for island that is Playa Vista.

Sometimes such efforts fail. Simon Rodia's Watts Towers still stands despite a drive to destroy it... but now outgoing councilwoman Janice Hahn wants to put a clatter-filled boom-boxing skatepark immediately adjacent to it. The Central Library was almost razed after arson gutted it, but it was reborn.

The mindset that seeks to dismiss Dodger Stadium for a "better" downtown venue can also be found in those who decided -- however well-intentioned -- that a network of freeways was the way of the future and a far better alternative than upgrading and expanding our aging but extensively entrenched light rail transit system.

To anyone so readily able to forsake Dodger Stadium and turn it into a memory upon whose remains will no doubt be manufactured some Rick Caruso-inspired mixed-use monument to consumo-tourism, all I can say is consider it a little more deeply and be careful for what you wish.

Dodger Stadium is within walking distance of both Union Station and the Gold Line. Build some new ramps and stairs (or escalators), improve the sidewalks and put up some good directional signage.

Chinatown's pedestrain malls would be part of the route and a great place to gather before and after the game, along with Philippe's. The walk from the Gold Line would be faster than the shuttle. Problem solved.