Love It And Levitt 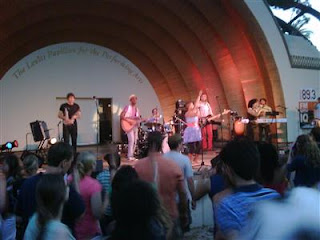 Like many Angelenos, The Militant likes to go out and enjoy a good concert once in a while. On Sunday he had a chance to do just that by hopping on the (M) Gold Line, getting off at the Memorial Park station and walking all but a few yards to the Levitt Pavilion Pasadena. What may or may not look like an ordinary bandshell in a park is actually one of our best local treasures - its annual Summer concert series.

Did The Militant mention that the concert was FREE?!
The Levitt Pavilion has been rockin' since 2002 as one of a network of Levitt Pavilions across the country, in Connecticut, Texas, Tennessee and Pennsylvania, all dedicated to bringing free quality music events to the masses. 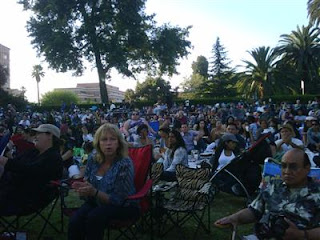 But us Angelenos are downright spoiled, since we have not just one, but two Levitt Pavilions in the area. As The Militant reported back in 2007, the bandshell at MacArthur Park joined the Levitt family and has been rockin' since then as our area's second Levitt Pavilion. Seriously, we're the only metropolitan area in the country to have two of them. And, like its older sister in Pasadena, it's also Metro Rail-accessible.
Though The Militant had been to The Levitt Pasadena before, covering that town's Make Music Pasadena event, this past Sunday evening was the first time The Militant caught one of their Summer concert shows. He saw a performance by a 7-member band called Freshlyground from Cape Town, South Africa. They got international attention last year by collaborating with pop singer Shakira on this song for the 2010 World Cup (no, there's no vuvuzela player in the band). The singer was a woman that probably stood about 4' 10" but she had a voice bigger than the nearby San Gabriel Mountains. The band played a mix of world music, pop and soul, that got everyone dancing. 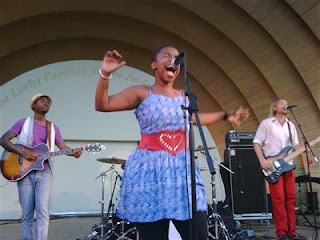 South Africa, a place that has a similar Mediterranean climate as Los Angeles, as you may or may not know, is a country that existed for years under the government-enforced racial segregation system of apartheid, which ended in the 1990s and soon elected former political prisoner (some would call him a militant in his own right) Nelson Mandela as president. So how awesome was it to see this integrated, post-apartheid band from South Africa play in front of a few thousand Southern Californians that look like the total opposite of what apartheid stood for? And for those of you who continually say Los Angeles is a "segregated" city (And you only say that because everyone in your Podunk hometown looks alike), y'all don't know shit, seriously. 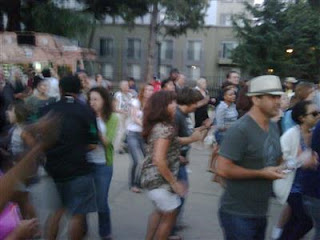 Speaking of bucking stereotypes, The Militant has always heard the transplanted ignoranti whine that "L.A. crowds are dead/jaded/etc at concerts." O RLY? The whole park was dancing around by the end of the show (pictured right). Explain that, fool! No, don't explain. Just get out of The Militant's face before he smacks you upside the head!

If you're looking for something to do during this weekend's CarmageddonChameleon, then go pack a picnic basket, leave the car at home and check out a free concert at either one of our Levitt Pavilions. Or, you can go Downtown and watch one at Grand Performances. See? Awesome free concerts...this town is full of 'em.
Commandeered by Militant Angeleno @ 11:35 PM