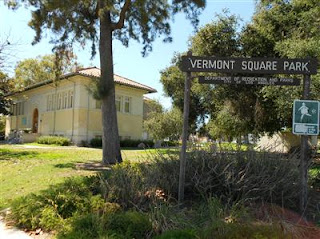 On Monday, July 18, the very day the Los Angeles Public Library restored Monday hours (thanks to Measure L) after a budget crisis-related 11-month service cut, The Militant decided to pay a visit to a branch.
He could have gone to his local branch(es), but then that would have given away too much. So he went to a significant branch library, located in South Los Angeles. He chose the Vermont Square Branch.

The first thing about this library is its location: Nestled three blocks west of its eponymous avenue and just south of Vernon Ave, this quaint green space surrounded by Budlong Avenue and 47th and 48th streets is not what many expect to see in South Los Angeles (Of course, as you may or may not know, The Militant is all into that). One of the last vestiges of a formerly ritzy neighborhood (now where has The Militant heard that before?), aside from the old early 20th-century craftsman homes in this neighborhood is this pristine green space, Vermont Square Park, populated with tall, mature trees. 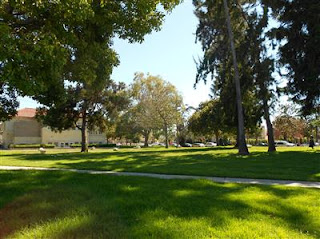 Aside from the occasional blare of car stereo hip-hop music and one person riding around the neighborhood in an overly noisy motocross bike, it was a peaceful, quiet scene, with neighborhood folks sitting on camping chairs in the grass, socializing, and teenagers walking up to the library's front entrance.

The other remarkable fact about this library is its history: Vermont Square is the oldest continuously-operating branch in the LAPL system, and the first branch library on City-owned property. Back in the day, most of the City's libraries operated out of leased facilities, including the LAPL's first outpost, the Benjamin Franklin Branch in Boyle Heights. Even the Central Library operated for 54 years before finding a permanent home on 5th and Flower. 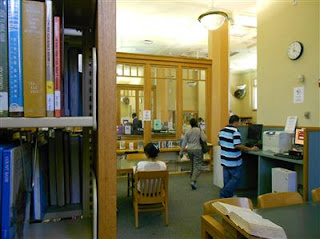 But Vermont Square's history is even more fascinating than that. It was the first of six LAPL branches funded by steel magnate Andrew Carnegie, who financed the construction of numerious libraries in not just the US, but around the world. Only two other Carnegie-built branches remain in operation today - the Cahuenga Branch in East Hollywood and the Lincoln Heights branch.

On this first Monday of service in 11 months, there were easily over 30 library patrons reading, studying or using the facility's computers. Apparently word of the long-awaited Monday reopenings traveled fast.

So here's to 6.4 million books, 1.3 million cardholders and 72 branches of the Los Angeles Public Library system on this day! Don't forget to visit your local, or any other historically significant branch, especially on a Monday!

"There is not such a cradle of democracy upon the earth as the free public library, this republic of letters, where neither rank, office nor wealth receives the slightest consideration."  -- Andrew Carnegie
Commandeered by Militant Angeleno @ 6:36 PM

Another great aspect of the library is that it (and the surrounding park) break up the rigidity of the grid. Budlong leads to the library and there's no way to miss the library, if coming from the north or south.

Without the Carnegie Libraries, we probably wouldn't have the extensive public library system anywhere we do now (or did, in some cases). Have seen them all over the country, most are not libraries anymore but still function as public places.
Too bad rich people don't give back like they used to....

What memories I have of my old neighborhood! I lived nearby on Raymond and 48th from 1967-78. I loved to come by here after school at Normandie Avenue ES and let my imagination run free through the glossy picture books of places so far away back then. But as close as my PC monitor today...

Afro-Link: Thanks for sharing your neighborhood memories! BTW, this library just celebrated its 100th anniversary on March 1st!