SGV Week: Made In The San Gabriel Valley 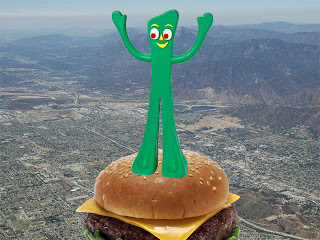 Hot and sprawling, you wouldn't think anything of any value could come from a place like the San Gabriel Valley, but think again, it's actually given birth to many people and things, some of which you'd never guess originated here.

Speaking of bites, being heavily influenced by Route 66, the postwar car culture and associated suburbanism, a number of well-known food chains were born here in the SGV. By far the most famous is Baldwin Park's In-N-Out Burger, established in 1948. Also started that year was a Temple City donut shop owned by Verne Winchell -- Winchell's Donut House. Supermarket entrepreneur Joe Coulombe started the first Trader Joe's market on Arroyo Parkway in Pasadena in 1967, and on the other side of town six years later, Chinese immigrants Andrew Cheng, his wife Peggy and his father Ming Tsai opened Panda Inn on Foothill Blvd, spawning the Panda Express chain.

But perhaps the biggest contribution the SGV gave to the food world was the cheeseburger. Yes, the food that LOLcats everywhere crave was invented in Pasadena by 16-year old cook Lionel Sternberger who worked at his father's now-defunct restaurant The Rite Spot on 1500 W. Colorado in the mid 1920s and "experimentally dropped a slab of American cheese on a sizzling hamburger."

A couple legendary toys were introduced to the world in the SGV -- in the 1950s, the then-San Gabriel-based Wham-O Manufacturing Company gave us the frisbee and the hula hoop (Though both had origins from other times and places, the plastic toy versions we know and love were 100% SGV product).

Even everyone's most beloved little green slab of clay, Gumby, is an SGV native. He was created in the early 1950s by recent USC film school grad Art Clokey and his wife Ruth in their Covina home. GUMBY!!! GUMBY, DAMNIT!!!

The SGV's biggest contribution to music is Pasadena's own Van Halen (none of its members were SGV natives, but the band itself originated here), formed in 1972 as "Mammoth" and renamed to VH two years later. The Black Eyed Peas' singer Fergie (Hacienda Heights), the late scatting '90s Euro-house singer Scatman John (El Monte) and "Toy Soldiers" singer Martika (Whittier) also all hail from the SGV.

Being full of recreation areas, the SGV also spawned a number of professional athletes -- most notably former UCLA Bruins and Dallas Cowboys quarterback Troy Aikman (West Covina), former Yankees and A's (and current Rockies) slugger Jason Giambi (West Covina) and Phillies second baseman Chase Utley (Pasadena). but the SGV-born athlete The Militant is most partial to is none other than former Dodger Nomar Garciaparra (Whittier). Oh yeah, he played on some Boston team too.

Yes, great things can and do emerge from that vast flatland surrounded by the San Gabriel Mountains, and the San Rafael, Monterey, Puente, Brea and Pomona hills. SGV, you definitely can has cheezburger.
Commandeered by Militant Angeleno @ 2:04 AM

Great post, I had no idea the SGV can lay claim to the first Cheeseburger!

Don't forget Eaton's amazing water system in the 19th century, the Brown brothers' cabin in the hills (yes, John Brown's sons), the first test of jet propulsion (at the location of what is now aptly named the Jet Propulsion Laboratory), and the first frisbee golf course.

I hate that Hacienda Heights' only contribution to this post is Fergie.

I believe the rest of the Black-Eyed-Peas are from the SGV, too!

Nobel4Lit: An unspecified number of The Miltant's operatives know the Black Eyed Peas personally, and he knows for sure that will.i.am is from The Eastside (Boyle Heights); Taboo, though SGV-raised (Rosemead), was also born in Boyle Heights while apl.de.ap was born in the Philippines but lived in the Los Feliz/Atwater Village area when he arrived here. Their "home base" is actually in Atwater Village.

mchean: The SGV has every right to claim Jackie Robinson as their own...but for the criteria per this post, Jackie was SGV-raised, but not born (Cairo, Georgia).

I seem to remember the early days of McDonalds' hamburgers along Foothill Blvd in the eastern part of the SG Valley? Long before the fabulous In N Out, there were the golden arches

Anonymous: McDonald's was born in the Inland Empire (San Bernardino). Though it was established 8 years before In-N-Out, it didn't become a franchise chain until the 1950s.

I just got a brilliant idea from your picture in this post.....there should be a huge statue of Gumby standing on a cheeseburger on top of Mt. Wilson, similar to the statue of Christ on the mountaintop in Rio De Janeiro!

I used to hear as a kid that Laura Scudder and her potato chips were from Monterey Park.
Marissa