A Destiny Fit For A King(s Fan) 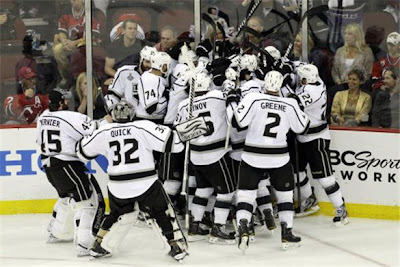 By 9 p.m. tonight, the Los Angeles Kings may or may not have won their first Stanley Cup title (and if not, it will happen within the next few days…)

This one's for you…

For 45 years (and today marks 45 years to the day the Los Angeles Kings hockey team was born, at the 1967 NHL Expansion Draft) you have proudly worn your purple and gold (or silver and black), hoping to taste that sweet glory of victory.

For the past 45 years other Los Angeles teams have basked in championship glory: The Lakers, the Dodgers, the one-time Raiders (whom the current Kings color scheme borrows from), even the Galaxy, the Sparks and the freaking Los Angeles Xtreme have won titles for their respective sports (The Clippers might soon be the only ones assed-out in this department...).

And oh for shame, you have even stood on the sidelines when your regional rival, the Anaheim Ducks, won the Stanley Cup (We need not remember that...).

Speaking of the Lakers, your team has been the forgotten, ignored little brother, and have lived in its shadow for all of those 45 years. From the Sports Arena to the (Fabulous/Great Western) Forum and now to the Staples Center, it's always been Lakers this, Lakers that. Granted many of you are Lakers fans as well, but even when you cheer at a home game and look up at the rafters, you're constantly reminded that the Lakers have 16 Championship banners, and the Kings still have none (Never forget though, for it was the Kings who donned the Purple and Gold first!)

The Militant, being a hardcore Dodger, Laker and team of his unspecified local Pac-12 University fan, will say this once and for all, with no qualms whatsoever:

Los Angeles Kings fans are the most hardcore fans of any of our local teams.


Though The Militant is by no means a bandwagon fan (For the record, he has been going to Kings games since the (post-Gretzky) late '90s, and in fact even blogged about going to one miraculous comeback game against the Dallas Stars in '07, he doesn't deserve to be considered a hardcore Kings fan either.

(Maybe until just recently) people who wear Kings gear wear it with total pride. It's quite possible for someone who rocks a Kobe 24 jersey around town to not know how many Championship rings his shirt's namesake has won, or someone wearing a blue "LA" cap to know the difference between a Kershaw and a Koufax.

Championships are great, but they do (and this is true of every team) load up The Bandwagon…which is good, since that's how fan bases grow. There's nothing wrong with jumping on a bandwagon…it's the jumping off of it that makes you suck. The loyal fan never jumps off, and never plans to.

Another advantage over other local sports fans: Los Angeles Kings Fans are the best at using transit to their games.


The Militant started noticing it in the fall of 2001, just but a few months after the Red Line was completed to The Valley. He spotted one of his operatives, in full Kings gear, sitting on the train. And he wasn't alone. There were more than a handful of them on the train, headed to Staples. And this was just a regular season game. Lakers fans?  Maybe during the playoffs you might take transit, but most of you find a way to park Downtown. As for Clippers fans...are you even around during the regular season? The Dodger Stadium Shuttle might have had high ridership, but most of that is out of spite for The Team's Former Owner Whose Name Will No Longer Be Mentioned, rather than a genuine concern to reduce traffic and pollution. The Kings fans, it's like they didn't need to be told.

This is a team of destiny. A goaltender named "Quick." A defenceman named "Martinez," who, despite being of European Spanish heritage and hailing from Michigan, is as Latino and local as you can get in the NHL for the Los Angeles fan base. And for goodness sakes, there's a guy on the team named "King."

But most of all, though this squadron might boast a Kopitar Hero and a Brown that wears the captain's crown, there seems to be a noticeable deficit of egos and an abundance of strength, heart and chemistry. This is a team.

You Los Angeles Kings Fans are hardcore. You followed the actions of ancient prophets like Vachon, Dionne, Taylor, Robataille, Gretzky. But only until now are you being led to The Promised Land.

So what if no non-athletic goods stores in town carry Kings gear? So what if the New York-based NBC network refuses to air the Stanley Cup Finals home games in the Los Angeles market (If they did, knowing, the pea(sized)cock network, they would air the games on 3-hour tape delay)?

That's not gonna discourage you. Because you're hungry, hardcore and you're getting what you've pined for for the past 45 years:

The Militant proudly and honorably raises his fist to the Los Angeles Kings Fans.

Commandeered by Militant Angeleno @ 5:46 AM

I'm curious, but I think your collegiate affiliation be best left anonymous. I wouldn't want to have to start disliking you if you chose the wrong school!

erg79: And that's one of the main reasons why The Militant is anonymous! B>

Really awesome update and i also had been searching these types of updates since past week.champion 7 T2102