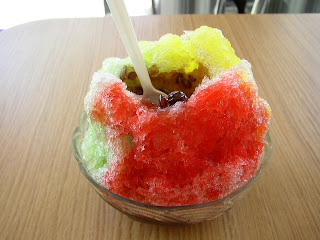 [Reader 1: Man, it looks like that Militant dude is really stretching it with the headline puns today.]

[Reader 1: What do you expect? He's a freak. He probably rode his bike to his high school prom.]

Not only is it damn hot this week, but it's...Uhhh...did you hear that? The Militant could have sworn he heard some voices in the background...oh well...it's also Nisei Week, celebrating Japanese American culture, which means we head over to Little Tokyo for some more ice dessert goodness.

This time around, it's called kakigori (pronounced like a bloody horror flick that takes place at The Gap), a shaved ice treat found all over Japan. In its most basic form, it's usually made with finely-shaved ice, flavored with sweet syrups of various flavors and colors and is most likely the progenitor of the more famously-known Hawaiian Shave Ice. Other versions, though, include sweetened milk and sweet red beans.

Such a dessert can easily be found locally in Little Tokyo's Mikawaya pastry shop nestled in Japanese Village Plaza. As anyone who calls themself an Angeleno knows, Mikawaya is the home of mochi ice cream (and don't you forget it). But Mikawaya is no one-trick pony - they also sell Japanese pastries (wagashi), gelato (which the newly-remodeled establishment was freely handing out generously-sized samples of to plaza visitors on Friday) and shaved ice treats.

But here's the thing that gets to the Militant: They don't call it "kakigori." It's called...are you ready for this..."Italian Ice."

Yes, you heard it right. This intensely both puzzles and irks the Militant...here we are in the early 21st century, an era where Nihongo-derived words like "karaoke," "anime" and "sushi" are already firmly entrenched in the contemporary American lexicon, and some people still have to hide behind the Italian thing? (On that note, the Militant also wonders why other Asian ethnicities (i.e. Korean American-owned "Italian frozen yogurt" shops, Vietnamese soups bearing "vermicelli" noodles, etc.) feel the need to use the Italian ethnicity screen as well...)

Anyway, to Mikawaya's credit, you can get your "Italian Ice" in one or more flavors, or get them in the uji (green tea) or kintoki (red bean) variety, which are listed on the menu. The Militant, seeking consistency in all that is shaved ice, sweetened milk and red bean, naturally chose the latter.

To prove what the Militant goes through just for you folks, he made not one, but two reconnaissance missions to Mikawaya - on Friday and on Monday - in search of kakigoritalianice (okay, it's mainly because he forgot the memory card in his trusty spy cam on the first visit and no online stock photo would do).

On Friday, to reward himself after a bike ride to Downtown, he sampled a towering kintoki ($4) which consisted of a layer of red bean on the bottom of the dish, then a heaping, volcano-like mountain of thinly-shaved ice on top, moderately drenched with green tea and sweetened milk, and an extra serving of red bean placed inside the "crater."

Oh man, it was good.

During the second visit on Monday, the Militant tried the "kintoki w/flavor" ($5 - pictured above) which included the typical colored kakigori syrups (he selected cherry, lime and pineapple), with the dual layers of red bean. But this time, instead of getting Mt. Fuji he got Mt. Unzen instead, and it melted...fast.

So the lesson here is: kakigori - by any other name - is good, just don't go overboard with the flavorings. The extra dollar or so doesn't limit you to any number of syrup flavors - you can choose all or even just one if you wish. Actually, the Militant much-enjoyed the more subtly-flavored kintoki with just the milk and green tea added on.

There are other places in town to try kakigori (which may or may not...no, seriously this time...) be listed as such in the menu. Fugetsu-do on 1st St. in Little Tokyo has it, as well as Sakuraya bakery in Gardena. The Militant welcomes your comments on other recommended places to find kakigori. Or whatever they want to call it.

The Militant would like to wish bon voyage, buena suerte and mabuhay to operative and fellow militia member Valleypinoy as he embarks today on his 4-year advanced militant training tour of duty in the Pacific Northwest. STAY MILITANT!
Commandeered by Militant Angeleno @ 1:23 AM

Mochi ice cream... nectar of the gods. And super cheap, too!

kakigori is categorically out-there. Thanks for letting us know.

It's a great dessert, I'll buy one. I think you are doing a great job, posting this atypical snow-cons. By the way, since when you're doing this? because this is my first comment and I think this blog can't be better.

Thanks for sharing in detail.

This is fantastic blog because I have learned too much from here. Seriously this type of guide is definitely super it definitely helped me.
Commercial snow cone machine