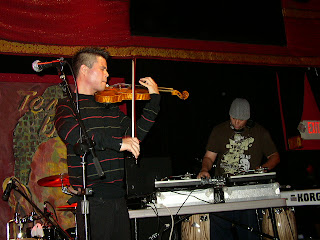 On a hot summer's day where most Angelenos were focused on either the too-big-for-its-britches Sunset Junction Festival, the Los Angeles Tofu Festival or Nisei Week festivities, the Militant had a million things to do all over town on Saturday. The day concluded with a visit to Santa Monica's Temple Bar, where the Militant and one of his trusty musically-inclined Militia members checked out everyone's favorite "violin player of the hip-hop music genre," Paul Dateh. The Militant, without any monetary compensation (yo, that would be sooo un-militant anyway), has extolled the virtues of this Angeleno musician from the Westside on this here blog, so it was time to see if he's the real deal.

Dateh played to a well-packed house (a diverse crowd which seemed equally represented by close friends and new Internet fans), backed by a 4-piece band called The Live Movement, singing some tunes in the soul/funk music vein, and dropped in a set with his YouTube partner- in-crime, DJ inka one. The two pretty much performed a live version of their famous YouTube video, which now boasts over a hundred thousand views, and Dateh even mentioned that he will be featured this coming Tuesday night on ABC's "iCaught" Internet culture-focused television show. He even performed a few inka one-backed songs on sung vocals. He finished off his live set with a spirited cover of Jill Scott's "It's Love" and a latin-flavored tune to close (Dateh joked about the irony of a Japanese American like himself teaching the crowd to chant the song's Spanish-language chorus).

The Militant may or may not have chatted with Dateh after his show to give him props (Sorry Paul, that's just S.O.P. - hope you understand).

But yes, dude was the real deal. Check him out sometime before he blows up.
Commandeered by Militant Angeleno @ 2:36 AM

i may or may not had a great time meeting you! :)

thanks again for coming.