A Trip Down 3rd (World) Street 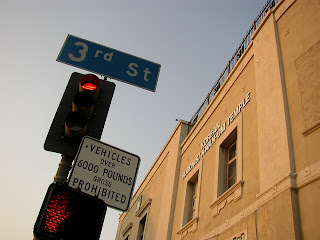 During one of the Militant's many bike rides within the 5-mile radius of his compound, he often favors certain streets over others, for no other reason than their accessibility or their familiarity -- Vermont or Western always; Hollywood, Sunset, Santa Monica, Melrose, Beverly, 6th or Wilshire very often (topography does play a huge role when biking; the Militant tries to avoid the steep hill on Normandie Avenue between Melrose and Beverly). But on a spur-of-the-moment decision while biking down Vermont between errands on Wednesday evening, he decided to veer right on 3rd Street.
Right away, it hit him: the roughness of the road (the asphalt was removed for re-paving soon), the faint smell of smoke, the stronger scent of food and other spices, the sight of throngs of people walking on a relatively narrow sidewalk, with street vendors selling everything from sliced fruits to sunglasses, took him back to [the largest city of his parents' unspecified home country]. But this was different. It was officially Koreatown, but not exactly Koreatown.

Now, unlike most hoity-toity know-it-all writers, the Militant does not mean this in the pejorative sense. The sights that the Militant saw were not of shame, disgust or disdain, he saw a multi-cultural community not fearing the urban landscape, but embracing it. 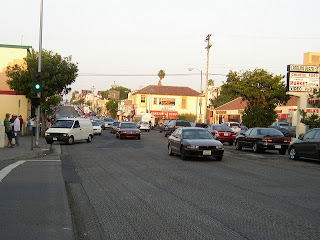 A young Latino boy in a taekwondo uniform crossed a sidestreet with his mother and younger sister, while a Bangladeshi couple entered a market to grab a little taste of home (apparently the presence of a Bangladeshi community here is something the Militant discovered only recently). Around here, a minimall might sport businesses from, at the very least, four different ethnic groups. In addition, traces of the Thai, Filipino, Vietnamese and Pacific Islander
communities spill over into this thick ethnic soup of a community. This is the type of neighborhood where the "privileged class" is not white Americans, but yet another immigrant group -- Koreans, far more established and business-savvy, owing their presence largely to taking advantage of the B1 Visa where others don't. This is the type of neighborhood where the most common product sold in the stores are phone cards, which, for $5 or $10, anyone can call a local or toll-free number printed on the card, enter a PIN code revealed after scratching off the silver bar and talk to their abuela, their bhai or their tatay (That's grandma, cousin or father in Spanish, Bengali and Tagalog, respectively) for minutes to hours on end, on the other side of the world, usually at odd hours of the night.

Now, people from more, um, privileged areas usually scoff and accuse these people of being "insular," "unwelcoming" or "keeping to themselves." But this is where their American dream begins. Whether they speak English or not, their children definitely will, if they don't already, and will likely grow up torn between a world of two cultures, finding their identity. Enclaves, whether designated or not, exist so they can give each other a boost, some support (be it emotional or financial) or just make friends. How many immigrants actually end up homeless in our streets? Very few, if any. East Coast transplants migrate "out west" and whine and complain why the pizza is no good or why the leaves don't all turn orange in the Fall, but imagine the culture shock of the foreign immigrant -- which is that of the transplant magnified a hundredfold -- yet they are too grateful and self-respecting to whine. In fact, whining is not even an option. Their only option is to work, to survive.

And surviving is what they do here in the dense sidestreets of 3rd Street.

The experience isn't unique to this street, it's replicated in places like Pico-Union, North Hollywood, East Hollywood, Panorama City and Westlake, to name a few.

In East Hollywood's Thai Town, the same scene is played over, this time with the cast of characters speaking Thai, Spanish and Armenian, the street a little bit cleaner and the neighborhood, though still densely populated, not as dense as the corridor two miles due south. Of course, it helps when the street is arguably the most famous street in the world. The Times did an article on Thai Town on Thursday, and while it depicted the same characteristics of a low-income, multicultural immigrant population, its restaurants are renowned, its ethnic identity is becoming a permanent part of the cityscape and community organizations are striving to empower and educate its residents on how to run a successful business, and facilitating a public market there.

Back down in 3rd (World) Street, perhaps the roughness of the pre-paved road is the perfect metaphor -- it's rough now, but the best is yet to come. Though others may pass, with fear or without regard, the Militant will ride through 3rd Street again, quietly wishing its residents the best of luck and prosperity, and uncover even more untold stories. Perhaps you might even give it a try yourself.
Commandeered by Militant Angeleno @ 2:02 AM

i was curious about the bangladeshi community in ktown and asked my boss about it. she's a desi american, involved with the south asian network. the bangladeshi in ktown came about like how many immigrant communities in los angeles. one relative moved out to los angeles, told their cousin/brother/sister mother and then folks started to come to the area. most of these folks are undocumented immigrants who fall below or at the poverty line.

Great post. I passed through 3rd street last evening on my way to a family dinner on the West Side, and I had a similar experience to yours. Awe mixed with a great sense of the future. Keep up the good work.

I have worked in downtown Los Angeles for thirty-five years, and I’m amazed at the transformation taking place the past few years.

To Ampersand pecent semicolon equals lainey: How does one pronounce your username, anyway? Oh well, what you described sounds just like the story of every immigrant community here. The Militant is wondering though if there was more of a practical reason - perhaps the predominantly-Muslim Bangladeshi community wanted to be in close proximity to the Islamic Center of Southern California on Vermont?

i actually just say lainey. i forgot the reason for the &%;. i think the mosque in the area plays a part in the community as well. most of the bangladeshi in the area are low income. so having things like halal markets, restaurants, and a mosque within the area of a community makes sense.

Thanks, lainey. Actually last week, the Militant sampled one of the Bangladeshi spots in the area - not so much a restaurant but a market with food under heat lamps and an eating area. The Militant's foodie side did not like it, but the Militant is still open minded enough that the problem was definitely attributed to the place and not the cuisine (the Militant loves Indian food, though). If you've tried any good Bangla food in the area, please let the Militant know!

Nice post. The true diversity of LA astounds and is a wonderful thing to behold.

Hey Militant, great blog!I know how protecting your identity is important to you so I thought this story might be of interest to you...here's what happened to NBC Producer Michelle Madigan when she unscrupulously tried invade DEFCON 15 in search of a sensational hacker story.

Yes the Islamic Center is a focal point for the Islamic populations around Vermont and Third. However you have an Indian/Hindu population that is more widespread that defies being centered in any particular spot/location.

However there seems to be more Presbyterian Koreans than Baptist Koreans while the reverse is true in LA for more Chinese Baptists than Chinese Presbyterians. Since there seems to be no Asian sect that forgoes using a car or requiring any dietary restriction (well 7th day adventist sortof) Logically there shouldn't be any asian enclaves but there are like the Thais.

For a while I noticed one Vietnamese enclave near one apartment near the SM Freeway. The most famous profession for vietnamese is the nail salons.

I wonder if there are any Cambodian/Laos donut shops in your neck of the woods?

Well enclaves are concentrated and more crucial when the community is new. After some time, the community gets more disperse, and either forms "micro-enclave" clusters around the region i.e. Filipinos in West Covina/Cerritos/Carson/Panorama City or Koreans in Koreatown/Garden Grove, etc. Most of the Asian groups already here have been here for over 30 years. Thai Town is one cluster, yet there are other clusters in North Hollywood (due to the Wat Thai temple) and even Long Beach-Orange County area (Tiger Woods' mother belonged to that cluster). Bangladeshis are relatively new compared to other immigrant groups. The new ones to look out for in terms of where they are these days are the immigrant African groups and Iraqis.

Yes there are Cambodian-owned donut shops near The Militant's compound, one such, open 24 hours, is the best places to buy prepaid international phone cards.

(Wow, that was a long response, it could have been its own blog entry...)