The Quantum of Solis*: An Angelena Joins Obama's Cabinet 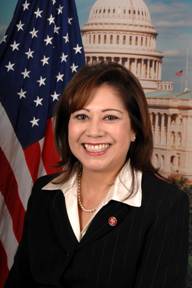 Okay, so the Militant may or may not have been selected as the new LAUSD Superintendent (damnit!), but the Militant is pleased to find out today that The Funky President has selected a native Angelena to head the U.S. Department of Labor. Congresswoman Hilda L. Solis, who represents California's 32nd congressional district, which stretches from The Real Eastside and through the San Gabriel Valley to Covina, was chosen by Obama on Thursday to join the 44th President's cabinet. Cool deal, since the Militant was concerned that Obama was being a little too Chicago/Illinois-centric in his picks.

Solis is the first person from the Southland to be on board the new administration, especially since her colleague (and the Militant's own congressman) Xavier Becerra opted to stay in da House rather than take on the U.S. Trade Representative position. Though she's a native Angelena, she's not the first So Cal native on Obama's cabinet -- Commerce Secretary-designate and New Mexico governor Bill Richardson was born in Pasadena. And for anyone keeping score, Obama's got three Latinos and two Asian Americans in his cabinet...tokens no more!

So congrats, anyway, Congresswoman Solis! We got an Eastsider (What? And these fine folks haven't taken notice of it yet? Tsk tsk...) in the executive branch!

* The headline alone was the main reason for writing this post, and the Militant is surprised no one's jumped on that headline yet.
Commandeered by Militant Angeleno @ 8:51 PM

That said, congrats to Congresswoman Solia. Good for her, good for workers, good for the people of L.A.

Some of us don't care much for electoral politics, even if it comes to Eastsiders or Latinos. That's my excuse anyways.