WHATUP?! It's been a while. Belated Merry Christmas, Happy Chanukkah, Joyous Kwanzaa and Awesome Boxing day to all of you.

The Militant's 2008 went off to a slow start - you can say a semi-hibernated state, but then he discovered some new-ish places in Downtown Los Angeles, and even stepped into the Orange Curtain. He also joined Facebook, where he set up his own account (add him as a friend, he won't decline!). He also covered the MLK Day Parade near the Crenshaw District. But instead it was his K-9 unit that went free at last, only to be found safely days later in West Los Angeles, several miles from the compound. Speaking of animals, the Militant helped usher in The Year of the Rat in Chinatown in early February.

In March, armed with a video camera, he rode some Red Cars at the Orange Empire Railway Museum out in Perris and did his very first Vlog entry, where readers heard what may or may not have been the Militant's speaking voice. RE-RUN!:

Speaking of trolleys, he joined a Ride-Arc ride where the cyclists re-traced some of the old transit lines. Speaking of Ride-Arc, what happened to it? He did go on rides through Pasadena, and a solo ride from the compound to Venice Beach. He even explored the other bike culture.

The Militant loves his City's neighborhoods, so he brought you to The 'Shaw, Little Armenia, Historic Filipinotown, Hollywood's Guitar Row and the potential Little Bangladesh. He even featured the City's Hair District. 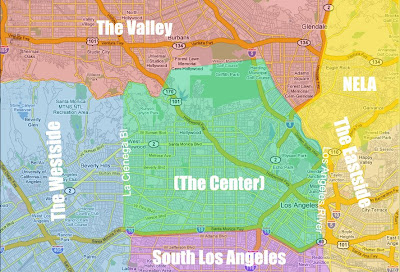 One of the biggest hot-button issues here in Los Angeles Blogdom is the whole Eastside/Westside delineation thingamabob that no one can get enough of, wether they be the correct locals or the incorrect transplant gentrificados. The Militant finally put his foot down on the issue and defined it once and for all, which came in the form of not a line but an entire central region of the City dividing west and east...But what ever should it be called?

There was no shortage of festive street activities to be found: Cherry Blossom in Little Tokyo, Earth Day in Mid-Wilshire, Historic Filipinotown's anniversary, Echo Park's Lotus Festival and the ginormous Songkran in Thai Town. He also didn't go to Sumshit Dysfunction Sunset Junction. Farmer's Markets in Highland Park and South Pasadena also were neato destinations for this Militant.

Hey, what's that? The crack of the bat? The scent of Dodger Dogs? It's time for Dodger Baseball! And boy was it a time in 2008, with the team celebrating its 50th anniversary with a return to the Los Angeles Memorial Coliseum (the largest baseball game evar in attendance, an event so big, the Militant just had to vlog it!) and a memorable Opening Day.

Now that the Dodgers have been a Los Angeles institution for half a century, the Militant figured it was time to use their new bicycle parking facilities. But alas, it was really just the Top Deck's smoking section. Heck, even the Coliseum had better bike parking. But whether he rode to The Stadium on bike, by car or via the new Dodger Trolley(bus), The Militant thought it was a great season. A season of young Clayton Kershaw, and of course, MANNY. A season in which the Boys in Blue won the NL West, and celebrated. They even swept the Cubbies to win their first postseason series since you-know-when. Alas, their NLCS rival had soon their Phil of victory. But hey, at least we can still look forward to the Next 50 years...

In 2008, the Militant celebrated his fi(r)st anniversary as a bloggerista, with a Month of Militancy in the month of May (or may not), and revealing himself to the world (kinda sorta) for the very first time via a vlog entry. And what would a Militant be without dispelling some very popular myths directed at Los Angeles?

The Militant was most proud of his posts connecting the past with the present, especially in 2008, after lots of Militant research, he finally uncovered some of our lost creeks: Sacatela Creek (Los Feliz to Koreatown) and Arroyo de los Jardines (Hollywood to Mid-City). He also loved walking up and down the Franklin Hills Public Stairways.

And who could forget that 5.4 seismic rump shaker that shook on July 29?

Finally, the Militant ended 2008 with a car-less weekend getaway to San Diego, and a failed bid to be appointed as the next LAUSD Superintendent. Better luck next time!

So what does 2009 hold? There's lots in store for this fine City. There's an election coming up, a new Metro Rail extension going to The Eastside, and depending on how things go, there may or may not be celebratory parades for our more prominent basketball and baseball teams. Until then, Happy 2009 to you and STAY MILITANT!
Commandeered by Militant Angeleno @ 4:38 PM

I recently wrote about a Spring that flows from Griffith park (no not Ferndale).

I also took pictures of the river near Highland and Wilshire. They have really disguised its existence.