The Militant, For One, Welcomes Our New MLB Overlords

On Wednesday afternoon, the Los Angeles sports world was rocked by a virtual earthquake when Major League Baseball commish Bud Selig finally grew half of a walk and announced that the MLB be bum rushin' the Dodger organization after he had had enough of team despot Frank McCourt's recent scheme to borrow $30 million from Fox to supposedly pay off the team payroll (riiiight...). The Commish will henceforth appoint a trustee to run the day-to-day operations of the club.

Where were you when you heard the news?

The Militant was conducting some Militant research at an unspecified location in Downtown Los Angeles when an Operative mentioned the news in a text message. A loud, "WUUUUUUUUUUUUUUT?!?!" was uttered by The Militant, startling those in the room. A quick check of Twitter confirmed the report. Like whoah. WHOAH.

Although the players claim "What happens in the front office, stays in the front office" and give political responses saying they are unfazed by the organization's soap opera/Greek tragedy, some eight hours after the news broke, the following things happened: 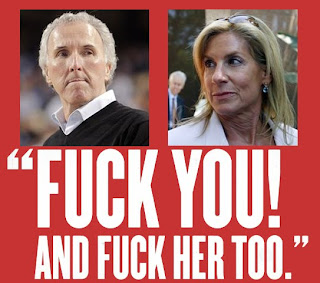 But before we dance for joy and sing, "Ding Dong The Witch Is Dead," the Moammar Gadhafi of professional sports remains defiant. But on top of all this, the Internal Revenue Service is also launching their investigation of Frank and his babymama Jamie over $145 taken from the team and unpaid taxes (Whoever thought we'd see the day when we laud Bud Selig and the I.R.S. as heroes?)

Like McCourt's Egyptian counterpart Hosni Mubarak, defiance is but a futile reaction. It's now a matter of "When," rather than "If" they'll finally get to Deport McCourt.

As to who would be Selig's appointed trustee, the Militant wouldn't be surprised if the following names pop up: MLB Executive VP of Baseball Operations Joe Torre, Angeleno and former MLB commish Peter Ueberroth (who, like, ran the most successful Olympic games in history right here in 1984, baby) or former Dodgers owner Peter O'Malley, who not only volunteered to run the team in the interim in the event of a sale, but is probably interested in doing some Lenten penance after handing the keys over to an unspecified Australian-owned broadcast television network back in '97.

In the meantime, time will tell whether attendance will recover from sub-30k levels and fans will return to The Ravine (there's still that whole issue of Police at The Stadium, and The Militant ain't talking about no concert in 2007...). But if you do go to the half-off throwback midday game today, please start a "BUD SE-LIG!" stadium chant for The Militant, will ya?

Yes, these are still uncertain times; The Dodger fan blood bleeds an unusual shade of blue these days. But fear not, The Militant sees better days ahead. Simply heed the enthusiastic miming of our 8th inning lip-sync star Jameson Moss: Don't Stop Believin'.

CAPTION FUN TIME!
Write or Photoshop your captions to this lively exchange between
The Despot and The Commish: 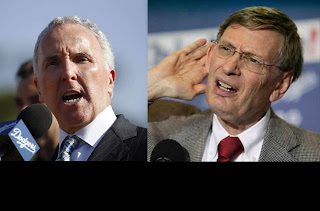 Commandeered by Militant Angeleno @ 3:40 AM