What Comes Around, Goes Around Fifty years ago today, in the wee early morning, a pair of interurban streetcars departed from the Pacific Electric terminal on Main Street, headed out through the wooden rail viaduct, and then down the quadruple-track right-of-way towards Long Beach, where, less than an hour later, it entered history as the last run of the Red Cars in Southern California.

For years, many an Angeleno claimed to be riding "on the very last Red Car" into history. That may or may not be so, but they did take the time to pay their last respects to a 60-year-old institution in the region.

Flash-forward just about half a century to the day later: 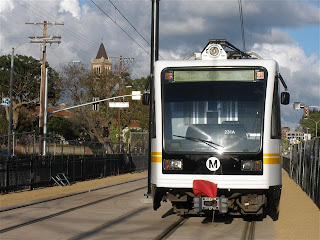 Metro Rail LRV #231 sits on the Expo Line tracks after a day of testing -- the first test run under its own power.

If it were not for the return of rail transit some 21 years ago, April 9, 1961 might remain an absolutely dark day in Los Angeles history, but now it's just a trivial footnote - not the end, but merely the beginning of a 29-year hiatus.

Sure, the Pacific Electric, at 1,150 miles (and larger than the 842-mile NYC subway -- tell a New Yorker that fact and they will start convulsing) was the charming ancestor that Metro Rail will always pale in comparison to, but any planned modernization to it would have been prohibitively expensive anyway. History is cyclical - The Militant's youth took place in an era where rail transit in Los Angeles was either a distant memory or silly pipedream - a reality where some people would have gladly exchanged their "what ifs" and "too bad we don't haves" for today's worries about cost overruns and why the turnstiles don't yet work.

It's a well-known fact that The Militant loves him some history. But he's far more excited about the future. Look back, only to see how far we've gone.
Commandeered by Militant Angeleno @ 12:08 AM

Best of Militant Angeleno! Great post, and so true.

Reading a lot about Los Angeles in the 30's and 40's, I was always struck by how many people would talk about taking the Red Cars..it seemed to be pretty easy to get all the way to Long Beach and other places on the outskirts of town. Easier than it is today!
Score another coup for the Militant! viva la rail!