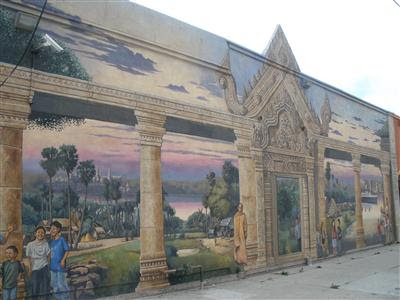 Like Los Angeles, Long Beach is a pretty diverse community itself. After all, its motto is "The International City."

Long Beach is home of the largest Cambodian population in the United States, many of whom came here in the late 1970s as refugees escaping the genocide brought on by the tyrannical rule of the Khmer Rouge party. Nearly four years ago, on July 3, 2007, the Long Beach City Council officially designated a one-mile stretch of Anaheim Street between Atlantic and Junipero avenues as "Cambodia Town." 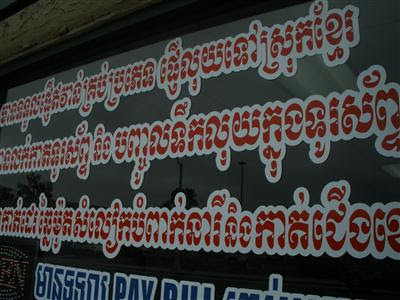 Unlike the designated ethnic communities in Los Angeles, there is no sign welcoming one to "Cambodia Town," but the sight of Khmer script (pictured right), murals (pictured above) and the presence of markets, restaurants, mechanic shops, jewelry stores, money remittance offices and video stores (many of them referencing places in Cambodia) were abundant.

After The Militant got off his Blue Line train at Anaheim Station, it was a simple matter of walking eastward on that street to explore. 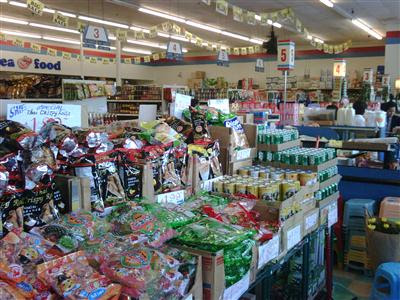 Though it was a Cambodian market and most of the clientele were Khmer-speaking, the products were pan-Asian in nature: Items were imported from Thailand, Vietnam, the Philippines, Taiwan, China, Japan and other countries, though hardly any from Cambodia.

But the Cambodian community doesn't exist in a vacuum. Long Beach is home to people from those above ethnicities after all, and likewise the country of Cambodia itself is influenced by its Asian neighbors.

In many ways, Cambodia Town is similar to its cousin 25 miles to the north, Los Angeles' Thai Town: Both encompass a single commercial street, both feature large, successful New Year festivals in April. Of course, Thais and Cambodians share many similarities -- similar basic customs, a related language/alphabet and Theravada Buddhism.

The food is similar. In fact, most Cambodia Town restaurants advertise themselves as "Thai-Cambodian Cuisine." Generally speaking, Cambodian food is the slightly-less spicy relative of Thai cuisine.

Speaking of which, all this walking has gotten The Militant kinda hungry...

The Militant found his food stop after a mile of walking: Siem Reap Restaurant, on Anaheim at Rose Ave. It had gotten a great reputation on Yelp, so The Militant figures it wouldn't be a bad choice at all. 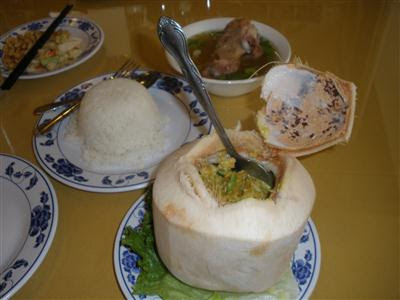 The restaurant (named after the Cambodian city and province where the famous Angkor Wat ruins are located) was spacious and not very busy on this Thursday afternoon. A video screen playing a DVD of live Cambodian music and comedy performances was playing in the background. The Militant went on to order the amok trey, a seasoned fish and vegetable stew cooked inside a coconut, and a jackfruit shake. After telling the waitress it was his first time sampling Cambodian cuisine, he was also hooked up with a free pork and chicken soup and a small sample of sach ko angh - a beef skewer with papaya salad. It was all real good, and The Militant hopes to come back here again with some of his operatives! 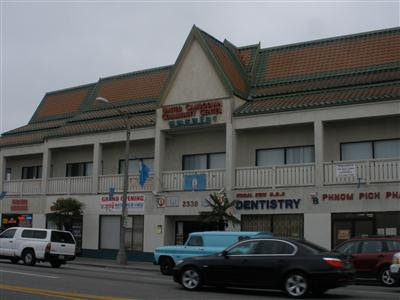 Determined to walk the entire span of Cambodia Town (not to mention to walk off his lunch), he continued farther down Anaheim until Junipero Avenue, the easternmost end of the community. There stood the United Cambodian Community center (pictured left), a large building designed after traditional Khmer architecture.

On the windows of many of the businesses were many of the same posters promoting community events, like concerts, dance parties, fundraisers and even movie premieres, such as one that happened this week for the film, Rice Field Of Dreams, a documentary on the first Cambodian national baseball team (hey, they seem to bleed blue too).

The Militant had a great time exploring Cambodia Town, he hopes to return here again. You, too should Khmer and visit this place. Just take the (M) Blue Line down to Anaheim Station, and walk or bike east until Junipero Avenue (just a few blocks past Cherry Avenue). Or, you can take the Long Beach Transit lines 45 or 46 bus (Fare is $1.25).
Commandeered by Militant Angeleno @ 11:19 PM

Good ish, a project of mine revolves around this little stretch. I know that they eventually want to get one of those signs welcoming people there.

Also...a little outside of CambodiaTown on Pacific Coast Highway, Sophy's has some great beef jerky. On Anaheim, in front of the old United Cambodian Center building, there's a general good food place called the Dragon Cafe.

http://camchap.org/ - The Cambodian Community Archive located at the Historical Society of Long Beach

Brian: Thanks for the tip and the link! Will check out then next time he's in Cambodia Town. Very interesting info. Definitely the organization with the LB address must have been the catalyst. Many immigrant groups will be attracted to a place where one of their own has already established themselves. It's like humankind's community-building DNA at work!

Don't worry about self-promotion, if ya got something we can all benefit from, then bust it!