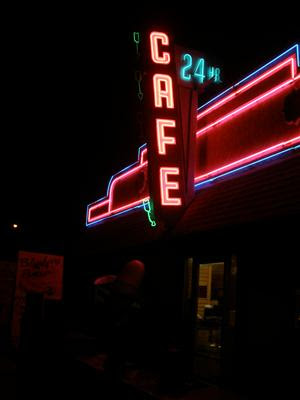 A few months ago, an out-of-town friend of The Militant came for a visit (Yes, the Militant can have friends from other cities, just as long as they don't diss this one!). She had a list of places to visit while here, so we wasted no time. After picking her up from the airport and dropping her luggage off at her hotel, which was somewhere around Torrance (somehow the online reservation made her believe Torrance was a lot closer to Los Angeles than it really is...), we parked at the (M) Blue Line Wardlow station to head up to Downtown Los Angeles to catch a Lakers game.

Part of this was to not deal with the driving up and down the 110, and Lakers game parking. The other part was to show her we really do have a rail transit system in Los Angeles.

After the game (which the Lakers won, woo-hoo), we rode the train back to Long Beach and, back in The Militant's car, searched for a place to eat. It was already past 11 p.m., and late night eats in the LBC, unlike Hollywood or Koreatown, were slim pickins.
After circling up and down Long Beach Boulevard, there were few choices available. As this was a visitor from out of town, national chain restaurants were a no-no. And even the venerable Long Beach Roscoe's was nearing closing time.

The Militant pulled out his unspecified smartphone and entered, "24 HOUR RESTAURANT LONG BEACH" 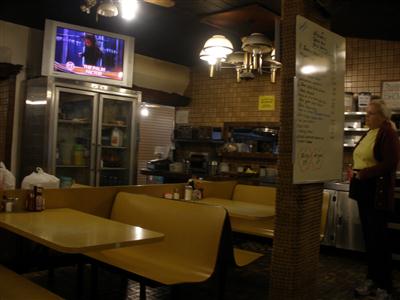 And one of the first results to appear was...The 24-Hour Cafe.

Sometimes the best answer is the most obvious one.

This cafe wasn't in Downtown nor the Belmont Shore area but in a relatively desolate area of West Long Beach - an industrial area just north of the Long Beach Harbor, on the northwest corner of Anaheim Street and Santa Fe Avenue.

In a part of Long Beach more populated by cargo containers, oil refinery tanks and industrial buildings than people, drive by and you'll probably miss it. But the cafe's proximity to the 100-year old harbor is actually its greatest unique asset. After all, the port is a round-the-clock operation and the cafe serves it appropriately. A port-area family-owned institution since 1954, 24-Hour Cafe has served port-bound truckers not just food but amenities such as a lounge, a game room, a pool table and hot shower facilities. 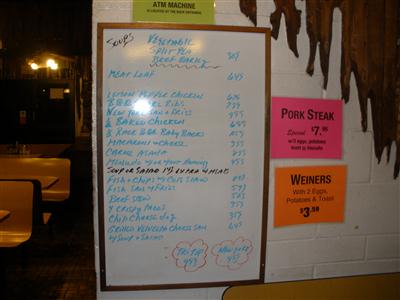 The Militant and his out-of-town friend had a nice meal (for the price), at really affordable prices (pictured left). The cuisine is largely American diner food, with some Mexican dishes. The staff was cool and the waitress was even able to tell The Militant how long the establishment has been running (she herself having been working at the cafe since the late 1960s). Ask any Denny's staff how long their company has been running and you're guaranteed to get a blank stare. 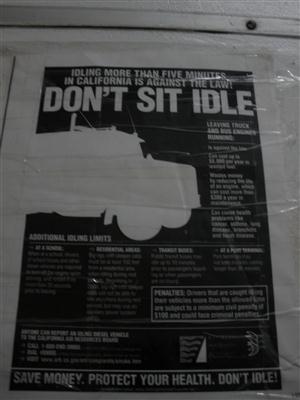 There was only one or two other customers besides The Militant and his visiting friend. Chats of gossip while a TV screen airing CNN were the only sounds in the place at this hour, save for the occasional passing truck along Anaheim Street.  Even The Militant's visiting friend got the whole port culture. Usually places like this would be located farther inland, such as along The I-5 past The Grapevine. But this is located towards the destination (or the origin) of a trucker's route. They are likely less tired, less weary. It's certainly an aspect of Long Beach life that doesn't get highlighted very much.

One their way out, The Militant rummaged towards the back of the restaurant, his eyes heading towards every sign of truck driver culture. One such thing was a bulletin board near the bathrooms. One flier reminded drivers that idling for more than five minutes was against state law (pictured right).

It was true Militant serendipity that he found this place. Now, the question of where to eat late at night the next time he's in the Long Beach/Wilmington area has already been answered. This place is definitely Militant-Approved. Good, affordable food, no 'tude and the place just oozes being local. And did The Militant mention they also have Wi-Fi? Definitely worth a return trip!

Should we expect a review of the T.V. Café in downtown L.A. sometime soon? http://www.yelp.com/biz/tv-cafe-los-angeles

soledadenmasa: Hmmm, The Militant has heard of that place but somehow keeps missing it! Will check out!

HAH! Can't believe you found that place! That's in a part of town that is "industrial," so most people don't go.

Best place on Earth to grab a coffee/meal before hitting the 710 at 4:00 A.M in the morning. Beats the hell out of the drive-thru at the "Jack in the Box" over on PCH.

The city shut the doors. How sad, I will miss everyone. Paul, Hot Rod, Jim, Mike and the best waitress/friends even. 10/2012

WHAT! The city shut your doors? Ah man, I am searching for the ultimate birthday party game truck Los Angeles and I was told that this was a good place to get recommends. Any suggestions?