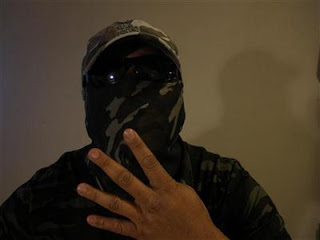 The Militant hasn't been that active on teh blogz lately, but he just wanted to take a little time out of his day to say that four years ago today, The Militant Angeleno blog began.

Normally every year on this date, the Militant does something interesting, or at least reflects on the past few years of Militancy in the City of Angels.

Four years is not exactly an eternity, but it is a considerable amount of time. If the Militant were an elected official, he would have served one full term. Are you more militant than you were four years ago?

Part of his inactivity is attributed to the fact that part of his job has already been done. The number of blogs and website out there in the local scene are much more in touch, more aware and more proud of the city they represent, and the number of bloggers and blog posts that represent the Uninformed-Los Angeles-hating-yet-you-still-live-here-WTF perspective are kind of rare these days.

And that's not just tooting his own horn. The site blogging.la has of late been doing a series highlighting its contemporaries in the local blog scene, entitled, Blogging (in) LA. About a month ago, writer Sean Bonner (Whom the Militant doesn't know personally, but has definitely been on quite a few group bike rides in the past...shhhh :)), wrote a touching paean to the Militant Angeleno's blog. Bonner went on to share his experience as a decade-long transplant to Los Angeles, but one that has learned to love, appreciate and defend his city (unlike most other transplants...). That meant a lot for The Militant to hear!

The quote of quotes read, "There is no question countless people in LA know more about their own city because of [his] efforts." The Militant won't put up a "MISSION ACCOMPLISHED" banner up on some ship in San Pedro harbor, but it definitely validates the reason why The Militant exists.

The Militant has definitely been a presence on Twitter (follow him if you haven't already!) and it's much easier to do, so in this day an age, he's more than just a mere blogger but a FORCE TO BE RECKONED WITH! He's even contemplating getting into Tumblr or something -- not to supplant the MA blog -- but to supplement it. He's even thought of doing his own podcast (locally-born/bred bands/artists, take heed!)

As The Militant alluded to at the beginning of the post, life has gotten in the way of blogging (but his real-life persona is no less militant, he will assure you). Sometimes life is too important to live than to write about.

But The Militant is by no means done, there are more journeys and issues to discuss. He has a list of them ready to go. Some of them take lots of time to research (much like his popular Sacatela Creek and Los Angeles Street Signs posts). Also, the next CicLAvia on October 9 will present an expanded route, which means an updated Epic Militant CicLAvia Tour!

If the Militant is starting out his "second term," then he wants to hear from his "constituents." No, not just "Nice post," but what you think The Militant has been doing right, has been doing wrong, places and issues you would like to see. Of course, The Militant doesn't answer to anyone and does whatever he feels like, but he does want to hear about something that will make him think, or at least inspire him. So, don't be afraid to comment on this post, email him or shoot him a Twitter message.

You know Sean Bonner huh? What about "Roadblock" or "Skull" or "Agent Orange"?

Anonymous: The Militant doesn't know Sean Bonner personally. He knows who he is though. He may or may not have heard of one of those three people you have listed!

Mazel tov, more on how transit is changing the city and making it more public and connected. More on the amazing ethnic pockets and how they are growing and integrating. Or just more. :)

Miles: Thanks for the feedback! You're one of the OG readers so The Militant will duly note your input!

As an on-and-off operative, I'd like to commend Comandante Militant Angeleno for four years of service to this great city. Now only if he can write more posts about the Valley. =)

Valleypinoy: Thanks, operative! The Militant will definitely write more about the SFV...though he needs some more leads from time to time...that's kinda what the operatives are for :)

In the meantime, check out this blog, written by a Valley native: http://valleydude70.blogspot.com

Satacela Creek was where I found you about a year or so ago and I totally enjoy whenever you decide to post, so keep at it, as time allows.

Here's to many more.

Angel: Thanks! Glad you enjoyed the Sacatela Creek post! The Militant is currently researching another hidden creek in the city (we have lots of 'em), so stay tuned!

Which blog do you write?

My apologies for my spelling on Sacatela Creek. I was going by memory and obviously my memory was wrong. It runs right behind where I work, so to say the least, that whole post fascinated me. I can no longer ride those streets, without thinking about it. King Middle School, really? ABC/Prospect Studios, Really? :-)