The Militant Eats Up An East Coast Transplant Alive 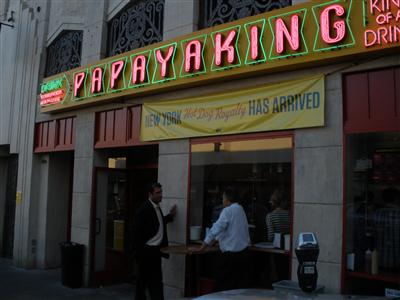 Lately, Hollywood has been abuzz lately with the arrival of one of its newest NY transplants, a hot dog stand called Papa Yaking. Very interesting. He's heard of Papa Cristo's, and even Beard Papa's, but a Papa Yaking is not something that sounds very pleasant, especially to eat.

Oh wait...The Militant has just been informed that the place isn't called Papa Yaking, but PAPAYA KING. The Militant's bad. 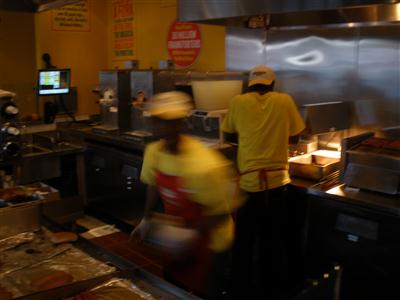 Apparently the story here was that was originally a tropical drink stand started in Manhattan in 1932 that eventually sold hot dogs. Hot dogs and papaya drinks, eh? Of course, this town is famous for a local restaurant chain that makes chicken and waffles, so who are we to laugh? Anyway, Papaya King prides itself on being "The Best Hot Dog in NYC", or on a national level, perhaps the second most famous weiner from The Empire State (BADA-BING!). Papaya King is such a revered local institution in NY, very much akin to how The Original Tommy's or In-N-Out is celebrated here.

Of course, now we have a Papaya King on Wilcox and Hollywood, and the nearest In-N-Out to NYC is still a couple thousand miles away. Nyah.

The Militant skipped the long lines during its opening week last month and decided to see what all the hype was all about.

First off, the Militant rode his bike there and there was no place nearby to conveniently lock it, so he brought it inside the already-cramped store. But they were totally cool with The Militant bringing in his bike into the place so he had to give his props for that. 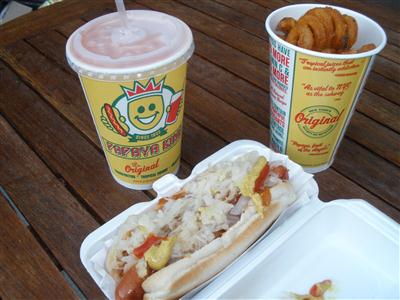 After browsing the menu wall for several minutes, he decided on "The 1932" (#5) combo - a hotdog with sauerkraut, NY onions or relish (he had the first two and paid a quarter extra), a medium drink (he chose the papaya drink of course) and a cup of seasoned curly fries.

The hot dog was good. It wasn't horrible. In fact he did enjoy it. But it wasn't anything special or unique, just a well-made basic hot dog. But he did enjoy the most unique aspect of Papaya King: the tropical drinks. The papaya drink was good. In fact, he ordered another - just the drink, this time a large mango drink.

On one of the walls, written in big-ass lettering is, "WE'RE 100% NATURAL BUT WE THINK WE'LL FIT IN L.A. JUST FINE." Oh was that supposed to be funny? The Militant forgot to laugh. Hah hah hah.

Um, yeah. Very offensive. But funny they mention "natural," since as good as those tropical drinks are, they come from not a blender, but from one of those constantly-churning daquiri-type machines. How natural are those tropical drinks? The Militant shrugs. Maybe they come in pre-mixed canisters shipped over from NYC. Or maybe they're partly in powdered form from a box. Who knows. He will tell you that if you want a real natural tropical fruit drink, just walk a couple blocks east on Hollywood Boulevard and hop on into The Juices Fountain - a real Hollywood institution - and they'll actually put real fruit in the blenders right before your very eyes. Absolutely no frontin'.Yeah, go ahead and make jokes how Hollywood is "fake" and "artificial," but when we do natural, like a hike in Griffith Park, we don't f around.

The Militant will be fair here, Papaya King is a pretty good meal for a pretty good deal. The #5 combo only cost The Militant $6 and some change. Not bad at all. If you're in the area, it's worth going to, especially after a concert or a night in the clubs. This place is open until 3 a.m. (the original NYC location closes at 2 a.m. in comparison), which is really awesome for a Hollywood eatery that's not a Thai restaurant.

But is it worth going out of your way for? No. Was it worth waiting in the long lines during opening week? Haha, nope. The Militant was glad to be only the third person in line when he arrived. Of course, for all you NY transplants, Papaya King probably functions as some sort of homesick therapy clinic of sorts, unless you're willing to bitch and moan that "It's not the same as back home" once you took your first bite. The Militant can't help you there.

But now that Papaya King has arrived, it might as well be a good neighbor to all the other hot dogs in town. So how does it size up? Is it better than a Pink's? Naaah. Going to the little stand on La Brea is a local ritual, and usually you'll get something considerably-sized after waiting in line for so long. Better than Carney's? Yeah, right. Better than an Oki Dog? Don't make The Militant laugh. Better than a Dodger Dog? If it's a grilled one at the Stadium, then no. Better than a sidewalk cart bacon-wrapped dog? Are you kidding? (Papaya King is is healthier by far though). Better than Der Weinerschnitzel or a month-old 7-Eleven cooking-for-a-month dog? Aw hell yes.

Honestly, if you're craving for a hot dog and a tropical drink in Hollywood, The Militant will recommend a dog from Pink's and a smoothie from The Juices Fountain. Of course, the problem is that those two venerable Hollywood food stands are a little over two miles apart, the former has a long line and the latter closes at 5 p.m. Papaya King does offer the convenience of both in one place though. So there you go.

So, welcome to Los Angeles, Papaya King. Just be polite, don't be afraid to be a part of the community, respect the locals, don't whine and no one gets hurt.
Commandeered by Militant Angeleno @ 3:55 AM

"Papa Yaking". You crack me up.

One of my favorite LA blogs - keep it up!

What is it with NYers and their damn hot dogs? All natural - does anybody even know what is IN those hot dogs? Ingredient list probably reads like the Periodic Table of Elements.....

The Maker Monk: Congrats! Your comment finally made it on the page! Guess Blogspot finally realized you're not a spammer after all :)

What is it with NYers and their damn hot dogs? Well, it's part of the four basic food groups: Hot Dogs, Pizza, Pastrami and Bagels, lol.

Ah, judging from the insulting advertising line they've run on billboards, this place is aimed at NY transplants living in and around Los Angeles, and mid-western tourists spinning by on the top deck of open air, double-decker buses.

Wonder how long they're gonna last...

Cyrus: Right on! Although, since PK isn't really directly competing with anyone (they do have chili dogs, but it's not really their main thing), they do have potential for staying power. Which is a better situation than, say, Five Guys Burgers, which totally have no business being in this part of the country to begin with!

Hey Militant, you forgot about Skooby's, right down the street. Or are you not a fan?

Anonymous: No you're right, he can't believe he forgot that. Hmm, maybe time to do a Battle Royale comparison!

Just as I thought. Thanks, you saved me a trip.

As an East Coast transplant myself, I was always more of a Grey's Papaya Man myself.

The appeal was never the taste, just the cost and availability. I never thought it was a good idea for a Papaya King in LA.

Was in Hollywood last night, around 11:00 P.M, not too far from Wilcox. Needed a late snack at about that point. Figured I check the place out. Why not?

I went inside, to find myself pretty much alone in the store. The only other people not actually working there was some transplant "Naw Yawker," babbling about how great this place was and how he couldn't find anything decent like this in LA, all to some other fellow who seemed he could care less, but was listening politely anyways.

Some observations of my own...

The place sits tucked off of Hollywood BLVD, on Wilcox, which at that point is almost like an over-sized alley. This is all done by psychological design, and let me explain why. The restaurant has no real outdoor seating, minus what looked like some kind of retractable stand-up bench. It's location and external facade was done explicitly to resemble an establishment one would find in New York city, regardless of what kind of food is being sold. It was made to invoke a certain "feel," and aimed at a certain crowd that would immediately recognize that "feeling."

I shot over to Pink's, where there was probably fifty people waiting in line ahead of me. I had a good time shooting the breeze with total strangers at various stages of "painting the town" that night. Better than listening to some ex-New Yorker spout all his displeasure with Los Angeles, and everything in it.

I live in the LBC, so getting over to Pink's is a rare event for me. Hence, I didn't mind the wait. I had the chili dog with sauerkraut, and enjoyed it on Pink's outside porch, under the cool night sky. The way it oughta be.

On a side note, I bet "Papa Yaking" will be a big hit chain in Orange County...

It is good post.keep up it.