The wonder of Los Angeles - and Southern California as a whole -- is that even an experienced militant like The Militant Angeleno himself, who has studied and researched more Los Angeles area history than anyone cares to know, will still get stumped and learn something new.

Take for instance his penchant obsession for researching Pacific Electric Railway relics. He thought he' seen it all, until he perused this video on teh YouTubez which identified one of the main locations for this classic Snoop Dogg vide-izzle:

(Feel free to play and listen to while reading...dude, it's MF'ing Snoop after all...)

What appears to be a sunken trench and an underpass is a curious-looking concrete bridge supporting Orange Ave. and East Hill Street in Long Beach, just near the Signal Hill border. That sunken trench was once the Pacific Electric Railway's Newport-Balboa Line, which branched some 22 miles from the Long Beach trunk line from where today's Willow (M) Blue Line station currently stands all the way down the coast to Balboa Island in Orange County. The 40-mile trip from Downtown Los Angeles to Newport Beach was traversed in 70 minutes. The line ran from 1904 to 1950. Unlike other bridges that cross over former PE right-of-ways (like this one in Mid-City Los Angeles on Venice Blvd), this bridge carried an entire intersection, a virtual anomaly when it comes to bridges, especially old ones.

So naturally, The Militant had to go check it out for himself.

On Thursday of last week, The Militant took his trusty bike on the (M) Blue Line and rode down to Willow, and rode due east on that street for a couple miles, turning south on Orange. Lo and behold, there it was: 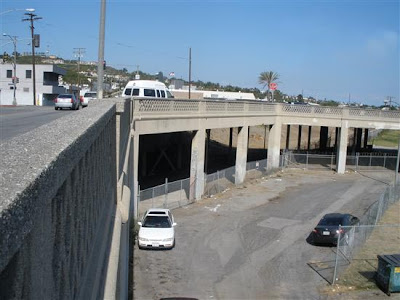 It's a strange kind of bridge, meant not just to cross the tracks but to allow cars to negotiate the topography from the flatlands of the south to the more elevated region to the north.

The heavily-weathered and tagged builder's plate, located at the start of the E. Hill St. approach, reads:

GEO. E. BARTLETT
CONSTRUCTOR
LONG BEACH
1932
The Militant headed down towards the bottom of the nearly 80-year-old structure, in an alleyway of sorts to peer into what used to be. Protected by a chain link fence, it looked like what an abandoned rail right of way looked like -- the usual juxtaposition of modern urban graffiti and architecture from decades long gone: 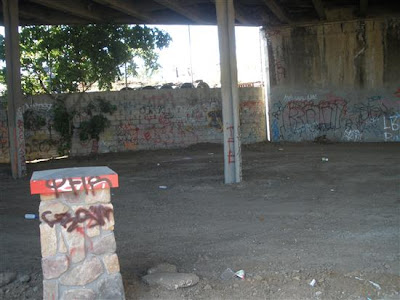 The tracks ran lengthwise, and the concrete-block wall in the left half of the photo was a more recent addition. Beyond the wall, the tracks went northwest towards the Willow junction. Towards the right, the tracks continued on to Newport Beach. Unfortunately the bridge structure is devoid of any remnants from the Pacific Electric era, such as trolley wire infrastructure, track, rail spikes or signals (it's been some 60 years since the last train ran through here, after all...).

The right-of-way trench would often resemble a makeshift creek during rainy seasons and would be overgrown with not just weeds but riparian plantlife. Locals used to call it "the swamp" and even recall catching frogs there (or would those be called "Froggs?").

Nowadays, part of the right-of-way has been paved over, and relegated to quasi-industrial uses like junkyards or public storage facilities. However, a great deal of the former trackage towards Newport Beach from this end still looks barren.

Seventy minutes from Downtown Los Angeles to Newport Beach...with stops? Granted, there was hardly anything in between the stops back then, mainly oil fields, farms and wetlands. But it's a wonder why this precious right-of-way was never considered to be used for future transit proposals (The reason why is because it was not owned by the PE's property successor, the Southern Pacific Railroad, as properties like the Exposition right-of-way were). 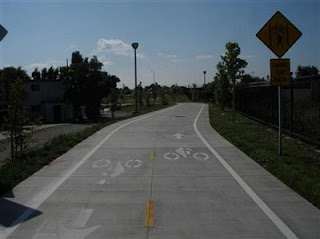 The future of the old Newport right-of-way was discovered during The Militant's visit. Heading back towards the Blue Line after his Militant mission, he happened upon a short (50-foot) bike path, which led him across Hill to a sharrowed Lemon Avenue, which led to a newly-built park containing an exclusive Class I bike path (pictured left). WOW! Long Beach is AWESOME! The Militant can just ride this back to the Blue Line! So he rode and ro...oh. 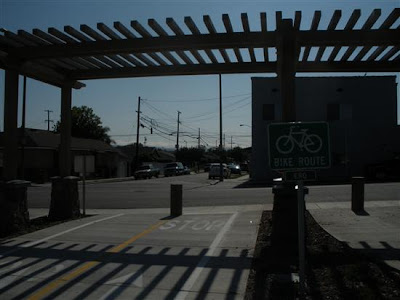 All was not lost though. The craftsman-like pedestals on the bike path end structure are exactly the same as the pedestal in the above picture of the under-the-bridge shot. So apparently what The Militant rode on is just the start of what would be a longer bike path, which may or may not take over the entire right-of-way. If the Militant can't ride a train to Newport Beach, then riding his bike from Long Beach is the next best thing. 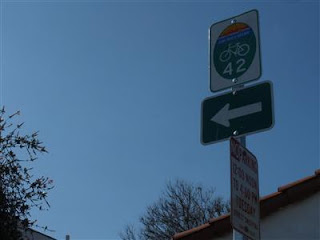 Forced to ride in the street, he headed due west on 23rd Street and soon found some of these on the way...bike route signage (pictured right). Hmm. So he followed them and soon found himself back on Long Beach Blvd, just south of the Willow Station. Hmmm. Should The Militant hop on the train back to Los Angeles, or continue biking?