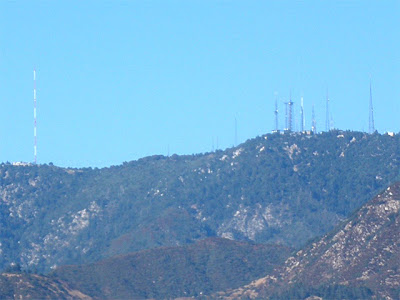 When the Militant asked his readers yesterday what was the second-tallest manmade structure in the Los Angeles area, he knew people would answer the obvious response of Downtown's Tower Formerly Known As The First Interstate Bank Building (a.k.a The AON Center). At 858 feet above the streets, it gets the silver medal in height in our skyline.

But a militant knowledge of this city yields familiarity with the unfamiliar. A reader named BradleyB was able to correctly identify the CBS Broadcast Tower atop Mount Wilson (the structure on the far left of the picture above) as the second-tallest manmade structure in the Los Angeles area. At 972 feet above Mt. Wilson's ridgeline, it's 114 feet taller than the AON Center and only 45 feet shorter than the US Bank Tower. The CBS tower, which is supported by guy masts, allows Southern Californians to watch KCBS 2 and KCAL 9 and listen to KNX 1070, KFWB 980, KLSX "FreeFM"97.1 and other CBS-owned broadcast stations. While it may not look that tall up there, it easily dwarves the other, older broadcast towers several yards to the east. The second-tallest broadcast tower on Mount Wilson, the NBC Broadcast Tower (on the far right of the picture above), is only 545 feet tall (a bit taller than the Ernst & Young Plaza in Downtown).

Our skyline in the sky, high atop the mountain named after a former mayor of Los Angeles is unique among most metropolitan areas. Whereas other cities rely on broadcast spires atop their tallest buildings (i.e. the CN Tower, The Sears Tower, The Empire State Building), and other parts of the country rely on even taller broadcast towers in the middle of the plains, Mt. Wilson is close enough and high enough to deliver signals to a large, expanse area. Which, in a way, it was partly responsible for. The broadcast power of Mt. Wilson helped define our megalopolitan sprawl, as it allowed cities far and away to be part of the Los Angeles media market.

So congratulations, BradleyB! You win a...a...uh...(the Militant, nervous, turns to his legal team). Um, well, sorry BradleyB, we didn't prepare an actual prize this time, but tell ya what - you're free to let others know that you possess l337 Militant Knowledge on our City. How bout that?
Commandeered by Militant Angeleno @ 1:10 AM