East Is East: The 'East of Eden' Art Exhibition At Barnsdall Park 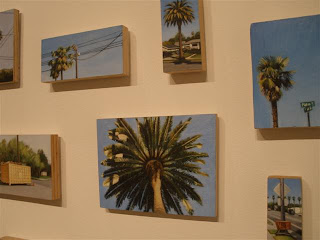 The Militant isn't an art scenester, but he does appreciate a good exhibit when he sees one. When one of his operatives told him to check out this weekend's exhibition at Barnsdall (don't pronounce it "Barnsdale") Art Park's Municipal Gallery, a multi-gallery show entitled East of Eden, he decided to do some Militant research. So off to the website he went.

And there went the description:

"East of Eden will focus on contributions of Los Angeles galleries, the cultures from which they draw inspiration and the eastside of L.A. as an important source for contemporary art."

Then he did further research on the galleries represented: places like La Luz de Jesus in Los Feliz, Black Maria in Atwater Village, Ghetto Gloss in Silver Lake, Bert Green Fine Art (now why does that name sound awfully familiar? Hmmmm.... ) in Downtown...

Oh you know where this is heading!

But the Militant thought that raising a ruckus at this event over "The 'E' Word" would be self-defeating. Especially since ir would be that much easier to unmask the Militant. Bleah...

But the Militant went anyway, trying to apprehend the situation with an open mind...

...Disregarding the incessantly-annoying "'E' Word," the bigger question was...does this art represent contemporary Angeleno art? Or is it just a smattering of ironic hispter fodder? 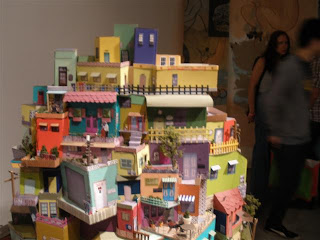 The Militant is no art critic, nor does he claim to possess an art critic's vocabulary, but in short, the art was very representative of contemporary Los Angeles art. There were pieces that had obvious iconography or images like palm trees, coastal Malibu seascapes, or a painting of a trio of cholas hanging out, but even outside of that, on a more visceral level, there was an attitude that the Militant didn't have to find a challenge to identify with.

The biggest complaint was the duration of the exhibit. It opened on Friday and by the time most of you read this, it had already closed. Which is unusually for Barnsdall exhibits, which usually last a good three months.

The Militant hopes they do this again. He understands their intention is to promote the (cough, gag, ack) Not-Really-The-Eastside art scene as a reaction to the Westside arts "establishment." But Westsidecentrism is soooo late 20th century. Why not drop the "Eastside" thing, these artists can basically stake claim on the whole City now, Westsiders be damned.

Oh yeah, one more thing before this post closes. One of the pieces gave the Militant a "giant" smile: 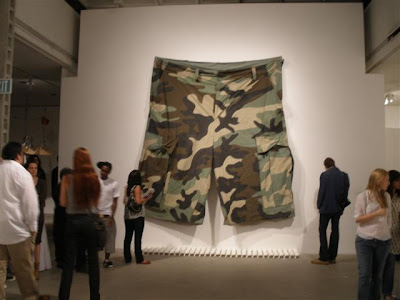 On the first night of the show (Friday), there was a table outside with a large map of LA upon which people were encouraged to provide their opinion on where the East/West divide was located. This to me was evidence of an openness to the different ideas that people have about the east/west issue.

I pointed out (and marked on the map) the fact that Main Street was the divider between the east and west street addresses, which amazed the people sitting at the table (whatever).

They had no idea that the city had already been set up with an east and a west side.

Not sure it made much of a difference.

bgfa: Very interesting. The map was nowhere to be seen on Saturday night. Wonder what people did with it. One of the Militant's operatives reported to him that the organizers have already gotten some heat over their "Eastside" insistence (without the Militant's intervention), and latter promotional materials read something like "Los Angeles East" rather than mentioning the "E" word upfront.

Of course, people familiar with this here blog already know that there is no such absolute dividing line between "Eastside" and "Westside."

I can tell you on good authority that the organizers did know of the "Eastside" debate and included it as a description AND a point of contention from which people could continue the discussion, both from a art media and a cultural point of view.

Delab (Design East of La Brea) has the map.

Okay, now I am pissed off - why so short a run? I wanted to SEE this?

Who has a show open for a weekend? WTF

Hollarback: You're totally correct. The Militant has since learned from his operative sources that this was a first-of-its-kind multi-gallery exhibit and they wanted to make a short-but-loud splash by having it at Barnsdall. Also, aside from some community sponsorships, this was more or less a DIY effort by the galleries, as compared to other longer-term exhibitions, which usually receive larger sums of funding. Word is that they hope to do this again, and for a longer duration.

Why is the issue debatable? Most of the folks who live in Los Angeles know where the Eastside starts. Why is it so hard for these other folks to understand? Is it that they don't want to look foolish for being so wrong?

The map from the event has been blogged at: