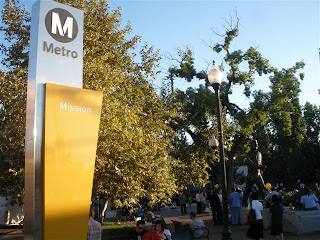 The Militant has been on a CFM (certified farmer's market) trip lately. Back in July, he took you to Highland Park, right off the (M) Gold Line to visit the Old L.A. Farmer's Market, which goes on every Tuesday. Today, he takes you to the next station up the line to the Mission West Farmer's Market in South Pasadena, which happens every Thursday (that's like, today).

Having passed by this FarMar (no, not that one) many times in the past, the Militant got off the train last week and wanted to see what all the action was all about. Unlike the laid-back neighborhood chill of OLAFM, this one's has a more dynamic, festive atmosphere, almost like a mini-town fair nestled in the small-town USA quaintness of Southpas.

Which is why the Militant visit this place with such curiosity - and scrutiny. The small-town USA quaintness of this little burg sandwiched between two of Los Angeles County's largest cities gives the place not only character but makes it a regional anomaly, especially since the town has been notorious for its reputation of racism and quasi-NIMBYness (which threatened to delay or impair the Gold Line prior to its opening, though they have STFU since then). What the Militant found was hundreds of people, of all ages and colors, milling about the T-shaped market grounds. Despite the "Mission West" moniker, the farmer's market actually takes place on Meridian Avenue and El Centro Street. The Gold Line trackage runs diagonally to the northwest, and the mini-park right outside the northbound platform is family area of parents chillin' out with their little tykes, right next to a row of pi-shaped bicycle racks filled to capacity. Yes, tykes and bikes (The Militant admits that he thought of another demographic that rhymes which would complete the trifecta, but he didn't see any, so therefore he won't have to go there). On this last Thursday of the summer, the Militant basked in the undeniably positive vibe of this weekly gathering. 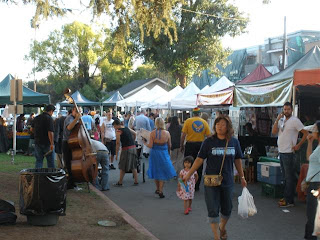 There were food booths galore: Mexican, Peruvian, Greek, BBQ, Vegan, Italian, Chinese, kettlecorn, corn on the cob...if you're hungry on a Thursday afternoon, this is definitely the place to be. There's live acoustic music performed in and around the Meridian median, and the "Watering Hole" stone structure situated there has been turned into a teen hangout of sorts - the Militant loves it when Southern Californians make use of their public space.

Along El Centro, the mainstay of the market, the produce booths, take hold. Here, most of the fruits are in the $1.50-$2/lb range. The Militant bought a bunch of huge-ass-sized white and yellow peaches, which he later gave some to his parents, to which Militant Mama was impressed by their sweetness.

Seen mulling about on the market grounds were campaigners for both of the major presidential candidates, this being a high-visibility area. He was accosted by one of them holding a clipboard, to which the Militant informed him that he was already supporting the unspecified candidate and was alredy registered to vote. But the campaign dude was knockin' the Miltant for a $100 contribution, and the Militant told campaign dude that he had already donated an unspecified sum of money to the unspecified candidate. Campaign dude kept drilling the contribution and listed several worst-case scenarios. The Militant told him he already contributed, and then ultimately told campaign dude to screw off. Besides, how can he guarantee the money would go straight to the unspecified campaign? So no matter who you support, just don't waste your time on these fools, and if you want to contribute, then do so on the candidates' websites instead.

One major complaint the Militant has to convey is the lack of restroom facilities onsite. After holding on to the bars and railings on the Gold Line car, the Militant really needed to wash his hands before he handled any food. Don't bother going to the nearby (fru-fru) restaurants on Meridian and El Centro, like a certain unspecified French restaurant, they'll just tell you to go focault. He was, however, able to find such a facility nearby at Buster's Coffee and Ice Cream Shop, a short walk across Mission Street. Their restrooms are upstairs and the people there were cool to the Militant. So if you take your break there, show them some support by buying a coffee or a scoop or two of Fosselman's ice cream.

With great food, a great crowd and a great vibe, Southpas' Mission West Farmer's Market is one happening place. The Militant will definitely return.

The Mission West Farmers Market is on every Thursday from 4 - 8 p.m. along Meridian Avenue and El Centro Street, next to the (M) Gold Line Mission Station. The Militant may or may not be there today - but you oughtta be!
Commandeered by Militant Angeleno @ 9:37 AM