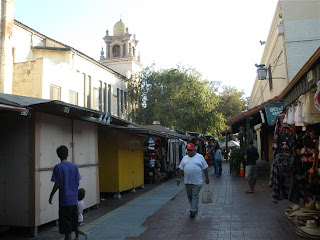 The Militant made good on his promise to take a stroll through El Pueblo State Historic Monument and neighboring Olvera Street on the evening of Thursday, September 4, as a little celebration of Los Angeles' 227th birthday (at around 5:30 p.m...were you there? Because the Militant was, heheh)... Of course, only a Militant would take time out of his busy militant schedule to observe it. He had a lot on his mind that day, especially since the Los Angeles Times mentioned the birthday and our perceived collective attitude towards our own history. 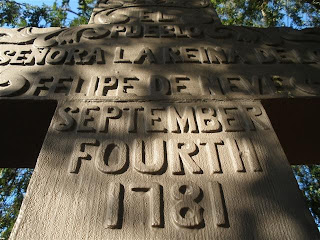 Olvera Street was mighty quiet, ironically silent on the exact date emblazoned on the landmark cross at the street's southern entrance (pictured right). Still it emanated the familiar scent of leather goods, churros and roasted meats, the same way the Militant has always remembered it.

There was, however, a banner that read "Street Fair" on the southern end of the Plaza, and a bunch of people milling about. There was a popcorn cart and some barstools set up off to the side.

But alas, this was no real street festival. It was...the filming set of a Bud Light commercial. Yeah, go ahead, insert your favorite Los Angeles cliches here... 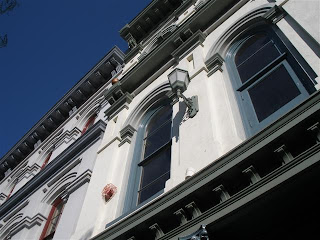 Yet that didn't dampen the Militant's spirits. He pondered about history and looked at the buildings surrounding the filming set. The Garnier Building. The Pico House. Historically significant buildings from Los Angeles' original town square dating back to the late 1800s that still stand today. He's seen them before of course, but perhaps for the first time he stood in awe of their architectural aesthetics. Granted, they don't have the historical maturity of, say, the Independence Hall or the Parthenon of course, but for all the talk about Los Angeles destroying its history - that's not totally accurate. Parts of the Ballona Wetlands near Playa Del Rey look the same as they did when the Tongva people roamed the land (of course, not all of it...). They're still there, waiting for your appreciation, ready for your willingness to fight to preserve them even further.

There was no huge celebration on Thursday, but perhaps that's okay. Have you ever been to a good friend's birthday party where multitudes of people were invited, and you only had a few minutes to spend with the celebrant? Conversely, a small, intimate gathering of close friends for a birthday celebration gives you ample time to spend with the celebrant, and you get their undivided attention. The Militant's little walk through Olvera Street was the latter.
Commandeered by Militant Angeleno @ 12:11 AM